1755 The NOAA has released a rather striking graph of US temperature anomalies in the last 109 years. We’ll let the data do the talking…via @climatebrad 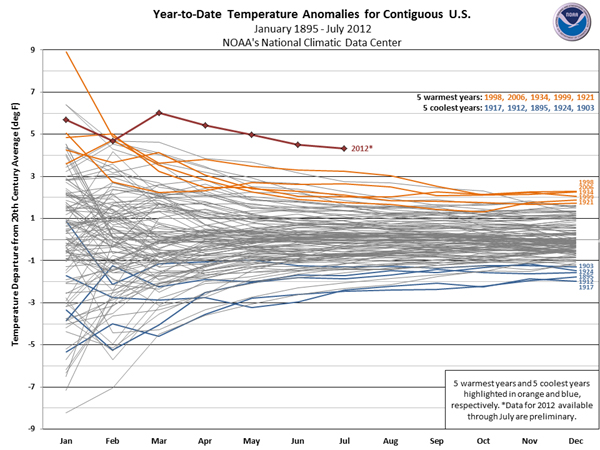 1600 More on Stern-gate. The African Group of countries at the United Nations climate negotiations have released a statement reacting to Todd Stern’s suggestion that the 2C climate change target isn’t the be all and end all. Stern has  clarified his comments (scroll to the bottom of the page)

“Africa is at the forefront of climate impacts; science shows that temperatures rise here is approximately 150% the global average, so even a 1.5C global target could mean over 2C for Africa.”

“That means the destruction of crops on a huge scale, as has occurred in the of heatwave that the US is experiencing today. But in Africa these crops belong to subsistence farmers and the result is  devastation and famine. This is not a game with numbers; its a question of people’s lives, and so I am not sure there is much space for the ‘flexibility’ Mr Stern has spoken of.”

“It is concerning that the US would now question the global goal it pushed for, and has agreed to numerous times internationally. It is more disappointing that in clarifying its position the Obama administration has said it ‘supports’ the goal but does not support an approach that guarantees achieving it.”

1500 Canada has announced that it is half way to meeting its CO2 reduction targets set out in Copenhagen in 2009. Environment Minister Peter Kent told a press conference that the country had achieved half of its target to reduce emissions by 17% in 2020 compared to 2005 levels. The country is strongly criticised for withdrawing from the Kyoto Protocol and its exploitation of tar sands oil, which creates more emissions than other fossil fuels versus the energy output.

1345 Some spectacular images of the Three Gorges Dam from the Chinese News agency Xinhua. The sluices have been opened to raise the level of the reservoir. Last month the final turbine was finished ending the dam’s 18-year construction. 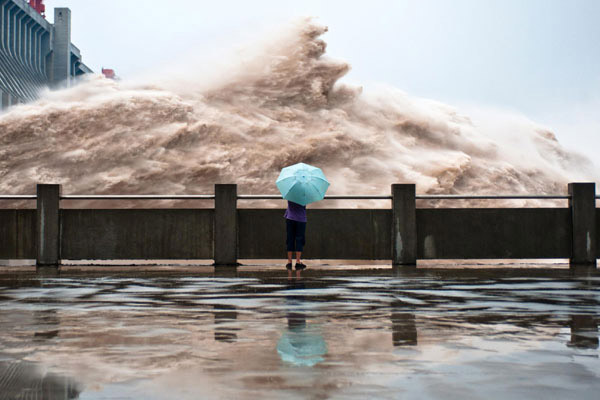 1225 Canada sought a “low-profile” at a recent meeting of the Intergovernmental Panel on Climate Change (IPCC), the body that provides scientific advice to the UN climate change negotiations. A leaked memo shows that Canadian participants were asked not to comment on at the conference on links between extreme weather and climate change.

1205 China has extended its 2015 solar power targets by 40%. The country has become a key player in solar power not just as a manufacturer, but also as a user. The new target is 21 GW, which would make the second largest solar producer behind Germany (25 GW).

1000 Senator Reid added in the subsequent press conference that Production Tax Credit for renewables (see our Iowa wind farm story), will be renewed by Congress after all. They’re going to try to do it before the election. I guess that makes it harder for Romney to ditch as he has promised.

0948 ‘Polarised’ is one way to describe the climate debate in the USA – and here’s Senate Majority Leader Harry Reid (D-Nev) speaking at a clean energy conference yesterday. He says your ‘average’ American is well aware of the dangers of climate change…(it’s worth noting that Reid is not what you might describe a shy and retiring character)

The seriousness of this problem is not lost on your average American. A large majority of people finally believe climate change is real, and that it is the cause of extreme weather. Yet despite having overwhelming evidence and public opinion on our side, deniers still exist, fueled and funded by dirty energy profits. These people aren’t just on the other side of this debate. They’re on the other side of reality. It’s time for us all – whether we’re leaders in Washington, members of the media, scientists, academics, environmentalists or utility industry executives – to stop acting like those who ignore the crisis or deny it exists entirely have a valid point of view. They don’t.

0938 Payment for Ecosystem Services was a major theme of the Rio+20 talks – it’s effectively a market-based mechanism that aims to put a price on the air we breathe and water we drink…but there’s also a moral dilemma over valuing the trees and fields. How much is a tree worth? George Monbiot has penned a strongly worded article on this subject in the Guardian – here’s a taster:

It diminishes us, it diminishes nature. By turning the natural world into a subsidiary of the corporate economy, it reasserts the biblical doctrine of dominion. It slices the biosphere into component commodities: already the government’s task force is talking of “unbundling” ecosystem services, a term borrowed from previous privatisations. This might make financial sense; it makes no ecological sense. The more we learn about the natural world, the more we discover that its functions cannot be safely disaggregated.

Here’s a view from a supporter of payments for Ecosystems Services who emailed RTCC – they work with the UN and would prefer not to be named – but I think it’s worth hearing the opposing side of the debate:

Valuation is firmly considered the best (and only) possible solution to the ongoing devastation of natural resources worldwide. Interestingly enough, the proponents of ecosystem services valuation are mainly ecological scientists, followed by ecologically-converted economists. And not mainstream economists who currently advise governments, financial institutions and businesses….

So the US supports the 2° goal but doesn’t support the necessary action to achieve it? Talk is cheap…

0855 US Special Envoy for Climate Change Todd Stern says his comments regarding the merits of a two degree guarantee in the UN climate negotiations have been misunderstood. In a speech at Dartmouth College Stern had suggested that insisting on the two degrees stipulation could lead to deadlock.

But in a  statement emailed to RTCC last night Stern said he wished to clarifies those comments:

“There have been some incorrect reports about comments I made in a recent speech relating to our global climate goal of holding the increase in global average temperature to below 2 degrees Celsius.  Of course, the US continues to support this goal; we have not changed our policy.  My point in the speech was that insisting on an approach that would purport to guarantee such a goal — essentially by dividing up carbon rights to the atmosphere — will only lead to stalemate given the very different views countries would have on how such apportionment should be made. My view is that a more flexible approach will give us a better chance to actually conclude an effective new agreement and meet the goal we all share.”

The UN climate talks have a target of keeping global warming below 2C – this is a core objective of the UN climate convention, to prevent “dangerous” climate change.

0845 Morning all from a cloudy London, with a slightly golden tinge. I know this is a bit off message, but TeamGB have secured their largest haul of Olympic medals in over 100 years. There, I’ve said it. Now back to work.