The UK wind energy sector has received a much needed boost with the announcement that Dong Energy has purchased 300 Siemens turbines. The purchases could produce just less than 2% of the UK’s power needs.

The carbon price has collapsed in Europe to less than €3. The latest drop is off the back of news that details of an impending tweak to the system have been delayed.

British firm Good Energy is pushing ahead with plans to build a 225 acre solar farm. It would be the largest in the UK.

UN Secretary General Ban Ki-moon has praised China’s work on sustainable development during a visit to Beijing. “China has taken up this challenge as energetically as any other country in the world. It is already a leader in wind power,” said Ban. “It is the world’s largest solar manufacturer. China is doing this through far-sighted use of incentives, subsidies, and regulations – through smart policy-making.”

The EU Energy Commissioner Günther Oettinger has said the bloc is putting itself at a competitive disadvantage because of its failure to “take risks” with oil and gas drilling projects. He said that while they are happy to drill in the Gulf of Mexico and exploit tar sands for their own use, the is left with an oil import bill and high taxation.

A technique that adds iron to the ocean to trigger a plankton bloom in order to store more carbon in the seas has been given a seal of approval by a new study. The research has shown the practice could work, with the dead plankton sinking into deep water storage for centuries.

‘Belief’ in climate change in the US has risen by 70% as a result of the recent heatwave. Despite those results, a separate study found that only 1 in 5 of so-called ‘Generation X‘ adults feel the same way.

Denmark has announced plans meet half the country’s electricity needs with wind power by 2020.

Question of the day

What will it take to make an electric Nissan Leaf as cheap as a Volkswagen Golf?

A chunk of the Petermann Glacier in Greenland has broken off, here’s NASA’s best shot of the difference. The lost ice area is twice the size of Manhattan Island. 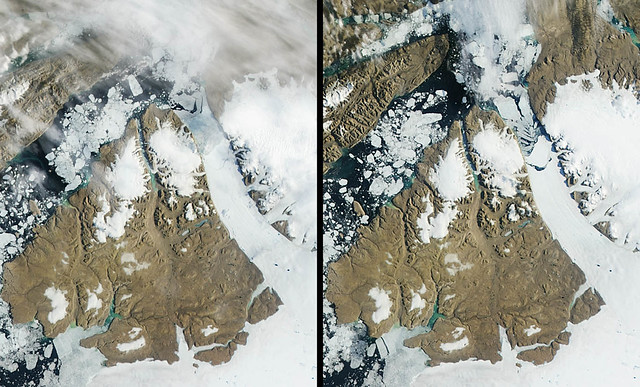 Noah’s Ark would never make it through a GOP vote. A large scale transportation project to protect wildlife, based on climate change.

You do realise, if we sorted the EU carbon price we would not need these endless, debilitating rows over subsidies… businessgreen.com/bg/news/219284…