On the site tonight

How green is London’s new cable car? Our intrepid reporter @rtcc_tierney has been to investigate the pods that will be all the rage during the forthcoming Olympics

Part 2 of our Circular Economy features: It’s an oddly logical concept. Create products that can be used again when you have finished with them. But how easy is this to execute?

And a big pat on the back to the Canadian Youth Climate Coalition. Their ex-film star of an environment minister Peter Kent may be doing his best to make Canada the bete noir of the green world – but not this youth group.

Closed sessions at the Petersberg Climate Dialogue – even three big tweeters, Connie Hedegaard, Christiana Figueres and Claudia Salerno are quiet. If we hear more later we’ll post it here and on Twitter.

In the UK Energy and Climate Change chief Ed Davey is under fire after the government delayed a crucial decision over wind farm subsidies. Apparently there is a ‘stand-off’ between the Chancellor and Deputy Prime Minister Nick Clegg.

Davey is under fire as some reports say he had agreed in principle to the cut. The result is that millions of pounds of investment are on hold. This a day after Davey explained to fellow ministers in Berlin how they could follow the UK’s move to a low carbon economy.

Venezuelan climate negotiator Claudia Salerno has tweeted this picture from her position at the Petersberg Climate Dialogue – check out the selection of drinks they all have. On a more serious note – Salerno made the point in her own presentation that Venezuela is proof that you can be a major oil producer and investor in renewables (she tweeted: renewables 70%). Although in a sense the real challenge lies with states that consume gallons of oil – rather than those who produce it. 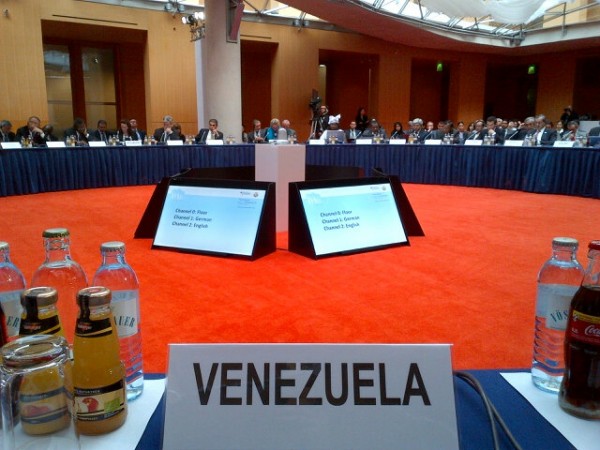 German Chancellor Angela Merkel has warned leaders at the Petersberg Climate Dialgoue that time is running out to come to a global deal. Delegates at the Berlin summit are discussing how the world can avoid a rise of 2C above pre-industrial levels. Germany is one of the most advanced nations when it comes to renewable energy and efficiency measures, but even its own Environment Minister Peter Altmaier has questioned whether the country can achieve its  climate goals.

The Department of Energy and Climate Change is in charge of UK plans to cut emissions – but big questions have been raised about its ability to do the math. Have a read of this article on the website Carbon Commentary.

Meanwhile former US Vice President and long-time climate campaigner Al Gore says time has already run out – for the USA. The USA’s Department of Agriculture has named over 1,000 counties in 26 states as disaster areas. Gore says “this is what the climate crisis looks like“.

The UK is experiencing the opposite to the US at the moment – incessant rain. The country’s Met Office have released a statement and video trying to explain whether or not this rain is connected to climate change – have a look and make your own mind up.

Greenpeace UK say they shut down 77 Shell petrol stations yesterday in protest at the company’s plans to start drilling in the Arctic. A Greenpeace spokesman said: “An oil spill in the Arctic would be catastrophic for wildlife such as walruses and whales, and Shell knows full well that it would be impossible to clean up after such devastation. The Arctic must be saved, and made a global sanctuary where oil drilling is banned.” Shell have extended the offer of a ‘productive dialgoue’ with Greenpeace.

We’ve had a go on London’s new Cable Car to see if it is worth the hype… and also to test its green credentials!