RTCC’s Ed King takes a look at what the recent outages at companies including O2, NatWest and Amazon could offer in terms of learning to deal with resilience. While none of these events themselves have been attributed to climate change, there is a growing consensus that similar events could be expected with increasing extreme weather events and climatic changes.

What could the potential be for community energy in the UK? A panel this week put together by think tank ResPublica says it could be as much as 3.5MW – that is almost the same as all the power generated at the Drax power station in Selby which powers over 3 million homes.

Growth in oil extraction from shale rock will mean the US could be completely independent of imported oil by 2030, said former boss of BP Lord Browne. He also said the amount of shale gas in theUSwas “effectively infinite.”

A newly released iPhone app for business travellers could soon be used to help work out carbon emissions from business trips. The Mileage Tracker app allows users to track their journey from door-to-door using GPS and car manufacturer Audi – who are behind the product – say the exact route can be tracked, regardless of diversions making the calculation much more accurate.

In a study which calculates a country’s efforts to reduce energy use in industry, transport and building as well as overall policies, the UK has ranked most energy efficient of the world’s largest economies.

A EurActiv investigation has found that at least one of the coal plants for which Poland is requesting €7 billion of free carbon allowances under the EU Emissions Trading System (ETS)’s little-known ‘10c derogation’ does not exist. Under EU rules, exemptions from the ETS until 2020 can only be granted to power plants if their investment process was “physically initiated” before 31 December 2008, and if their greenhouse gas permits were issued before 30 June 2011.

A new report finds hundreds of Australia’s inland towns could be wiped out by 2050 because of climate change. Studying 1,600 bush towns it found the ones with low education rates were least likely to make the decisions needed to adapt to changes and that there continue to be resistance in some towns where there was lingering scepticism on climate change.

Deforestation in the Brazilian Amazon could have pushed some of the region’s rarest species to extinction, as research finds many would still disappear even if forest clearance in the area ended over night. Many species have already been claimed by clearance in the Amazon but the research warns this could be just one-fifth of those that will slowly die out as the full impact of habitat loss takes its toll.

Violations made by an Indonesian palm oil firm – which was given preliminary approval six years ago for a large plantation in a forested corner of Borneo island – will test the countries environmental enforcement. The firm which should have gone through a lengthy licensing and environmental process before clearing the forest has been accused of not waiting and destroying thousands of hectares of woodland.

Climate change impacts are likely to be some of the most significant threat to Antarctic ecosystems in the futures as it causes regional warming, sea-ice distribution changes, ocean acidification and increases in alien species, say researchers who set out to map potential risk in the area.

Climate change very slow but real.So far all cures worse than disease. Shale gas huge breakthrough for US. Half carbon of coal and oil.

Since then people have been responding to his point…

@rupertmurdoch 0.2 degrees C per decade is in fact pretty fast. Cures hard to find but we’ll have to. Sooner is better than later.

Which ‘cure’ for #climate change is harder for you to swallow? ow.ly/cbUna @rupertmurdoch #nofracking

The Greenpeace polar bear – along with protesters –  has turned up at the Shell HQ in the Hague, Netherlands to protest against Arctic drilling… 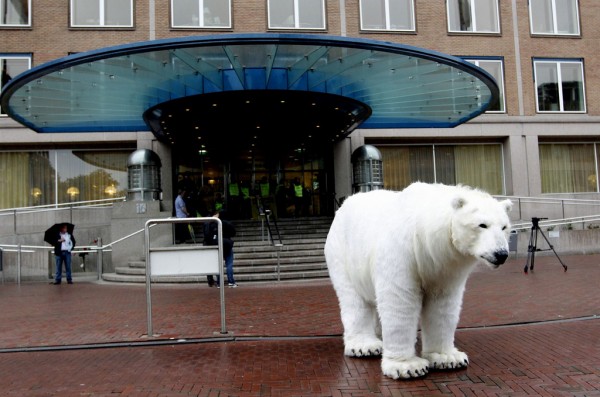