To finish up the week, a positive news story which almost wasn’t. Lucky the kitten had a narrow escape after been dumped in a bin and emptied into a recycling truck in Devon. Its crusher was stopped after two of the bin men heard the kitten’s cries.  Luckily she was unharmed and has now been adopted by the staff at Devon Contract Waste.

Anti-nuclear protests in Japan continue with police blocking subway station exits close to the Prime Minister’s office. The country switched on its first nuclear reactor last week since the Fukushima accidents saw all shut down.

China is providing Argentina with a $3bn loan for a massive wind power project. It will be the largest in Latin America.

The US Homeland Security Secretary Janet Napolitano says the government is preparing for climate change as the country sees high winds, heat waves and wildfires.

The EU’s environment ministers will meet tomorrow to discuss how they will raise the estimated $25bn needed for the bloc’s members to adapt to climate change.

A warning from Australia on how not to use a carbon tax. The boss of a bakery chain has quit after sending a memo suggesting that the nations new carbon tax could take the blame for a fresh raft of price rises.

Tongue-in-cheek column piece here from the St Louis Post-Dispatch. Another interesting insight into the mechanisations of US politics!

The US Navy is to push ahead with its $420m biofuel refinery building programme, despite plans in Washington to ban the Pentagon from investing in alternative fuels until they are price competitive with oil. The legislation is being pushed by the Republicans.

The President of the previous round of UN climate negotiations and South Africa’s international relations Minister Maite Mashabane has said there is “fundamental unfairness in the climate change problem” and described the growing frustrations of emerging economies.

A new study has drawn parallels between a previous near-collapse of coral reef systems in the Pacific and predicted changes for the next century. An amplified El Nino-South Oscillation (ENSO) effect is to blame.

The UK should pioneer a system of personal carbon trading according to British MP and chair of Parliament’s Energy and Climate Change Select Committee, Tim Yeo. He has volunteered his own constituency as a pilot scheme.

The Arctic lost more ice extent last month than during any other June on record: bit.ly/HmzGN

Germany upped solar power consumption by 50% within just a year – amazing achievement for country without much sun! bit.ly/Ncfhr5

Bertrand Piccard tweets from the cockpit of the Solar Impulse aircraft:

Just took off from Rabat, beautiful sunrise up here. Picture after landing #solarimpulse

The green economy was central to the debate at Rio+20 with little progress made. What can governments do to kick start a sustainable economic recovery? The UK’s CBI business lobby group has 10 suggestions…

Siemens has developed a test track to supply overhead electricity to trucks. The jury is out. 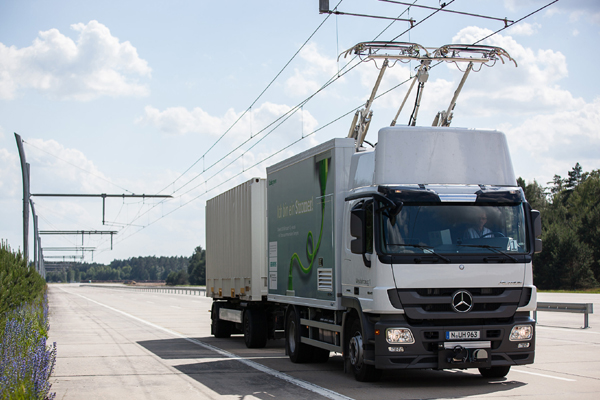 $315 bn – The amount of money the Chinese Government expects the nation’s energy efficiency sector to be worth. Staggering opportunity for wily investors.