1921 And that’s that. Brazil’s Environment Minister joins Christiana Figueres in blowing out the candles on the cake for the three Rio Conventions. Some NGOs and youth groups gave up on the process today, with a final push it might not be lights out for the Rio+20 outcome just yet. I wonder if they made a wish when they blew out those candles… 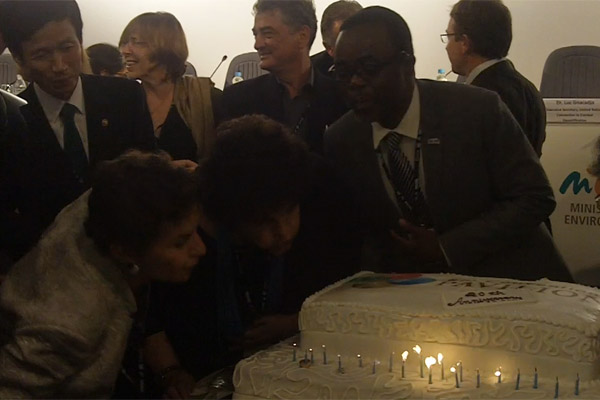 1918 Christiana Figueres says we have to make being green sexy again, that’s the way to make everyone care about it and make it the norm. “We cannot put this responsibility on the children of tomorrow.”

1911 Fahad Al Attiya, the president of the next round of climate talks hosted in Qatar, acknowledges that some people will be surprised to see a state built on oil stepping forward to host the climate change negotiations.

“The environmental pressures that forced us to be nomadic as little as 50 years ago, still exist. we are building 1800 MW of solar driven water desalination in order to tackle this national problem.”

The country will also share knowledge and technology will a coalition of other water-stressed countries.

1903 Isabel Teixeira, Brazil’s Environment Minister hailed new forest protection laws, and called for a “new kind of politics” to keep things moving forward. “if we can’t get a climate deal in 2015, what does the word priority, actually mean?” Kent grimaces at this point.

1855 Canadian Environment Minister is largely talked over while he discusses his country’s role in the history of the three conventions…Edward Norton steps in and tells those talking to “take the party outside”. Kent continues…

1813 Stay with us on the blog. We’ve got Canadian Environment Minister Peter Kent, Edward Norton, the heads of the three UN Rio Conventions plus Ministers from japan, South Korea and Brazil. If you’re in Rio, we’re in the Rio Conventions Pavilion in the Athlete’s Park.

1755 Brazil was scheduled to deliver an update on the outcome document, we’ll bring you that once we have it.

1739 The earlier sit-in has morphed into a walkout. PeaceChild, 350 and others left the conference centre and are heading to the alternative People’s Summit elsewhere in the city.

1735 Apologies for the break in the action, more WiFi hassles on site. The media room is packed out and the bloggers computer lab is equally packed.

1609 Overheard two diplomats discussing tonight’s formal dinner, apparently, there’s no seating plan so officials are jostling for position to make sure they get the most of the arrangements. In this instance, the Gambian Foreign Affairs Minister was in demand.

1605 Another Cameo to add to South African President Jacob Zuma’s.

1555 Richard Branson has just waltzed in…

1545 Former RIM CEO Jim Balsille tells High Level Panel on Sustainable Development (which Ban Ki-moon started in 2010) that business leaders can offer more to the process when they drop their affliation and come to the table as citizens. 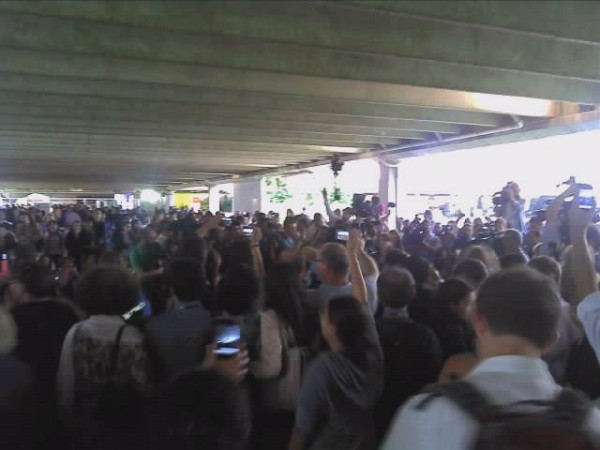 1432 Just been to the youth office. They say the sit-in is the work of a number of groups including tcktcktck and 350.org. Security is leaving them alone so far, staying well back.

People Plenary at #RioPlus20 – the people are taking over! Great to finally see action. Security around. twitter.com/alexjamesfarro… 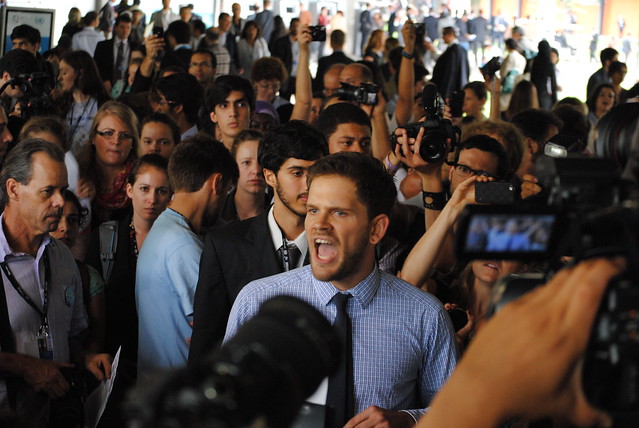 1325 @RTTC_john has just seen a sit in start. The group is already blocking walkways and awaiting the arrival of security…

1304 Raul Castro President of Cuba is at the podium in the plenary. He says military spending has doubled since Rio 1992 to $1.74 trillion. That’s a lot of money that could be better spent. He closes by saying he hopes human intelligence triumphs over “barbarity and irrationality”.

1256 The good people at CIDSE have passed on this video from the People’s March yesterday:

1241 This sums up the difference between this week and last nicely.

Change of mood at #Rioplus20 now heads of state in town – security cranks up and signs like this appear twitter.com/wwwfoecouk/sta…

1218 A journalist with 40 years of experience covering UN summits says its always a good sign when they overrun. He says given that Rio+20 effectively finished three days earlier, its the weakest outcome he’s seen in 40 years. The UN response is pretty vague. “The conference was just well organised…don’t focus on the outcome as a single outcome…”

1203 Ban Ki-moon just wandered past looking a bit fed up. I don’t think this is the situation he wanted to drop into. Lots of work left if we’re going to get a satisfactory commitment from governments.

1100 More Video from protests in Rio. Brid Brennan, Transnational Institute argues that the focus on the ‘green economy’ is nothing more than a re-branding of capitalism

1045 Some great video from around the conference on the way. First here’s Clementes representing indigeonous peoples in Minas Gerais, Brazil – this interview is in Portuguese…

1005 @rtcc_edking Delegates are streaming through the gates at Rio Centro – past a bizarre protest sculpture of a pregnant woman being crucified. As I passed an African delegate was forcefully telling the artist she found it disgusting…Todd Stern, Jonathan Pershing and Yvo de Boer have all walked past – along with a colourful outfit of Bolivians. The WWF President and small team are sitting huddled to my left discussing the text and what they can do to change it – I don’t think the ‘battle’ to have it improved (or the other way) is over. 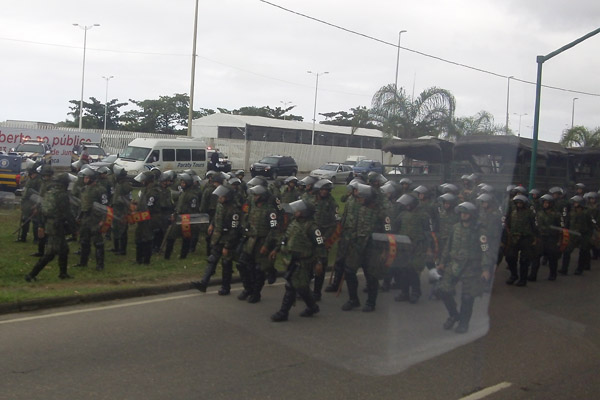 0845 Our roving camera crew have headed up to the  Christ the Redeemer staue this morning to get the low down on climate-smart Rio. More on that later.

0747 We’ll bring you the reaction to Greenpeace’s plans to ask the UN to declare the Arctic as a sanctuary, a move that could halt oil drilling in the region.

0745 Hollywood actor Ed Norton, a founder of the Crowdrise online charitable funding network, will also be commenting on the birthday of the UN Conventions on climate change, biodiversity and desertification.

0743 As part of those celebrations, a scheme to link country’s national level work on the environment with that of the Rio Conventions will be launched in partnership with GEF, World Bank, European Commission, IUCN, Government of Japan and the Government of Spain.

0734 We were woken this morning by the sound of a very noisy, very chunky army helicopter circling overhead. Outside the nearby hotels are banks of blacked out diplomat cars each with the requisite miniature flags. 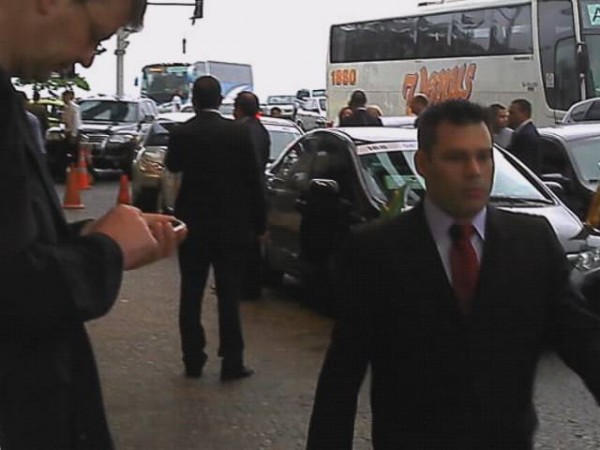