1834 Well, the world leaders have arrived in Rio. They’ve brought helicopter traffic, an awful lot of security but little in the way of hope that the dismal draft text will change drastically in the remaining two days.

1801 Iranian President Ahmadinejad did address the Rio+20 Summit today after all (see 0931): “The collapse of the current atheistic order is reaching its time,” he said predicting that resource pressures would topple capitalism.

1744 Dropped in to the World Green Summit just now. Richard Branson had an interesting suggestion for cutting shipping emissions. He proposed that cargo ships had energy efficiency ratings from A to F, like fridges. Retailers would then feel under pressure to use the cleaner fleets. 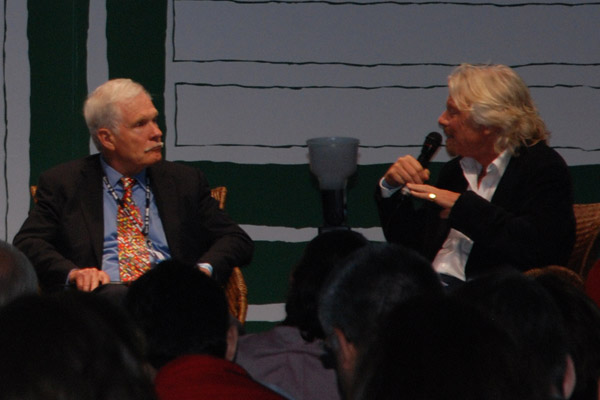 Richard Branson in conversation with Ted Turner, who has donated $1.6bn to charity including a large portion to environmental causes.

1726 Sergio Zalaya, the policy and advocacy coordinator with the UN Convention to Combat Desertification explains why he hopes to see land degradation at the heart of the Rio+20 outcome with its own Sustainable Development Goal.

1700 That’s the end of the panel, it finished with Caroline Spelman warning that sometimes politicians pass laws as a way to avoiding having to do anything about a problem.

1640 “If you think the US is blocking action now, just wait and see what happens if Obama loses the next election,” says Bob Watson.

1629 A European Commission negotiator has just described the last three days as “hell” and says she is not in any way proud of the Rio+20 document.

1626 A Girl Guide asks the panel about the role of education in prompting behavioral change. Spelman points out that the Guides now offer a badge for Biodiversity. Good to hear.

1622 Jeffrey Sachs says tradeable carbon permits are “exactly not the solution” for a price on carbon. He says a “spot price” is too short term and a longer term fixed carbon price in the form of rising a tax rising over time. He says if this lasted 20 years then it would effect decisions on big projects like power stations. “Funding through carbon taxes is easy but the US doesn’t want to do it.”

1617 “There’s an understanding gap on financing these problems. A bank manager given the choice of issuing a personal loan for a solar micro generation system or a motorcycle, would probably go for the motorcycle. It’s familiar, they understand it. We need to close that gap in understanding.” Sukhdev.

1612 “A mass movement can show the private sector that we need to change. It triggered change on the Ozone, smoking, seatbelts…but the solutions came from a combination of the right mix of legislation, technology and financing,” says Defra’s Bob Watson.

1603 “Paying farmers for protecting ecosystem services is going to have a role to play.” Watson.

1550 “The three original Rio treaties on climate change, biodiversity and desertification have not turned the needle one bit on any of these issues. They have failed because of the implementation, the treaties themselves are good.” Sachs

1548 Some great material coming out of this panel, they’re having to bring in extra chairs to cope with the demand for seats!

1544 Sachs: “US politicians afraid to write legislation on de-carbonising economy as it will become hostage to short-term political interests. We’ve wasted 20 years since the last Rio summit. Lets hope we have no shortcuts and no phony solutions at Rio+20.”

1540 “Organic farming feels great but its not the solution. If you seek out the people not using fertilizers, what you’ll find are some of the lowest yields on the planet, and people starving in droves,” says Sachs noting that the environmental consequences of them must be weighed against the food security crisis.

1528 Bob Watson, chief scientist at the UK Department of Environment, Food and Rural Affairs (Defra): “It’s clear that we need to mitigate and adapt to climate change. That means we need to understand the economic impact of both. It’s not a choice of adaptation, mitigation or development individually, they’re interconnected.”

1520 “Nature’s benefits are especially vital to the poor,” says Pavan Sukhdev. “Nature is not just a luxury for the rich, it is a necessity for the poor.”

1514 Caroline Spelman: “The good thing about having a draft agreement settled at this early stage is that we can move from talking shop to working shop, and focus on getting these things going on the ground.” 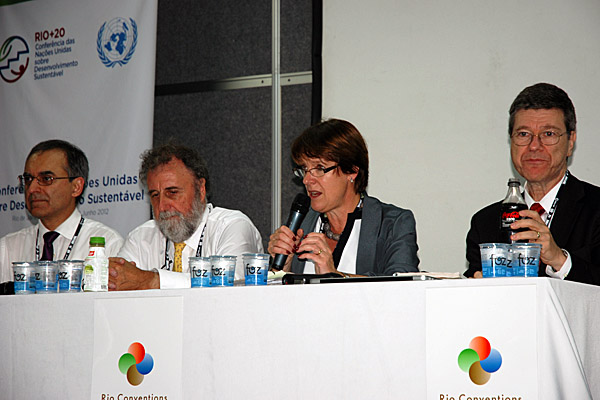 Read this Rio watchers! Just out from colleagues down there: Our analysis of the #Rioplus20 final draft text bit.ly/Kzjy8V. — Andy Atkins (@Andy2Atkins) June 20, 2012

1450 Just waiting for UK Environment Minister Caroline Spelman to arrive at a press conference next to the Rio Conventions Pavilion. There’s murmurings that the UK delegation will be pushing hard to strengthen the existing text. Here’s their opening statement from Deputy PM Nick Clegg in The Guardian.

1440 President Hollande of France has arrived. One of many big names occupying the constant stream of helicopters overhead no doubt…

1310 UK Deputy PM Nick Clegg was heckled during a speech on natural capital. The UK will force all top businesses at the London Stock Exchange to declare their Greenhouse Gas inventories annually. We’ve got a video of the interruption and the announcement.

1153 Over the road at the Rio Conventions Pavilion, gender day is under way. UNFCCC boss Christiana Figueres, UNCCD chief Luc Gnacadja and former Chile President Michelle Bachelet are currently discussing HOW gender can be better included in the Rio Text and what the Rio Conventions can do to embed gender in their talks… 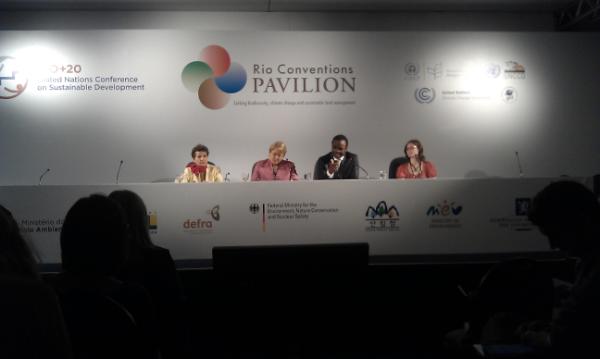 1143 The first session got underway around an hour ago. So far the NGOs have rejected the draft agreement and asked to be removed from it. A big blow for the host nation, which pieced together the compromise document.

Thank god someone stood up & said it. NGOs reject the text & ask to be removed from the text. Well done Wael from CAN! #Rioplus20 — Alex Farrow (@alexjamesfarrow) June 20, 2012 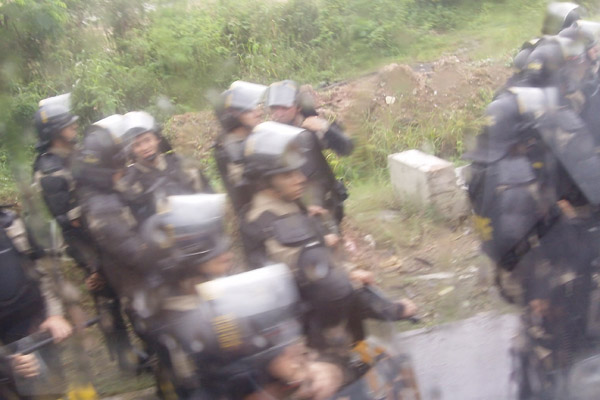 Security has been ratcheted up, predictably, as senior politicians arrive.

0742 Or maybe the public’s participation should drive things forward…

0736 So where might the much-needed leadership come from? The UK’s Deputy Prime Minister has staked his claim.

0734 Dissatisfaction with the draft text was widespread but its unclear how much or how little, leaders will be willing to change. yesterday Greenpeace called for waves of civil disobedience in order to prompt action from politicians. It remains to be seen whether either event will happen.

0732 The heads of state and ministerial level talks kick-off this morning. They’ll be discussing the draft agreement that was finally signed-off yesterday. It also means tightened security and increased mainstream media attention.