2041 This might be the best suggestion of Rio+20 so far courtesy of the UN climate agency’s chief, Christiana Figueres.

@CFigueres proposes negotiators bring their kids to these mtgs, so they have to take decisions in front of them. Big applause! #Rioplus20

1738 There might be less of an activist presence here in Rio so far, but the diehards are doing their bit! Credit where credit is due.

1655 The results of the Rio+20 “Vote for the Future You Want” poll are in. The survey asked participants to select proposals that they supported in a number of sectors from energy and poverty alleviation to climate change to ocean protection and climate change. The most supported proposal was the elimination of fossil fuel subsidies. Restoring degraded lands was second and securing water supplies third.

1628 Just received the below email saying that the Brazilian Army will limit access to Rio+20 to delegates only. what does that mean for civil society? Are they now limited to actions by accredited staff? 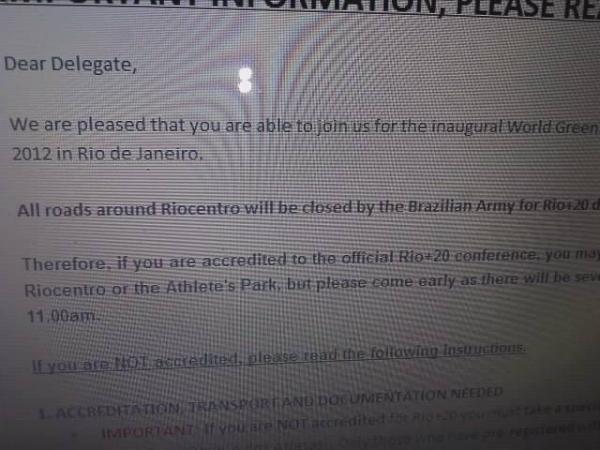 1614 Bit of a cameo performance to be honest. He chatted with some green business award winners that will receive their prizes later today and pressed the Screw Business as Usual campaign.

1600 Richard Branson on stage next at Rio+Social.

1526  Gunilla Carlsson, Sweden’s Minister for International Development Cooperation: “We have a young global population. We need to lay a platform of sustainable, inclusive growth to support them.”

1514 This is becoming incredibly surreal. The King and Queen of Sweden just arrived.

1459 Yunus on Rio+20: “It’s an opportunity to come together, there’s no reason why it should be an endangered planet. Technology and social media has made this the most powerful young generation ever.”

1454 More from Yunus: “Money making can be an addiction. but it can only be a means not an end. I saw people borrowing money from loan sharks and it was making them unhappy, so i started lending them money myself instead. I see social problems, and I create a business to solve it.” 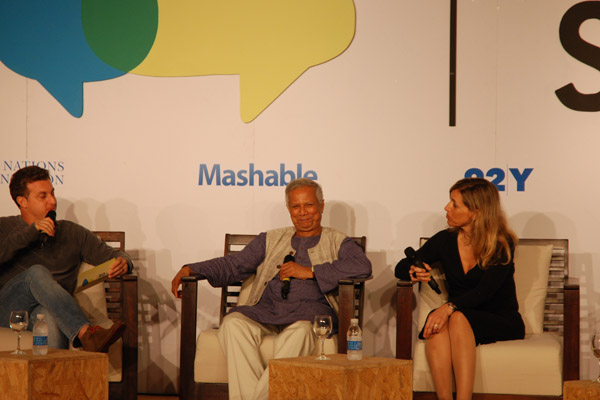 1435 Mohammad Yunus, Nobel Peace Price winner and  founder of the Grameen Bank, the bank for the poor, on social business: “The goal is not profit. The profit is reinvested in the projects.”

1418 Kate James from the Bill and Melinda Gates Foundation: “Global development is a huge communications challenge.”

1413 Back to Rio+Social, Ericsson CEO Hans Vestberg is discussing the role technology can play in taking the edge off refugee crises but reconnecting separated families.

“They [negotiators] should be embarrassed at their inability to find common ground on such a crucial issue.”

1345 The Guardian has a copy of the draft text.

1318 The draft outcome has been adopted at the main plenary in Rio. I’ll let twitter tell you what kind of reception it got…

This is Rio Minus 20 which Fails on equity, fails on ecology,Fails on economy #rio+20 #earthsummit text longest suicide note in history

#Rioplus20 Unbelievable! They approved the weak text first thing in the plenary! No objections! SD took many steps back.

1312 Iranian President Mahmoud Ahmadinejad, currently on his way to Bolivia, has said he’ll ensure Rio+20 is in all nation’s interests and won’t act solely in the interests of capitalism.

1302 Away from Rio+Social, Ed King asks if technology, including the overhead projector, is to blame for faltering UN summit processes. Langston Goree is Director of International Institute of Sustainable Development Reporting Services has more…

1250 Ted Turner: “Philanthropy is on the rise. Some of the people that move in my circle are realising they can’t buy happiness.”

Turner started the UN Foundation with a $1bn donation of his own.

1244 Ted Turner: “The UN is more relevant than ever before. Our problems are more complex than ever. They are too big for one nation so we need to work together to tackle them.”

1242 Ted Turner on keeping media attention: “We have to keep the issues in front of people. Perhaps some peaceful demonstrations are required.”

1230 Really good point on how social media reporting can shame face governments into action. Anthony Lake uses an example of infrastructure work in the favelas.

[email protected]unicef can not have sutainable development if u r not investing in youth, social media will give youth a voice to fix injustices

1211 She gets the first “whoop” from the audience at the end of her message on gender equality and the role of education in boosting prosperity and health in the long-term. Speech was peppered with some eye-watering statistics.

1204 Now a video message at Rio+Social from Queen Rania of Jordan: “We need the emergence of the She-conomy. Women invest

1159 Maura O’Neill,Chief Innovation Officer, United States Agency for International Development (USAID): “Hilary Clinton is dedicated to development issues from her head to the very tips of her toes.”

1149 Leonardo Tristão, Business Director, Facebook Latin America: “Facebook creates a means for people to mobilise. When people have the power to create a voice for their movement, it’s very powerful.”

1119 Helen Clark: “We’re in peril economically, environmentally and socially. I hope the Rio+20 outcome will inspire people to go home, do more, and do better.” 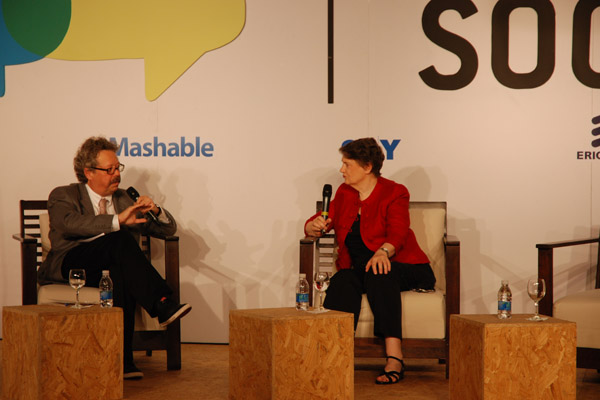 1109 And now she’s joined from Paris via the web by UNDP Goodwill Ambassador Ronaldo, “a Brazilian national treasure” and according to Helen Clark a “a UNDP treasure too. 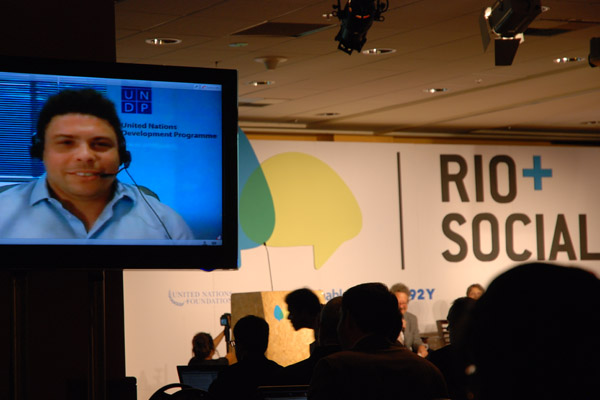 1106 Helen Clark of the UN Development Programme has joined the stage: “ICT can connect people in ways not possible before…health, education, disaster relief”

1041 Language on fossil fuel subsidies is still vague but an improvement none the less.

1040 Information is dribbling in on the revisions made to Brazil’s compromise document at Rio+20. The BBC says the concept of ‘common but differentiated responsibilities’, which protects poorer nations from expensive promises they can’t keep, is back in. The US was blocking previously.

1010 RTCC_john After another epic journey, I’ve arrived at Rio+Social, just in time to see Ed Norton walking out. Something I said?

0932 Enjoying the Rio traffic on the way to Rio+Social…you can just make out Christ the Redeemer in the distance. 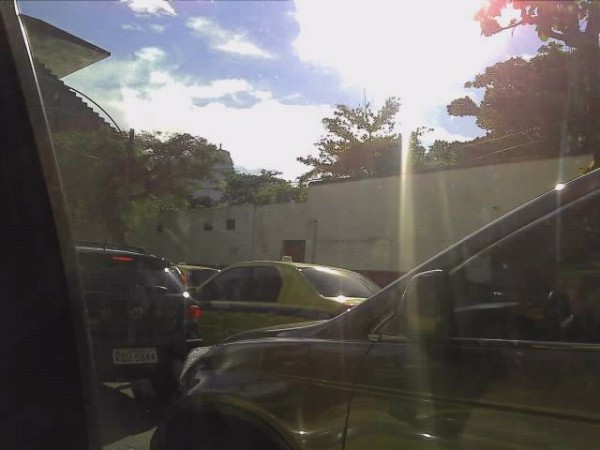 0832 ActionAid has sent us their take on the draft document, which they say was agreed in the early hours of last night. Here’s their response:

“Nothing in the final document goes beyond rhetoric, nor does it provide the resources needed for the one billion people that live in hunger. Many of the right elements were on the table to ensure the right to food for everyone, but they were either diluted or taken out by governments”, said, Elisa Hugueney, policy analyst of ActionAid Brazil

“Ambition got lost as negotiations went into overtime. Will leaders take the penalty shots and score a goal for sustainable development by committing to finance the women small holder farmers that are feeding the majority of the world?,” said Roberto Sensi, policy analyst of ActionAid Italy.

“The announcement of the SDGs could have been the crown jewel of the summit, but negotiators failed to go beyond disagreements on process and finance. Heads of States must now find innovative finance resources now, such as a small tax on financial transactions, to loosen up global deadlock on this document”, said Kirsten Sorensen, policy analyst of ActionAid Denmark.

0805 We’ll be at Rio+Social today as well and in good company too. Richard Branson, Ronaldo (the old one), Ted Turner and Linkin Park are on the eclectic bill.

0753 Today at the Rio Pavilion we’ll be asking how exactly are we going to pay for all the things we want to see in the afore mentioned draft agreement. Expect the fossil fuel subsidy topic, the ‘Robin Hood’ tax on financial transactions and the more traditional development banks to feature heavily.

0748 The final day for negotiators to complete the draft agreement is here. Some NGOs have expressed disappointment about the number of closed doors and lack of transparency of the talks. Practically all are disappointed with the content of the draft as it stands. We share anything we find out as soon as we have it.