1848 We expect, and hope, that the coming days will see more such activity from the NGOs, charities and campaigners. Perhaps they can help focus the minds of the ministers and heads of states as they begin to arrive. More tomorrow. Night from Rio.

1847 Some really interesting ideas from business day. The most vocal idea at the Summit in general was undoubtedly the fossil fuel subsidy campaign which marked the first significant intervention from civil society so far. 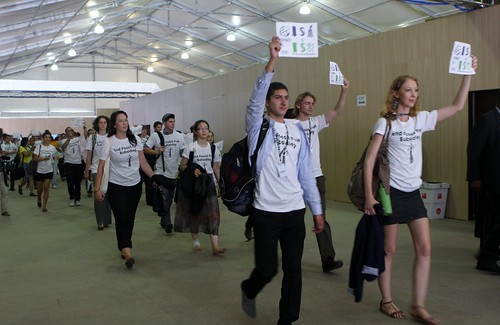 1811 Femi Jemirin, Nigerian Institute of Transport Technology talks to Pavilion TV about the work that is being done by the Nigerian government to promote sustainable transport.

1720 Great chat with the CEO of Suzlon Brazil. In Brazil, wind has had price parity with fossil fuels for a while. In fact, only large-scale hydropower is a cheaper source of electricity.

1646 Here, Daniel talks to Agnaldo Luiz a resident of the favela about life in a Brazilian favela and some of the innovative ways the communities are working to make their lifestyles more sustainable. (In Portuguese).

1645 CCTV’s Daniel Schweimler takes a trip into the Babilônia Favela to see how what the communities within the favela are doing to help make their lives more sustainable and to limit their own environmental impacts.

1624 General Electric: “We need to deploy adaptation and mitigation on climate change, biodiversity loss and desertification.” They also said their “role is to improve the efficiency of the use of natural resources.”

1621 Volvo is rolling out hybrid/diesel buses in Latin America that will cut 30% of carbon emissions from current buses. Not a bad effort.

Earlier this week, they talked us through the technology for their new bus design…

1601 Suzlon and General Electric are to head up the business panel now. Updates to follow.

The former is key to cutting global wind energy costs.

1526 PWC Sustainability again: “If you haven’t spotted that it’s ‘business un-usual because we’re reaching planetary boundaries then you won’t be in business much longer.”

1518 One delegate has hinted that a certain tar sands pipeline is reviewing its sustainability practices. He has met them and says they are looking at serious changes.

1513 “Slow change can often be mistaken for the beginning of exponential change.” The optimist’s view of green growth so far at Rio+20.

1455 Great quote from Business Day – “Some companies have such a large environmental footprint, talking sustainability is like telling a tobacco company smoking is bad for you”

The guys from PWC Sustainability say “limit on natural resources will trigger changes before the regulators do.”

1424 Apparently the Abruzzo region in Italy teaches energy efficiency and environmental awareness through its schools…How many councils can say that?

1412 New Holland Agriculture says modern farming can absolutely be sustainable. No-till farming is new on me, but sounds like a good opportunity.

1328 Here’s a selection of related tweets:

Fossil fuels subsidies have no place in today’s world . They must be phased out as the G20 pledged. #EndFossilFuelSubsidies #Rioplus20

Your support for #endfossilfuelsubsidies has vaulted us to the top trending topic in US and second place globally! ow.ly/bEA7x

1323 This on trillion dollar bill was unveiled on the beach. It represents the approximate size of global fossil fuel subsidies.

1321 Business Day breaks for lunch, lets take the opportunity to look at the #EndFossilFuelSubsidies campaign.

1311 Coca-Cola says getting the message out on sustainability issues is an area where business needs to do better.

1306 More from Niall Dunne: “The green movement has failed. Change will come from inside the system, not from agitators on the fringes.” 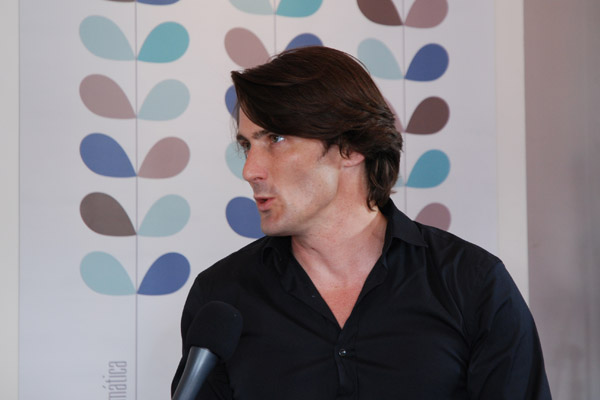 Niall Dunne giving an interview to Pavilion TV in Rio.

1258 Just spoke with BT Group’s sustainability chief Niall Dunne: “It’s both healthy and important that there are sustainability cynics. The challenge is to bring the subject out of conferences like Rio+20 and into the thoughts of everyone, from the man on the bicycle in Beijing to the one on the number seven bus in London.”

1151 Peter Bakker, President of the World Business Council on Sustainable Development: “If you add all the CSR initiatives the world combined, we would still be far short of what we need to do.”

1143 Gnacadja: “The untapped potential of degraded lands is a huge investment opportunity. There is no alternative if we are to meet the target of producing 50% more food by 2030, but to restore lands that have the potential for agriculture.” 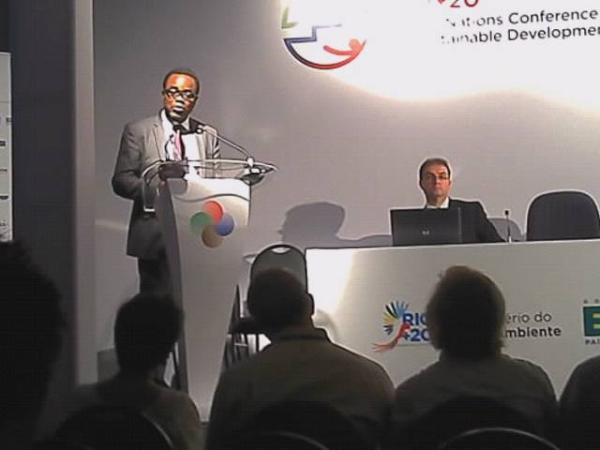 1138 “Businesses need to bring the full force of innovation to the battle. Low carbon needs to be the norm, not the exception,” she adds.

1134 UNFCCC Executive Secretary Christiana Figueres at the Rio Conventions Pavilion: “Business needs to be part of the solution.”

0724 Former UNFCCC Executive Secretary, Michael Zammit Cutajar has written a piece for RTCC on why Rio+20 is just a small step forward from the 1972 UN Conference on the Human Environment in Stockholm, pictured below.

0720 There’ll also be some reporting from around Rio, beyond the walls of the summit, courtesy of Daniel Schweimler. Here’s the first of those reports.

0718 Business day dominates at the Rio Conventions Pavilion with sustainability gurus from BT, Volvo, Coca-Cola, Airbus, Suzlon, General Electric and more dropping by. We’ll try to grab some words of wisdom from as many as possible.

0711 Morning all. Week 2 kicks off in Rio against the back drop of the #EndFossilFuelSubsidies twitter storm. The issue will be under the spotlight among NGOs today.