1812 The text is out. That’s the good news. The bad news is only national delegations have access, there’s no printed copies which rules out anyone finding the text abandoned on a coffee table. It will leak eventually, but we may have to wait a little longer.

1702 The search is on in the Rio Centro complex for a copy of the new draft outcome that Brazil has proposed.

Consolidated #rioplus20 text — Brazilians asking 4 discipline — no new brackets, no more rearranging & all to take resp 4 getting it done.

No sign of a leaked copy as of yet…

Everyone still playing hunt the text here at the @EarthSummit2012. We do not advise you try this at home ladies and gentlemen #RioPlus20

1656 Charles K.A. Aboagye from the Perfect Example Environmental Foundation explains the work of his organisation in educating children in Ghana about environmental problems through the planting of trees.

The new body, a collaboration between raft of existing organisations, will work on science, policy and communications.

1608 More from Turley: “The oceans are buffering climate change but at a cost – acidification.”

1606 Carol Turley of Plymouth Marine Laboratory: “Plankton is responsible for 50% of the planet’s [ecological] productivity,” she says adding that politicians give ocean’s far too little attention in the negotiations.

1602 Back to Ocean’s week now, how will climate change affect the oceans? Seychelle’s Ambassador Ronald Jumeau: “There are problems facing the oceans that only cutting emissions of greenhouse gases can solve.”

1600 No news yet on that compromise document from Brazil…will bring you the latest as soon as we have it.

This is what Brazilian government said two days ago on compromise: “We’re interested in a final outcome that is strong, not merely a compromise between positions.” – Ambassador Figueiredo.

A compromise is clearly no-one’s preference.

1512 Michael Vahrenkamp, STEAG Energy Services do Brasil talks to Pavilion TV about the importance of making good policies for business when it comes to sustainable development and the green economy.

1427 Didier Dogley, Special Advisor, Government of Seychelles, Ministry of Environment and Energy warns that not enough focus is being placed on adaptation.

Small islands such as the Seychelles are already facing major issues from climate change, and adaptation will be the only way to limit this, but a lot of work still needs to be done to recognised what projects will work where and when.

1335 Here’s the latest from the talks at Rio+20, the host nation could be about to play a major role…

Brazil expected to present new compromise text for #rioplus20 at 3 pm. Am I a hopeless optimist to expect major progress?

1234 More from Gustavsson: “The current patchwork of management and mechanisms has failed to protect the oceans. There is no legal tool to protect the high seas. Less than 1% of oceans beyond national jurisdiction are protected.”

1230 Lasse Gustavsson, Executive Director, Conservation, WWF-International: “Ocean management should be based on what the seas can actually sustain.”

1136 Ana Paula Leite Prates of the Brazilian Environment Ministry: “We’re making progress on increasing the number of protected areas. It is time, at Rio+20, to look at protecting the high seas, areas that are beyond national jurisdiction.”

1123 Oceans Day event is packed out. It’s an important and popular topic. 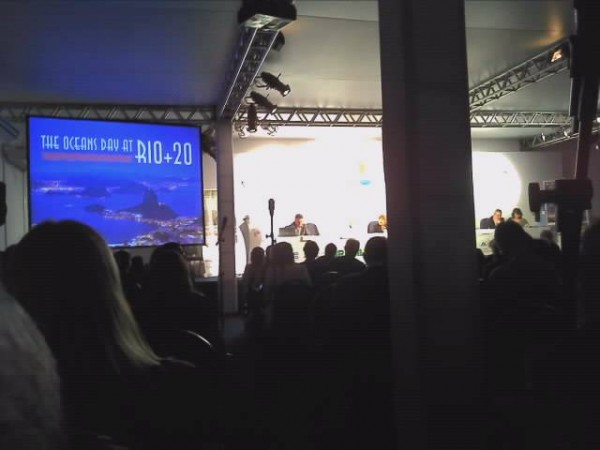 1107 Gustavo Fonseca, head of the division of natural resources at the Global Environment Facility (GEF) says there are some reasons to be cheerful will hundreds of millions of dollars of funding coming online.

1103 Oceans Day: Karl Falkenberg, Director General, Environment at the European Commission says “Oceans are an area where there is less dispute. I’m fairly optimistic that the outcome at Rio+20 for oceans will be positive.”

“Most of the ocean’s problems begin on land. Rio+20  is the opportunity to start looking at making progress on ocean protection.”

1043 Last night’s talks also failed to agree on Sustainable Development Goals. Most are in favour but there remains questions about whether they should be voluntary. Developing countries also looking to ensure they don’t have to take on commitments they can’t afford.

Negotiations for a process to define SDGs are going on, Brazil will have a relevant role to promote them #FairIdeas #Rioplus20

0826 Jaime Webbe, Consultant at the UNCBD offers us a warning that the ecosystems we expect to help protect us from climate change, will be impacted by the very thing they are supposed to help us adapt to.

0822 Protests have been small and fairly muted so far in Rio. This gentleman, protesting against racism, has been an ever-present. 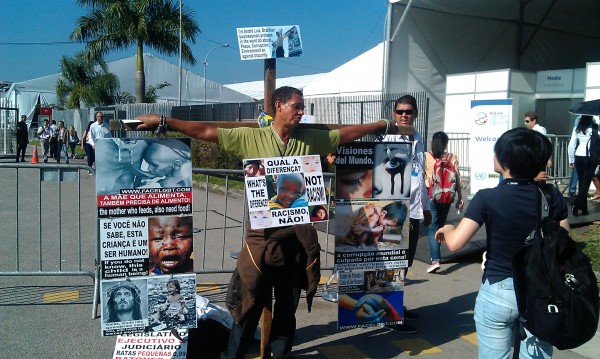 0812 If you are wondering why the Oceans are of such importance to the Rio process, here’s a reminder published just ahead of the summit.

0800 Morning all. Negotiators finished at 1216 last night with 116 paragraphs of the Rio+20 document  finalised and 199 still to be settled. Work, albeit informally, will recommence at noon today. Disputes centre on a number of issues, chiefly finance and CBDR, an argument familiar to those who follow the UN climate talks. We’ll update you with the latest as soon as we get it.