1800 That’s all from the RTCC team here in Rio on day 1 at the UN Summit on Sustainable Development. We’ve had German and Italian negotiators staking out the position of the EU at the talks, more calls for private sector involvement and a warning that we should not expect too much from Rio+20. Plus a helicopter visit from Brazilian President Dilma. Internet permitting we hope to bring you a fuller service tomorrow.

-Don’t expect too much from Rio+20; this is a time to talk and discuss, not for a groundbreaking treaty
-In 1992 Developing countries needed help. The world has changed – everyone must step up to the plate
-In a similar vein, Common but Differentiated Responsibility needs to be looked at again
-A decision to cut Fossil Fuel Subsidies will not be made here, but it is inevitable and should be made in the future

1641 @rtcc_john: Quite a view from the 9th floor of the ICC’s Rio office. Solar panels in the foreground are on the roof of the military base. Oil tankers and drilling rigs meandering in the background. Past and future energy on show. I’d suggest the next big business challenge for Brazil should be widening access to the internet! Especially for visiting journalists! 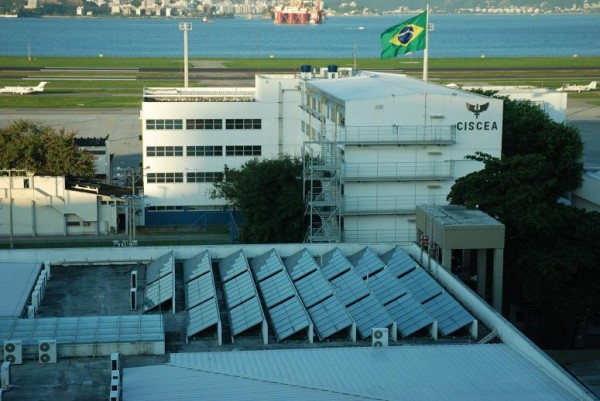 1638 @rtcc_john: Collaboration is the word of the day at the International Chamber of Commerce (ICC) meeting in Rio. The message is share ideas, learn where to make savings and prove that sustainability is an investment not a cost.

1630 Goree follows this up with an attack on technology – ‘leadership has been undermined by technology’. Not any old technology – but the overhead projector. He argues that when a text is being negotiated it appears immediately on a screen, so we lose the traditional responsibility of chairs to take control…instead it becomes a free for all as everyone can see changes as they happen – losing the space for discussion.

1627 Intriguing point by Director of IISD James Goree at Rio Pavilion launch: ‘What we are seeing (in events like this) is the deterioration of the interior and the proliferation of the exterior’ – referring to the expansion of side events at a time when international talks are becoming more and more stuck in the mud.

1550 @rtcc_edking As you may realise we’re having some teething troubles here. An internet connection is being elusive. And we’ve lost a reporter in Rio. So bear with us….it will get better. I’ve just spoken to the former German Ambassador to Brazil. Interesting on why we can’t expect many leaders to be here, given the current financial crisis. ‘How can you convince voters that climate change is more important than the Euro’ – or something similar. And it’s hard to argue against that – given the short-term mindset of most politicians.

1545 @rtcc_edking At the opening of the Rio Conventions Pavilion – Director of IISD Langston James Goree VI explains why accurate and trustworthy reporting in environmental politics and UN summits is vital (hear hear!) 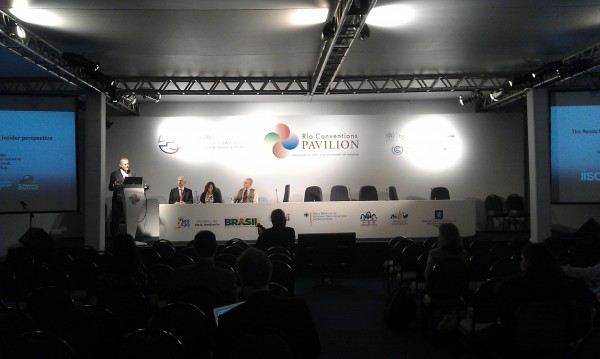 1535 @rtcc_edking We’ve lost John somewhere in Rio – if anyone sees a very white Scotsman walking the streets let us know! President Dilma has now left – hopefully she won’t be the only head of state heading this way.

1300 @rtcc_john On way to hear Volkswagon, Siemens and Deutsche Bank deliver their best ideas for green growth with the International Chamber of Commerce.

1000 @rtcc_john More congestion this morning, all the way to the site of the summit. Security has doubled since yesterday with Brazil’s President Dilma due later. A makeshift helipad has been set-up in the grounds with a big ‘H’-branded canvas mat and a ring of orange lights guiding the way.

0800 For us now it’s time to hit the road to RioCentro. Brazilian President Dilma is expected at 11am this morning. We’ll be asking her what she expects from the conference – and how disappointed she is so few world leaders have said they will attend.

But for now it’s the taxi driver who has to deal with our questions. The traffic here has to be seen to be believed. Even when the signals are green there is little movement. Appropriate perhaps for this summit – proof on our doorstep of how badly planning can go wrong…? I’ll let you decide – here’s what our journey last night looked like. 2 hours to go 40 km! 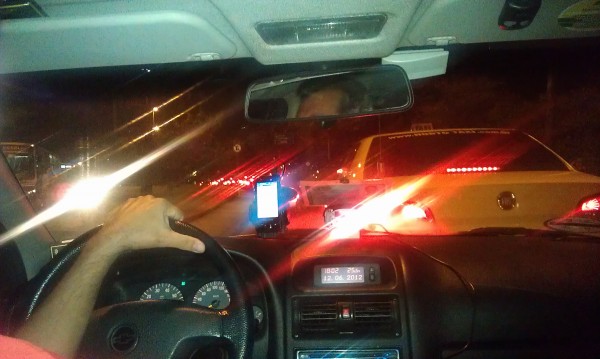 0755 John Parnell spent yesterday at the Favela Rocinha in the centre of Rio yesterday – a once crime ridden area that is under transformation by local residents. They’ve made amazing efforts to ‘green’ the area, planting roof-top gardens, growing their own food and taking kids out of the hands of drug traffickers. He’s typing now and will have that for you in the next few hours. 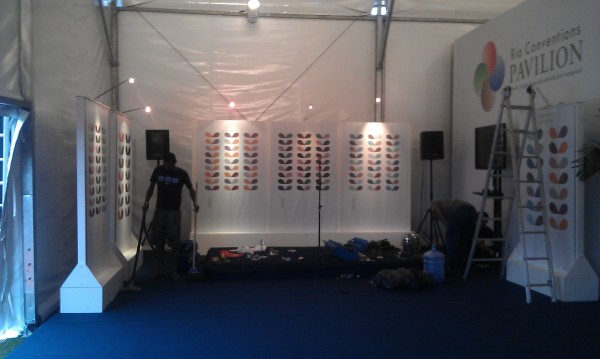 We’ll be speaking to some fascinating leaders from the worlds of business, diplomacy, politics and civil society here – you can see all the action unfold on the Climate Change TV page.

0745 Welcome to our live coverage of the Rio+20 UN Summit for Sustainable Development. It’s a cool and cloudy morning in Rio. The soaring tree-covered mountains that nestle around this iconic city are shrouded in mist, the sea is calm – and the traffic is crazy. Welcome to Brazil!

We’re based for the next 2 weeks in the Rio Conventions Pavilion – a concept and a location that brings together three Secretariats that were born at the original Rio Earth Summit in 1992.

Over the next 10 days the United Nations Framework Convention on Climate Change (UNFCCC), the Convention on Biodiversity (CBD), and the Convention to Combat Desertification (UNCCD) will all be outlining how they see Sustainable Development  and the green economy taking shape.