Fifty days from now, the high-level segment of the Rio+20 summit will begin in the same Rio de Janiero conference centre that saw 103 world leaders gather 20 years ago.

The conference this June will include almost two weeks of events prior to the arrival of the most senior delegations.

There is no comparison between the agenda of the two events – with far larger ambition brought to the table in ’92.

Negotiators are currently reaching the end of a second two-week long round of discussions on the agenda for the summit. Establishing a green economy, sustainable energy access and food and water security are high priorities.

The so-called zero draft, the basis of the talks, has ballooned in size during these negotiations, exposing the complexity of the summit’s ambitions.

Despite this, there is scope for real progress, and it is certainly needed.

In the 50 days between now and the arrival of the VIPs at the Rio Centro, 3600 species will go extinct. Ten million acres of forests will be felled.

An estimated 4.5 billion tons of greenhouse gas emissions will be pumped into the atmosphere.

The challenge is dealing with both sets of problems in tandem.

Whatever the outcome of Rio+20, it is likely to increase the prominence of the debate linking development and environmental issues.

Over the next 50 days RTCC will examine some of these connections in more detail. We’ll look at the pledges made in 1992 and assess the progress made.

The role of business will be examined with the private sector likely to provide much of the funding and innovation needed to advance sustainable development.

We’ll also develop our own set of recommendations for the event at our Road to Rio workshop, which takes place tomorrow.

Rio+20 has adopted the tagline “The future we want”, if the event does nothing else but define what exactly that might look like, it should be considered a great success. 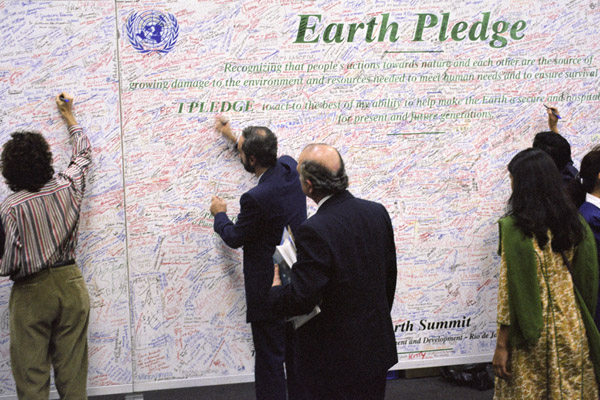