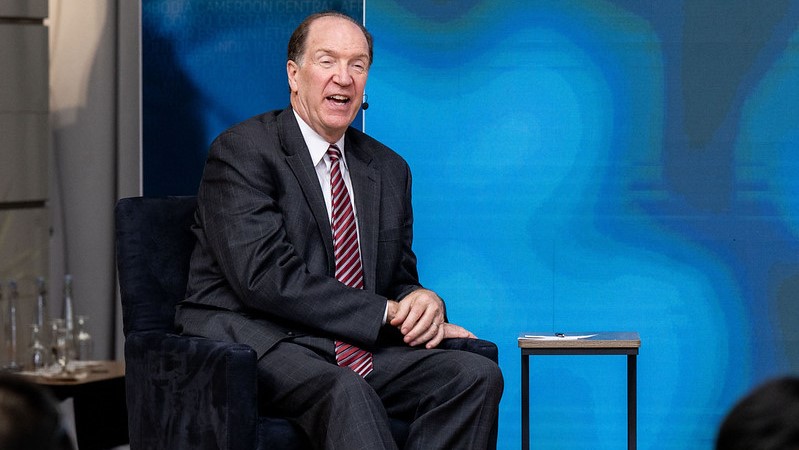 A group of 10 major economies are building momentum to scale-up climate finance for developing countries by reforming how development banks spend money, starting with the largest: the World Bank.

On Tuesday, Germany and the US handed a joint proposal for “a fundamental reform of the World Bank” to its management, during this week’s annual meetings in Washington DC.

The proposals aim to make the bank fit to address global challenges, including climate action and biodiversity conservation.

A spokesperson for the German government told Climate Home News the proposed reforms were backed by 10 countries, including all of the G7 group.

Development minister Svenja Schulze, who serves as Germany’s representative on the World Bank’s board of governors, said: “The World Bank’s current model…. is no longer appropriate in this time of global crises. Challenges and investment needs are so great that the model needs to be adjusted.”

Schulze said the reforms should include “climate lending on better terms” and “targeted budget support for governments which want to pursue policy reforms to make their economies climate neutral”.

Germany expects a response from the bank by the end of the year.

Developing countries have warned they need affordable financing options to transition to clean energy and invest in resilience without being pushed into unsustainable levels of debt. But finance isn’t flowing to those that need it most.

Last week, Janet Yellen, US secretary of the treasury, said multilateral development banks, including the World Bank, had to “evolve” to address global challenges such as climate change.

The US, the bank’s largest shareholder, and the group of reformers are calling for its management to develop “an evolution roadmap” by December, she said.

Besides from governments, the banks could support regional and sub-national entities, such as green city initiatives, adopt stronger targets and develop new instruments to mobilise private finance.

The World Bank provides loans and grants to developing countries and plays a critical role in leveraging private sector finance. Yet, it lags behind its peers in the share of funding dedicated to climate.

Analysis by The Big Shift, a coalition of NGOs, found that the World Bank provided more than $14 billion in financing for fossil fuels since the Paris Agreement was adopted. While it has committed to end financing coal as well as oil and gas extraction, its subsidiaries are still backing fossil fuel projects.

President David Malpass’ remarks doubting the scientific consensus on climate change increased scrutiny in the bank’s management. Malpass later rowed back on his comment. But civil society groups say the bank can’t be reformed without a change in leadership.

Earlier this year, a panel of experts, commissioned by the G20, presented five recommendations to maximise the banks’ financing capacity without threatening their financial integrity.

Their report found that the reforms could unleash “several hundreds of billions of dollars over the medium term”.

Franklin Steves, of think tank E3G, told Climate Home, the panel’s report “has clear momentum behind it, and it’s gathering political support among a variety of shareholders”.

“It’s incredibly encouraging that things are gradually moving the right way,” he added. “We need to snowball that effort as much as possible to get key stakeholders in the G7 and G20 behind these proposals.”

The compounding crisis of the pandemic, the war in Ukraine and the resulting food and energy crisis have caused developing nations’ debt levels to soar, eroding their fiscal space to invest in climate resilience.

According to the IMF,  more than 60% of low-income countries are in –or at high risk of—debt distress.

“This is the most acute crisis we’ve ever witnessed,” said Gayle Smith, CEO of the One campaign, which advocates to end extreme poverty and previously served as the administrator for the US Agency for International Development.

“Some countries have the tools to deal with these crisis and some don’t,” she added. Most vulnerable nations are in the latter camp.

“There needs to be an upscale in financing as a matter of urgency,” said Jean-Paul Adam, climate change director for the UN Economic Commission for Africa. “The World Bank is certainly one of the foremost institutions that should be leading the way.”

Barbados’ prime minister Mia Mottley set out some solutions in her ‘Bridgetown agenda’, a detailed proposal backed by UN officials, academics and civil society groups. One of three key pillars is to expand lending from multilateral development banks by $1trillion.

So far, no major economy has publicly endorsed the agenda.