The Category 4 hurricane, one of the most powerful to ever make landfall in the US, has destroyed homes, infrastructure and citrus farms 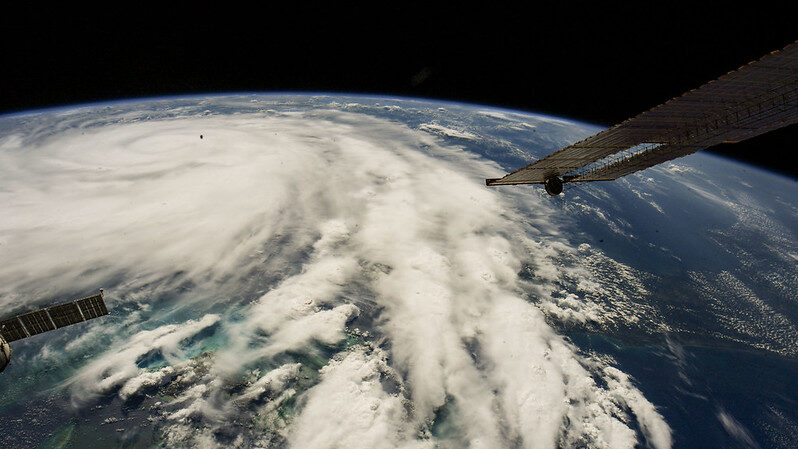 Hurricane Ian is pictured from the International Space Agency, just south of Cuba and heading to Florida. (Photo: Nasa/Flickr)

Ian brought powerful winds, heavy rainfall and storm surges to Florida and Cuba, where it knocked out the electricity grid. In Cuba, at least two people died in the storm and in Florida at least ten were killed. The storm also caused  in Puerto Rico and Dominican Republic.

The Category 4 hurricane, which is one of the most powerful to ever make landfall in Florida at 150mph, is also set to be one of the costliest storms in US history.

Chuck Watson, a disaster modeller at Enki Research, said the storm could cost the US up to $67 billion in economic damages. Besides damaging homes and infrastructure, the hurricane also ruined orange farms in the largest producing state, causing orange juice prices to surge.

Only around 30% of the damage is covered by commercial insurance, Watson told Climate Home News. 60% of Florida residents do not have flood insurance, according to a 2020 McKinsey report.

Damage to expensive properties and infrastructure on Florida’s coastline has also contributed to the enormous overall cost. “Explosive growth in coastal zones, regulatory factors, and so forth means more property with higher values in danger zones,” Watson said.

Hurricane Ian may cause wider ranging economic impacts due to “fragile capital markets, on the tail end of the housing bubble,” Watson added. “Reconstruction values may be significantly higher than market values,” he said, adding that it could cost $400,000 to rebuild a $200,000 beach house due to having to meet new flood regulations.

Emily Wilkinson, a senior researcher and specialist in global risks and resilience at ODI thinktank (formerly the Overseas Development Institute), told Climate Home News that the building regulations are struggling to keep pace with the intensifying impact of hurricanes in the region.

“Every time the building codes get updated they become out of date because of the impacts of climate change,” said Wilkinson. The number of properties damaged by Hurricane Ian suggests that “a lot of housing wasn’t built to code, but also that the building codes may not be sufficient,” she said.

There aren’t any estimates for the economic damages in Cuba, as most households and firms are not insured, Emily Morris, a research fellow at the UCL Institute of the Americas, told Climate Home News. But the damage is thought to be significant as the hurricane badly damaged agriculture and in particular Cuba’s tobacco crop, the country’s main agricultural export.

The storm would deliver a major blow to Cuba’s economy, she said. “Scarce foreign exchange will need to be diverted to recovery, and this will further set back the country’s import capacity for other goods that are vital to recovery: raw materials, spare parts and capital equipment, as well as consumer goods,” Morris added. “Inflation, which has been galloping since 2021, is likely to be even harder to bring under control.”

Just two weeks ago, Hurricane Fiona also caused heavy damages in the Caribbean and Canada, with massive blackouts and water cuts in Puerto Rico and Dominican Republic and up to $700 million in damages to Canadian infrastructure.

These disasters came shortly after leaders from developing countries issued a call for loss and damage finance at the UN General Assembly. The UN’s Secretary General, Antonio Guterres, called on developed economies to issue a windfall tax on oil and gas companies to pay for loss and damages caused by climate change.

Wilkinson said that hurricanes in the Atlantic were increasingly leading to a lot more rainfall, which was causing huge economic damages. “This has been happening progressively for the past 10 years – every year there is a record level of impact,” she said.

Scientists say climate change has intensified hurricanes like Ian. “As Hurricane Ian bears down on Florida, we already know it’s stronger and will dump a lot more rain than the same hurricane would have a hundred years ago,” Professor Katherine Hayhoe, a climate scientist at Texas Tech University, wrote on Twitter.

Despite the enormous economic damages, Wilkinson said loss of life was very limited as “both countries have very good preparedness systems.”

“Cuba, even though it’s a low income country, has extremely good forecasting capabilities and prepares very well for these events,” she said.

This article was updated with the revised death toll on 30 September 2022.