Oil and gas infrastructure has been repeatedly targeted in conflicts, making decentralised renewable energy such as solar panels more resilient 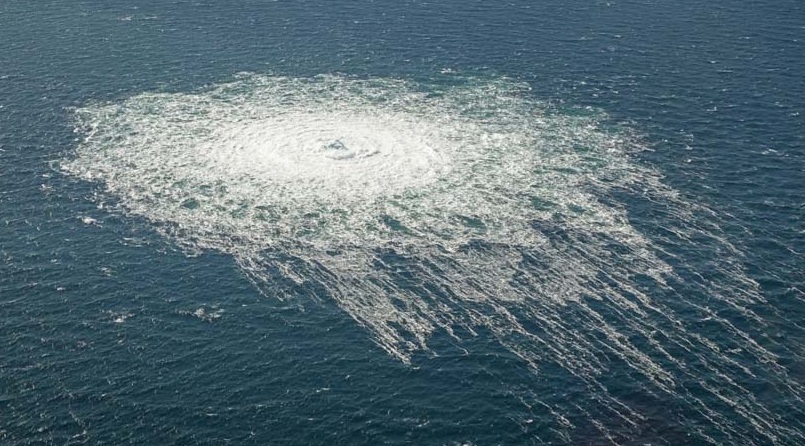 The pipeline leaks caused lots of gas to escape into the atmosphere (Photo: Danish ministry of defence)

The suspicious ruptures of two major gas pipelines connecting Russia and Europe have highlighted the vulnerability of fossil fuel infrastructure during a conflict.

On Tuesday, the Nord Stream 1 and Nord Stream 2 pipelines began to leak from three separate places at around the same time in waters near Denmark.

The leaks have led to a significant release of methane, a potent greenhouse gas which traps heat in the atmosphere. Climate scientist Zeke Hausfather said that while some methane could have been adsorbed by the oceans, “a substantial majority of it likely escaped” into the atmosphere.

“There are three leaks and therefore it is difficult to imagine that it could be accidental,” said Denmark’s prime minister Mette Frederiksen. “These are deliberate actions, not an accident,” she added.

The EU said the incidents were caused by sabotage, but stopped short of directly accusing Russia. The Kremlin has denied accusations it deliberately damaged its own pipelines.

The incident has been widely interpreted as a Russian warning of its ability and willingness to target Europe’s oil and gas infrastructure.

The leaks occurred on the same day a new pipeline from gas producer Norway to Poland came into operation.

“The events surrounding the Nord Stream 1 & 2 gas pipelines vividly show how vulnerable and threatened our critical infrastructure is,” the German armed forces tweeted.

Benjamin Pohl, head of climate diplomacy and security at the Adelphi think tank, told Climate Home News that all energy systems were vulnerable to threats like cyber attacks.

But, he said, systems that rely on fossil fuels face the “additional vulnerability related to the physical transport of large amounts of stuff”.

Wim Zwijnenburg researches conflict and climate for Dutch NGO PAX. He told Climate Home that targeting fossil fuel infrastructure meant that “with a limited effort, you can have quite a large impact”.

Both sides in the Ukrainian conflict have targeted oil infrastructure controlled by the enemy.

Oil and gas pipelines have been attacked by Islamic State in Syria, by unidentified forces in Myanmar and an oil pipeline pumping station was attacked in Yemen, during its civil war.

The disruption this caused in Yemen led to a boom in installations of rooftop solar panels during the eight-year war.

Yemen’s prime minister Maeen Abdulmalik Saeed said last year that “solar energy was one of the most important aspects that helped supply the demand”.

After the Syrian regime lost control of oil fields in the country’s east, it had to rely on oil imports from Iran. An Iranian tanker was then attacked by a suspected rocket.

More recently, the US accused Iran of sending divers on speedboats to plant limpet mines on oil tankers linked to the US and its allies.

Transmission lines, which transport both clean and dirty electricity from where it is produced to where it is consumed, are also vulnerable to attack.

To increase resilience, the Council on State Fragility, which represents many war-torn states, has recommended installing distributed renewable systems like rooftop solar panels.

In a report last year, the group said “attacking infrastructure is a common practice in conflicts and electric power systems are obvious targets” but distributed renewables “allow for a diversified energy supply, increasing resilience”.