After three decades of frustration, vulnerable countries are determined the “Glasgow dialogue” on loss and damage must deliver more than just talk 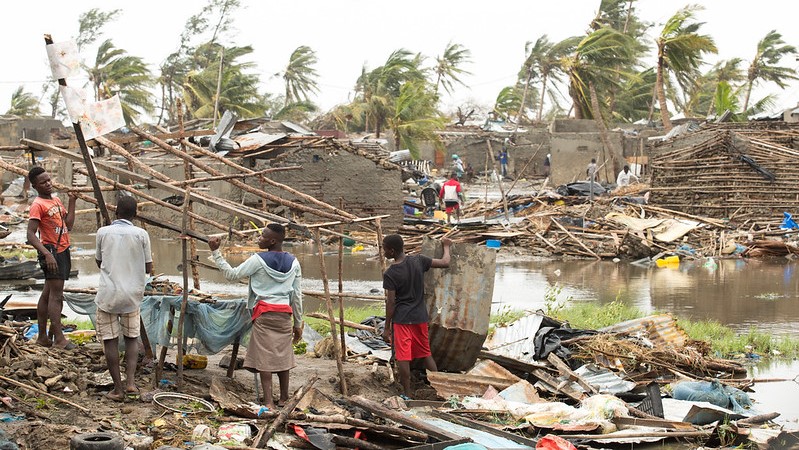 Men hold the wooden structure of a destroyed house after the passage of Cycle Idai in Mozambique in March 2019 (Photo: Denis Onyodi: IFRC/DRK/Climate Centre/Flickr)

Vulnerable island states say they cannot wait another three years for a funding mechanism to help victims of climate disasters.

Developing countries demanded the creation of a fund to respond to the losses and damages caused by increasing climate impacts during last year’s Cop26 climate talks in Glasgow, UK.

But in the face of US and EU opposition, they settled for a “dialogue”, co-chaired by the US and Singapore, which runs until June 2024 and is tasked with discussing potential funding arrangements.

At the first session of the dialogue on Tuesday, small island states said 2024 was too late for money to start flowing to communities on the frontline of climate impacts. They want to establish a finance facility at this year’s climate summit in Sharm el-Sheikh, Egypt, and work out the details along the way.

“There is no clear finance for the loss and damage that is right now undermining fundamental human rights in our region. This is essential,” Kathy Jetn̄il-Kijiner, climate envoy for the Marshall Islands, told the meeting during preparatory climate talks in Bonn, Germany.

Jetn̄il-Kijiner said no climate finance, neither humanitarian aid nor adaptation funding, “even comes close to the scale of resources required”.

Comment: Deadly heatwaves show why India needs to get serious on climate adaptation

Small island states first proposed compensation for victims of projected sea-level rise 31 years ago but their calls, joined by others, remain unanswered.

“The Glasgow Dialogue appears to be a one standalone dialogue with no clear destination,” Michai Robertson, climate negotiator of Antigua and Barbuda said on behalf of the Alliance of Small Island States (Aosis).

Denmark has been a lone voice among developed countries actively engaging on the issue. Rich nations have long sought to avoid any liability and compensation claims for their historic emissions and responsibility in causing climate change.

Instead, donor nations point to existing provision of development finance and humanitarian aid.

But research by anti-poverty charity Oxfam published on Tuesday highlighted that humanitarian aid is not keeping up with the growing toll of extreme weather.

It found that UN humanitarian appeals for extreme weather disasters, such as floods and droughts, rose by more than 800% between 2000 and 2021. Since 2017, donor nations have met 54% of these appeals on average, leaving an estimated $28-33bn shortfall. 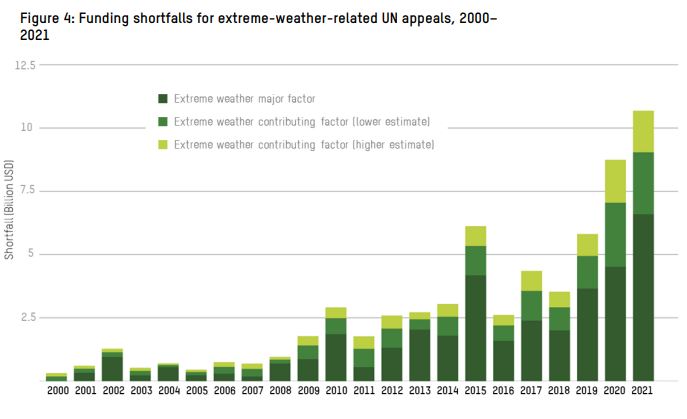 By 2030, the unavoidable economic losses incurred as a result of climate change in developing countries are projected to reach $290-580 billion. The precise figure depends on the success of efforts to curb emissions and adapt to climate impacts.

Humanitarian aid won’t stretch to meet those needs because it tends to focus on most-affected areas and often doesn’t capture small and medium-size crises, said Carty, who described the funding as “piecemeal, inadequate and often at the whim of donors”.

In fact, Oxfam estimates that over the past two decades, UN appeals only covered around 7.5% of extreme-weather-related disasters in low and middle-income countries. This only provided relief for 474 million people when closer to 3.9bn people were affected.

This “disaster begging bowl” approach is misaligned with principles of climate justice, the charity argues,  and needs to be replaced “with a fair and automatic mechanism for financial support” based on the “polluter pays” principle.

The issue of financing for victims of climate disasters “deserves more than a dialogue,” said Madeleine Diouf Sarr, of Senegal, chair of the least developed countries (LDCs) at the start of the talks.

“Countries with much greater responsibility and capabilities than ours must close the funding gap so that when the impacts of climate change hit – when houses and hospitals are washed away, when crops are destroyed, when islands sink and when whole communities are displaced – the costs don’t land on the already vulnerable households,” she said.

Harjeet Singh, senior adviser on climate impacts at the Climate Action Network (CAN) International, said the dialogue risked becoming “a talking shop” and “won’t lead to anything meaningful” unless discussions are fed into the formal outcome of the meeting.

So far, the dialogue remains outside the meeting’s formal negotiating agenda.

“If rich countries don’t allow the Glasgow dialogue on loss and damage finance to be on the formal agenda, it clearly means that they have no intention of helping people on the ground… who are suffering right now,” he said.

Jerome Ilagan, co-chair of the UN body responsible for loss and damage, promised the dialogue would go beyond “a talking shop” and work “to deliver concrete ideas and progress”.

If you’ve only loosely followed COPs, you may have heard of the need for a new funding facility to address #LossAndDamage.

But you might be pretty shocked to learn it’s not even a formal agenda item for negotiation at the UNFCCC.

Just a “Dialogue” with no mandate for outcome. pic.twitter.com/flaCZ5JAjS