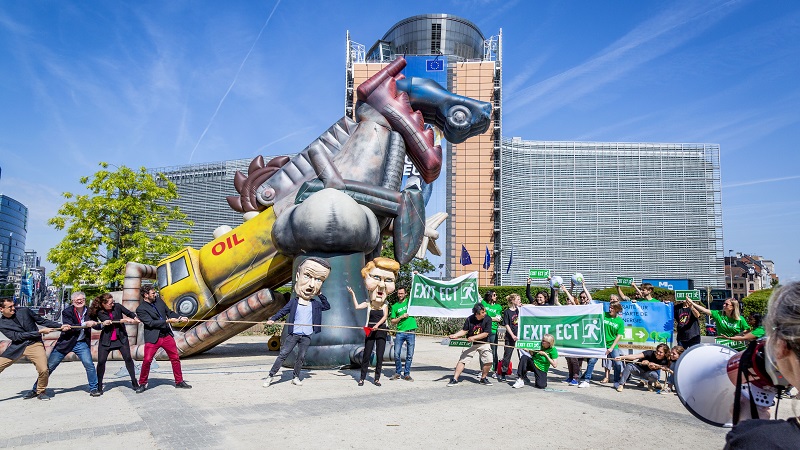 Coal, oil and gas companies have used the treaty to sue governments over the impact of climate policies. For over two years, member states – which are mostly in Europe and central Asia – have been holding “modernisation” talks. The European Commission has called for fossil fuel protections to be phased out, to allow a rapid transition to clean energy in line with climate goals.

Since the beginning of these negotiations, Japan has opposed any reforms. In an October 2019 submission, it wrote 26 times: “Japan believes that it is not necessary to amend the current ECT provisions.” A final decision is due at an Energy Charter Conference on 24 June.

The European Commission told an energy committee meeting of the European Council on 6 April, according to minutes seen by Climate Home News, that Japan “had taken steps backwards in the definition of investment and sustainable development”.

Under the treaty, states must uphold “fair and equitable treatment” of investors – or they can be sued. The Commission sought to limit the grounds for legal challenge to a “closed list”.

Japan was “surprised” at the proposal and emphasised it would not accept a closed list, the minutes said. That ambiguity would allow investors to claim any number of government interventions are unfair.

The minutes state that Azerbaijan and Japan “continue to resist the reference to workers rights” and that Japan and Turkey “did not want to accept a reference to (basic) UNCITRAL regulations on transparency”.

The European Commission reported “it was unclear why [Japan] was so difficult to convince (also in view of the small number of [Japanese] investments that would be affected”.

Japan’s fossil fuel investments in ECT countries are limited. But it has supported wide-ranging protection for investments in a number of different international forums.

In December 2021, Japan’s ambassador to the EU Yasushi Masaki told the ECT conference: “It is necessary for each member country to pursue various energy source options through the protection of energy investments, in order to enable their respective energy transitions while taking into account the fact that economic and social conditions might differ depending on the country.”

Friends of the Earth Europe campaigner Paul de Clerck said: “After five years of meetings, Japan still doesn’t want to give up the protection for fossil fuel polluters.”

In the Council committee meeting, representatives of the Netherlands, Spain and Poland “reiterated the need to think about… possible exit scenarios in a timely manner”. Spain’s representative said “it would consider an exit scenario, as it did not see how the Energy Charter Treaty could be adapted to the Paris agreement”.

Several European countries have long said that they want a coordinated exit from the ECT if these modernisation talks fail. The last round of negotiations began on Monday.

In the previous round in April, progress was “less than [the European Commission] had hoped for” and mainly focussed on “trade aspects” rather than “energy aspects” like whether fossil fuels should remain protected.

Governments have been keen to reform the treaty instead of leave it because of a “sunset clause” which means the treaty’s provisions stay in effect for 20 years after a government withdraws. Italy and Russia have both left the treaty but remain subject to its sunset clause.

Governments prefer a mass exit to an individual one because that would allow European countries to promise not to enforce claims against each other while the sunset clause runs out. Most ECT cases within the EU are from companies also based in the EU.

The chairs of the European Parliament’s environment and trade committees wrote to the Commission today calling for it to “prepare for a coordinated exit”.

The negotiation around the reviews of the Energy Charter Treaty have so far proven not to deliver meaningful changes up to the #climate crisis. With @anna_cavazzini and @berndlange we call for a coordinated exit of all EU countries from it. #ECT pic.twitter.com/PjJgpu4VSr

Campaigners have called for this too. De Clerck said: “The only sound option for the EU and member states to live up to their climate responsibilities is to withdraw from this toxic ECT.”

The UK and Switzerland have not supported the EU’s push to reform the treaty. Campaigners have accused them of trying to cash in on a potential EU exit by tempting fossil fuel firms to move their headquarters and continue to sue European governments which take climate action.

The ECT covers countries in Europe, central and east Asia and has ambitions to expand. Countries like Nigeria have expressed an interest in joining the treaty.