While the Bolsonaro administration has nominally increased its 2030 target, a baseline shift allows Brazil to emit more than under its first Paris pledge 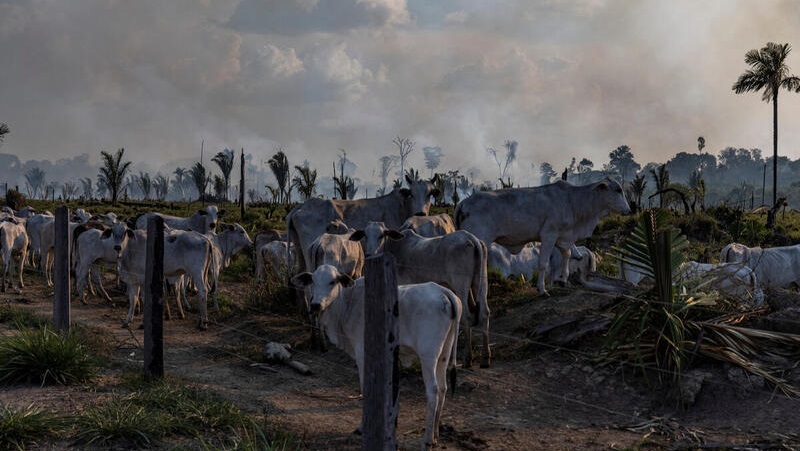 Cattle in a ranching area next to a recently deforested and burned area in the Rondônia state in Brazil (Photo: Victor Moriyama/Greenpeace )

Brazil has been accused of using a carbon accounting trick to cover for weakened ambition in its updated climate plan submitted to the UN last week.

The document describes the plan as “one of the most ambitious in the world”. But a revision to the 2005 baseline means the updated plan allows higher emissions in 2030 than Brazil’s first Paris pledge. The difference is equivalent to the annual emissions of Colombia, the Talanoa Institute calculates.

This “is against the spirit of the Paris Agreement,” Caio Borges, of Brazil’s Climate and Society Institute told Climate Home News.

Under the 2015 Paris deal and last year’s Glasgow Pact, countries are expected to progressively strengthen their climate targets.

Brazil’s environment minister Joaquim Leite announced the 50% target during Cop26 climate talks last November. A document confirming this was submitted to the UN following a visit by Cop26 president Alok Sharma at the end of March.

Brazil has been under pressure to step up its climate plan after a first update to its 2030 target in December 2020 effectively weakened the country’s ambition.

At the time, Brazil confirmed the previously indicative target of cutting emissions 43% by 2030, while inflating the emissions baseline for 2005. The higher baseline, largely due to changes in the way forest destruction was accounted for, meant that Brazil could continue to increase its emissions while still reaching its 2030 target. 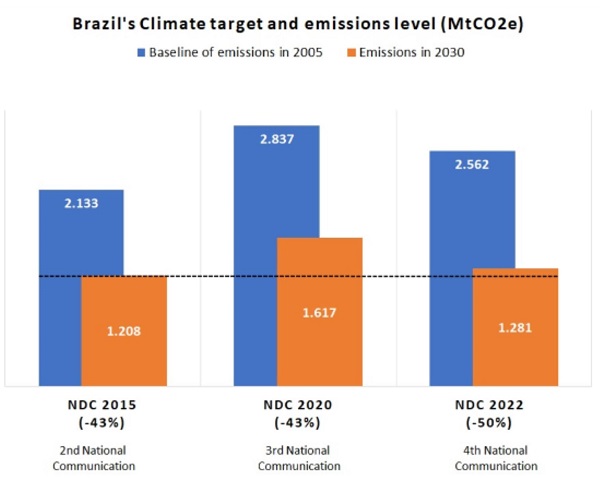 “The new target is a failed attempt by the Bolsonaro administration to fix the mess,” the Brazilian Climate Observatory, a coalition of NGOs, said in a statement.

While it increases the nominal goal to 50% of emissions cuts, the plan uses the most recent and accurate emissions inventory for 2005, which is lower than the one used in 2020 but higher than the one in 2015.

Although an improvement on the 2020 update, this would still allow Brazil’s emissions to rise beyond the goal it set itself in 2016.

“This is like having credit card debt and only paying part of the bill,” said Marcio Astrini, executive secretary of the Climate Observatory. “It’s still a step backwards, at a time when the United Nations is calling for countries to increase their ambitions.”

To match the ambition level of Brazil’s 2016 plan, taking into account the country’s latest inventory update, would require a commitment to cut emissions 49% by 2025 and 53% by 2030, according to the Talanoa Institute analysis.

Sectoral pledges made at Cop26 on cutting methane emissions and achieving zero deforestation by 2030 are not reflected in the updated plan and civil society wasn’t consulted.

The Brazilian government argues that the same methodological modification that increased the 2005 baseline could also increase the volume of emissions in 2030. But “a systematic legal interpretation of the Paris Agreement reveals that nothing in the agreement indicates that a country is allowed to move backwards in its ambition,” Borges said.

The update to Brazil’s climate plan comes as deforestation is rising and the government is planning an expansion of oil and gas drilling across the country – emboldened by international sanctions on Russia and demand for alternative sources.

“Brazil is opening new oil frontiers such as the onshore exploration in the Amazon and offshore in the river mouth,” where it could take a decade for production to start, Ilan Zugman, 350.org’s Latin America managing director, told Climate Home.

On Wednesday, the National Petroleum Agency (ANP) opened the auction of 379 oil and gas exploration areas, against opposition from local fishing communities and indigenous people.

The auction is taking place in addition to a permanent bidding process for 1,068 drilling blocks covering 462,500 square kilometers – an area 15 times as big as Belgium.