Under rules to prevent the spread of Covid, negotiators at Cop26 have been asked to keep a metre distance, meaning they need to find new ways to resolve differences 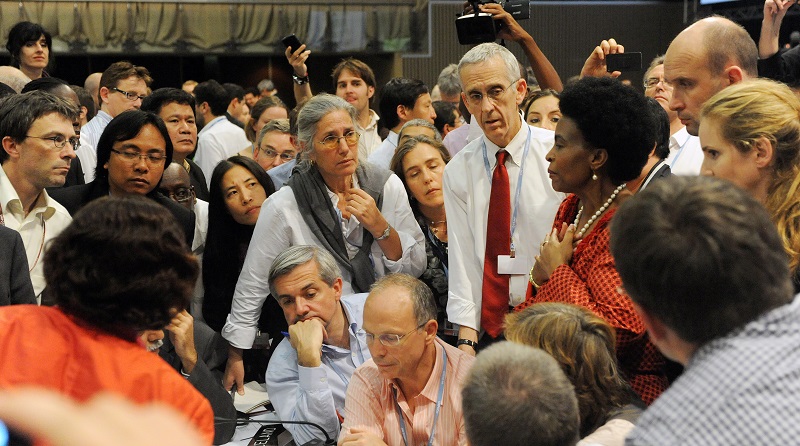 Negotiators huddle in Durban in 2011 (Photo: IISD/ENB/| Kiara Worth)

At 3am on the second day of overtime at the 2011 UN climate talks in Durban, it looked certain that the world’s governments would yet again fail to reach agreement.

Most of the world’s major emitters, including those which had previously blocked progress, had agreed to set up negotiations on what would become the Paris Agreement.

But India’s environment minister Jayanthi Natarajan remained passionately opposed, arguing that India shouldn’t have to fix a climate problem it did not cause.

“Does climate change mean you give up equity?” Natarajan asked. “I’m sorry madam chair. India will never be intimidated by threats… or any kind of pressure like this.”

Up to this point, negotiations had been conducted formally. National representatives sat behind their flags and made statements through the chair.

But, with this going nowhere and time running out, the South African foreign minister chairing the meeting took a different tack.

The EU’s climate commissioner Connie Hedegaard turned her chair around and spoke directly to Natarajan, who was right behind her.

The two women were then joined by much of the conference. Among the crowd was then Swedish environment minister Lena Ek. “It was like when you were a kid and there was a fight at the schoolyard,” she said. “Everyone circled around.”

“It was dead quiet and everyone gathered around,” she said. Brazil’s chief negotiator came up with a compromise and “suddenly [Natjarajan] said yes”.

“My eyes are tearing when I remember this moment because there was so much emotion… without this, we would have no Paris deal,” she added.

This is the most famous example of what climate negotiators call a “huddle”, where people gather in close proximity to thrash out their disagreements.

The concept is so well established in the Cop attendee bubble that veteran climate adviser Kaveh Guilanpour sells T-shirts saying “I need a huddle” and donates the funds to Unicef. 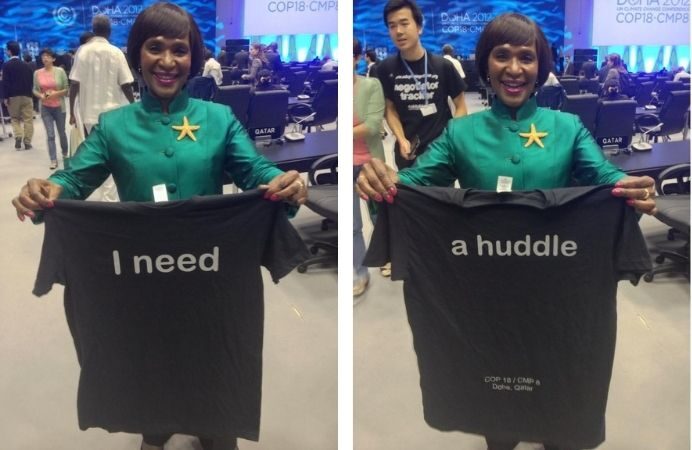 At this year’s climate talks in Glasgow, UK, things will be different. It is the first UN climate summit since the Covid-19 pandemic took hold. With an estimated 25,000 people expected to attend from around the world and high levels of Covid transmission globally, organisers are trying to avoid creating the conditions for the airborne coronavirus to spread.

The code of conduct states that attendees should be masked unless eating, drinking, “sitting to perform negotiations” or in “office spaces/meetings” and should keep one metre apart from each other.

So will coronavirus kill off the huddle? If so, would that be a bad thing?

Negotiators Climate Home News spoke to broadly agreed that huddles have been effective in reaching agreements but are not a fair way of conducting diplomacy. 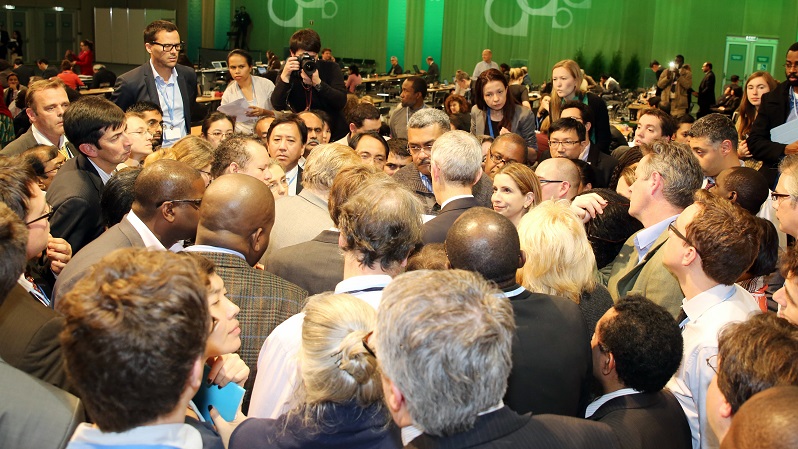 Delegates discuss loss and damage in Bangkok in 2018 (Photo: Photo by: IISD/ENB)

As the executive secretary of UN Climate Change between 2006 and 2010, Yvo De Boer oversaw several climate talks and many huddles.

He said they have been useful in speeding up talks. “If you stick to the formal meeting,” he said, “you have to give everyone on the floor their turn, including people who are not really critical to the formal issue… it takes a lot more time.”

Former British environment minister Chris Huhne, who was in the huddle at Durban, told Climate Home News:  “If a huddle works, it is because lots of people are usually trying to persuade one or two others to change position… sometimes social pressure works.”

Lidia Wojtal is a former Polish climate negotiator who now works at the Agora Energiewende think tank. She agrees that huddles are useful and save time but, she said, they are “not equitable”.

The exclusivity combined with informality means the voices heard are those that have pushed their way, or been invited, to the centre of the huddle.

This is easiest for people who are either powerful, of any gender, or of a bigger stature or feel comfortable pushing past or standing in close proximity to others, who tend to be men.

“The main challenge is to physically squeeze into the middle of the huddle to participate. I certainly don’t feel comfortable in such an environment, and maybe other women feel the same way,” Wojtal said.

Ek said that climate diplomacy as a whole is male-dominated. “There are those that force their way to the table and that is not a good way to end a negotiation.”

De Boer said that while women do take part in huddles, one “could argue that the people who can elbow their way to the front and have the loudest voice have the biggest influence” . But, he said, what comes out of the huddle has to go to the wider plenary.

He added that women from certain cultures were likely to be less comfortable in a huddle. “Many ladies from delegations in the Middle East didn’t even like you to shake their hand… so I think they’d be even less keen to be in a huddle with me,” he said. “There are also cultures where if there’s men around, women are less keen to speak out.”

That discomfort is well founded. Former Pakistani negotiator Meera Ghani has said that, as delegates huddled in Copenhagen in 2009, she “felt a hand on [her] backside”. This and other incidents of sexual harassment eventually drove Ghani out of the climate movement.

Another female climate negotiator, who asked to remain anonymous, told Climate Home News: “I’ve heard several stories like [Ghani’s] and that [being groped] has happened to me”.

She added: “Close proximity presents a danger of sexual harassment and that’s something that female negotiators have to be more conscious of than male negotiators. It adds another element of power imbalance to an already male-dominated space.”

Huddles also privilege those who speak English well. While formal discussions have live translations, huddles do not. While most career diplomats speak English, ministers sometimes don’t.

One veteran climate diplomat who did not want to be named said that in Paris in 2015, Japanese environment minister Tamayo Marukawa did not speak English and so would have been excluded from participation in any huddles. “But huddles at ministerial level are rare,” the diplomat added.

All the negotiators Climate Home News spoke to agreed that huddles would be hard to replicate online, even if that was desirable.

If the Durban climate talks had been online, the EU’s Connie Hedegaard could have emailed Jayanthi Natarajan to arrange a meeting. But setting up a meeting takes time and does not allow for others to spontaneously join the conversation.

Even before Covid, the climate process may have passed “peak huddle”. A mechanism that was critical to landing the Paris Agreement has less relevance since it entered into force. The focus has turned from drafting an international pact to putting it into practice.

The Stockholm Environment Institute’s Richard Klein is one of the authors of a report on how to embrace the potential of online technology to improve climate negotiations.

He said it all comes down to the “nothing is agreed, until everything is agreed” principle at these talks. This means that negotiators can provisionally agree on parts of a deal but these won’t come into force until the whole deal is agreed.

The idea is to keep a balance between different groups’ priorities, but it means a relatively minor aspect of negotiations, sometimes just a few words, can hold up the whole package. Huddles have been a way of resolving those deadlocks.

“Now that we have the Paris Agreement, there is no need to have that,” Klein said. “We should not continue to work in that mode… because it allows countries to hold agenda items hostage and it’s just not effective.

“There are certain agenda items that need to move forward and so will move forward at a different pace to others. If you accept that then the need for a huddle might be much less,” he said.