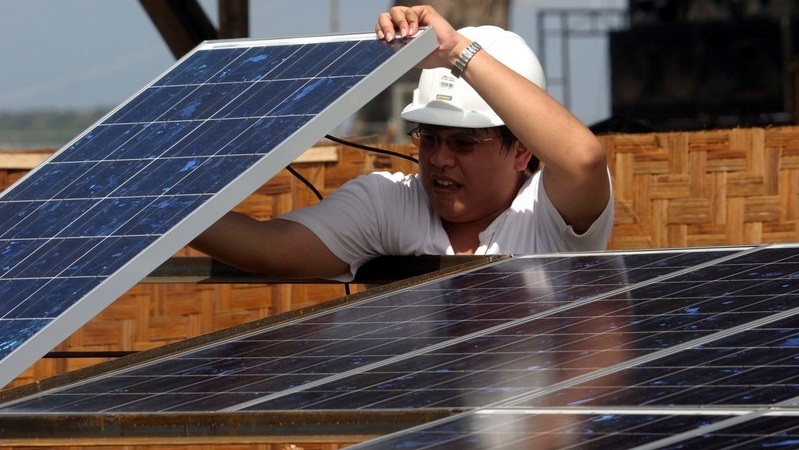 A solar panel is installed in Indonesia, one of Japan's partner countries for offsets. (Photo: Hotli Simanjuntak/Greenpeace)

The Japanese government will use use international offsets as part of a plan to cut emissions 46% between 2013 and 2030, it said in a document to the UN.

The goal, which was first announced by former prime minister Yoshihide Suga at Joe Biden’s climate summit in April, is a strengthening of Japan’s previous pledge to reduce emissions by 26%.

In a submission of its updated plan to the UN on Tuesday, the world’s third largest economy said it will “continue strenuous efforts in its challenge to meet the lofty goal of cutting its emission by 50 percent”.

Earlier this year, campaigners called on the government to turn the aspiration 50% target into a firm emission reduction goal.

To deliver on its pledge, Japan said it will make “all possible efforts” to cut emissions through energy efficiency measures, the roll out of renewable energy, and by decarbonising public sectors and local communities.

By 2030, Japan says that about 100 million tonnes of CO2 will be avoided through international carbon trading using the country's Joint Crediting Mechanism (JCM).

That means Japan will fund carbon-cutting projects in developing countries and account for the emissions reduction towards its own goal. South Korea and Switzerland have also said they planned to use carbon trading to achieve their targets.

Projects currently in development in Thailand under the JCM include green heating for a chicken slaughtering plant, floating and rooftop solar power projects and energy efficient lighting.

Campaigners have criticised the government over its plan to buy offsets abroad rather than cut its own emissions at homes.

Carbon Market Watch policy officer Gilles Dufrasne said: "Countries should reduce their own emissions and set domestic emission reductions targets that match what they can achieve at home."

He added: "Carbon markets can have a role to play in disbursing climate finance, for example through results-based payments agreements, but 'netting' emissions across countries to meet [climate plans] is a risky game that has not worked well in the past."

Lidy Nacpil, of the Philippines, is co-ordinator of the Asian Peoples' Movement on Debt and Development, which has previously participated in the JCM.

"Using offsets is avoiding responsibility and passing it on to others," she said. "The world has no more time left for this nonsense."

But Indonesian energy analyst Putra Adhiguna, of Ieefa, disagreed. He described the JCM as a transparent and "commendable initiative" which has "enabled many emission reduction projects which otherwise would not take place in the partner countries".

While "the logic of JCM to reduce emissions where the cost could be lower is fairly reasonable," it "should be considered a complementary item from what is a (much) bigger task back home in Japan," he added.

International rules for a global carbon credit market have yet to be finalised and will be up for discussion at Cop26 in Glasgow next month. Japan said it would use its experience of the JCM "to lead [these] international discussions".

Other analysts explained Japan's reliance on offsets by the fact its planned energy transition is too slow.

New Climate Institute researcher Takeshi Kuramochi said: "It is problematic that the Japanese government still expects a rather high 19% coal share in the 2030 electricity mix. Equally problematic is the 20-22% nuclear share target, which I find to be unrealistically high."

But Clean Air Task Force director Jonathan Banks questioned whether this was compatible with Japan's recent signing of the Global Methane Pledge, which calls on countries to reduce collective methane emissions 30% this decade.

The pledge, which was pushed by the US and the EU, has now been signed by more than 30 countries.

"I would hope that the targets for methane reduction would be revised to reflect that greater ambition," Banks said.