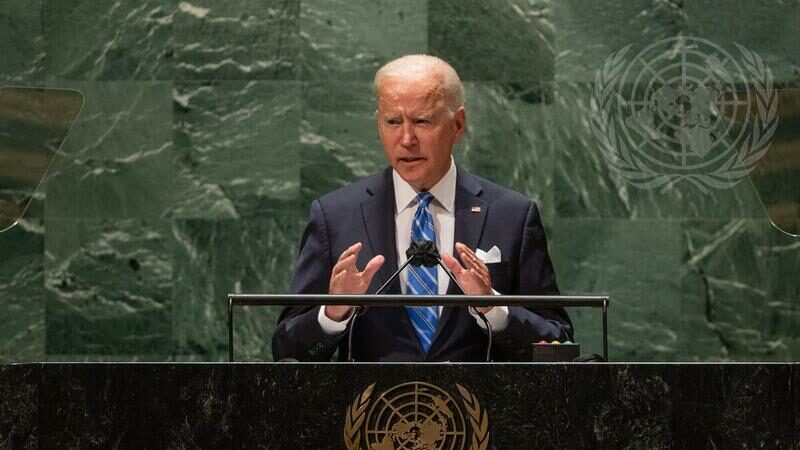 The US will double its climate finance contribution to $11.4 billion a year by 2024, president Joe Biden announced at the UN General Assembly on Tuesday.

During a speech at the UN in New York, Biden said his administration would work with Congress to double its April pledge of $5.7bn and “make the US a leader in international climate finance”.

The new pledge is a significant increase on previous US climate finance contributions and in line with some green groups’ demands, but does not single handedly close the global funding gap.

“This is a welcome, much-needed demonstration of the commitment by the United States to global climate action and solidarity,” said Helen Mountford, from the World Resources Institute. “It should provide a positive jolt ahead of Cop26, at a time when international solidarity is badly needed.”

Rich countries are thought to have missed a collective target to deliver $100bn annually by 2020 to help vulnerable countries reduce their emissions and cope with climate impacts. According to the OECD analysis of the most recent complete dataset, climate finance flatlined in 2019, leaving a $20bn gap that is unlikely to have closed since the coronavirus pandemic hit.

Over the past decade, the US has been a laggard when it comes to climate finance. Former president Barack Obama pledged $3bn to the Green Climate Fund, the UN’s flagship climate finance initiative, but delivered just $1bn before leaving office.

His successor Donald Trump reneged on that pledge and in 2017-18 the US delivered less climate finance than France, Germany, Japan or the UK despite having an economy larger than all of them combined.

At a leaders’ summit held on Earth Day in April, Biden promised to double finance from Obama-era levels to $5.7bn, with $1.5bn earmarked for adaptation. The pledge was criticised as inadequate by campaigners.

“The increased US contribution reduces the shortfall, but is not enough to meet the goal agreed at Copenhagen,” Sarah Colenbrander, director of climate at the Overseas Development Institute (ODI), told Climate Home News.

The US’ new commitment does not reflect its fair share of the $100 billion climate goal, said Colenbrander. Based on its gross national income and cumulative emissions, the US should be providing between $43-50bln each year in climate finance, according to ODI analysis.

“Most of the remaining shortfall can be attributed to Australia, Canada, Japan, Italy and the UK. Each of these countries should be mobilising an additional $2-4 billion a year to fulfil their fair share of the current climate finance goal,” said Colenbrander.

Several NGOs subscribe to an even higher estimate of what the US owes to the developing world, based on need and the damage caused by its historic emissions: $800bn over the decade to 2030. Karen Orenstein, director of the climate and energy justice programme at Friends of the Earth, said the new pledge was “extraordinarily insufficient compared to the need and out of line with what climate science and justice demand”.

“Almost all rich countries, apart from Luxembourg, Norway and Sweden, need to commit more,” said John Nordbo from Care International. “We are inching forward on this issue, but the problem is that meanwhile, thousands more people are being displaced or dying. Climate-induced famine is destroying Madagascar, floods are sweeping across an already war torn Yemen… Considering how much money these countries have made from carbon emission-creating industries, not one of them is moving fast enough.”

In his speech to the UN, Biden said that the world was approaching a “point of no return” and reeling from “widespread death and devastation from the borderless climate crisis”. He urged all nations to bring their “highest possible ambitions to the table” when leaders meet at Cop26 in Glasgow, UK in November.

We must build on this momentum#UNGA #COP26