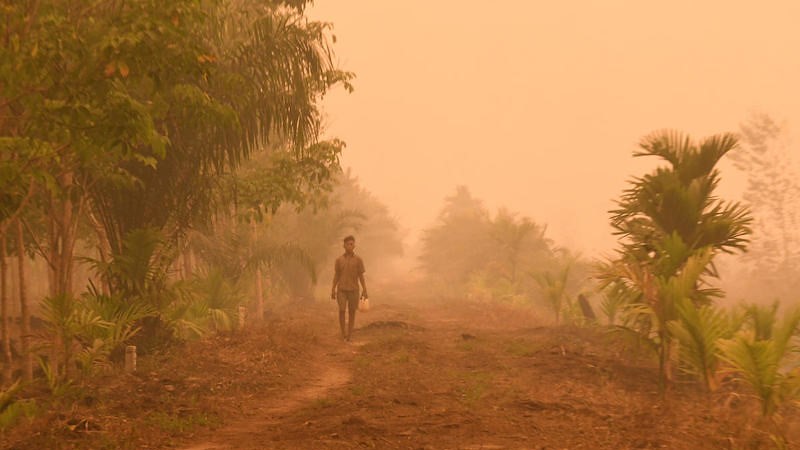 A villager walks in a plantation covered by haze from fires near burned peatland in an oil palm concession (Photo: Muhammad Adimaja/ Greenpeace/Flickr)

The future of forest protection in Indonesia has been put into doubt after the government abruptly ended a decade-long funding agreement with Norway.

Under the $1 billion payment-by-results deal signed in 2010, Norway agreed to pay the Indonesian government for curbing its emissions by conserving peatlands and forests.

After setbacks and delays, the two countries were discussing a first payment of $56 million when Jakarta unilaterally terminated the accord.

In a statement dated 10 September, Indonesia’s foreign ministry said the decision was based “on the lack of concrete progress” in Norway delivering the money and followed “a series of thorough inter-ministerial consultations”.

It insisted the decision “will in no way to affect the Indonesian government commitment to reduce greenhouse gas emissions”.

But campaigners in Indonesia are concerned the move threatens the country’s climate goals. It removes an incentive to protect the forests just as a moratorium on new palm oil concessions lifts and the government is allocating large swathes of land to farming in a food security push.

An editorial in the Jakarta Post slammed Indonesia’s decision as “rash” and giving an “impression of intolerance and arrogance that is rarely displayed in such high-profile bilateral partnerships”.

The government needs the funding, under a UN initiative known as Redd+, to conserve its rainforest, the newspaper said.

While it took a decade for Indonesia to report, measure and independently verify its forestry emissions to international standards “the government chose to bring it all back to square one,” it added.

Indonesia contains 10% of the world’s tropical rainforests and 36% of its tropical peatlands. These carbon-rich ecosystems are threatened by commodity-driven deforestation and fires.

Emissions from land use change and the forestry sector have contributed almost half of Indonesia’s emissions over the last 20 years.

Under its recently updated 2030 climate plan, Indonesia named the Redd+ initiative as “an important component” to address emissions from the sector. It counted on the scheme to contribute more than half the emissions reductions needed to meet its goal.

Campaigners have urged both sides to find a way to continue to work together. “Indonesia is far from meeting its climate target and international collaboration is still needed,” said Taufik.

Indonesia’s forests are under pressure from demand for land to produce palm oil, paper, timber and food.

The coronavirus pandemic disrupted food supply chains, putting Indonesia’s reliance on imports in the spotlight. Temporary regional shortages of key commodities including rice in 2020 prompted the government to announce a series of “food estate” initiatives, allowing for trees to be cleared for agriculture.

Greenpeace and other forest NGOs have warned that almost two million hectares of forest are threatened by the farming push, an area roughly the size of Wales or New Jersey. “Similar projects in the past were thinly veiled land grabs that offered massive profits to the timber and palm oil industries while doing little or nothing to improve food security,” they wrote in March.

While primary forest loss has significantly decreased since 2017, deforestation rose at the start of the coronavirus pandemic and the government rolled back environmental protections to facilitate business and reboot economic development.

On 19 September, a three-year moratorium on new permits for palm oil concessions came to an end. The government has given no indication it plans to extend the ban.

The collapse of the agreement took the Norwegian government by surprise on the eve of its parliamentary election.

Responding to the announcement, Norway’s environment ministry said both governments had been engaged in discussions on a legal agreement for the transfer of the funds and the talk were “constructive and progressing well”.

A spokesperson for the ministry told Climate Home that a few issues remained “but we strongly believe they could have been resolved”.

Under the 2010 agreement, both countries agreed that the detailed terms and conditions for the payment would be agreed between Norway and a bespoke Indonesian Environment Fund to receive the money.

The spokesperson said Norway was notified the fund had become operational in early June and “quickly intensified discussions”. He added that Norway had already allocated the money in its budget and was looking forward to disbursing it.

Despite the incident, Norway said it had “full confidence” in Indonesia’s emission reduction calculations, describing the nation as “a world leader in combating tropical deforestation”. It said it stood ready to support its efforts to protect its forests and peatlands.

Tørris Jæger, director of Rainforest Foundation Norway, told Climate Home negotiations on the formalities for payments had been “difficult” and included disagreements on the conditions required by Norway for the money to be disbursed.

Jæger described the end of the partnership as “a setback” but said he did not consider this to be “a signal that deforestation and forest degradation are on a reverse agenda”.

But campaigners say Indonesia’s lack of transparency in its forest management and increasing land conflicts with indigenous peoples under president Joko Widodo likely contributed to tensions.

Marcus Colchester, senior policy advisor of the Forest Peoples Programme, told Climate Home: “It is not so surprising that discussions were protracted. Demonstrating positive results is quite difficult, especially as there is still a lack of transparency about forestry and palm oil concessions and indigenous peoples’ rights are still not upheld.”

Colchester said the end of the partnership would threaten the government’s social forestry programme, which aims to grant local communities rights to manage 12.7 million hectares of forests and help to reduce deforestation.