Youth, climate disaster victims and vulnerable countries could use the latest UN science report as evidence to sue polluters for damages or remedial action 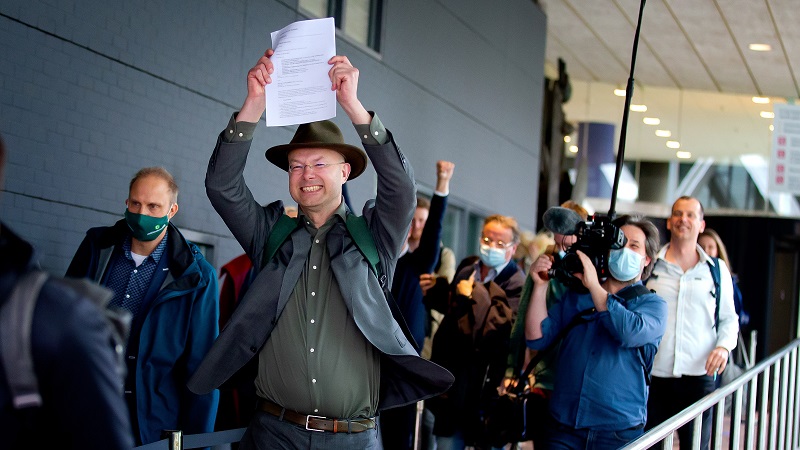 A lawyer for Milieudefensie in the case against Shell holds the verdict ordering the oil company to cut its emissions (Photo: Bart Hoogveld/Milieudefensie)

The findings of a major climate science report, backed by 195 governments, will strengthen the case of plaintiffs seeking to force governments and companies to take greater climate action, legal experts have told Climate Home News.

The report published by the Intergovernmental Panel on Climate Change (IPCC) on Monday is expected to become a critical piece of evidence in climate litigation cases.

It found that it is “unequivocal” that human activity is causing climate change and there is “high confidence” that human-induced greenhouse gas emissions are the main drivers of more frequent or intense heatwaves, glaciers melting, ocean warming and acidification.

Past versions of the IPCC assessments have been extensively used in climate lawsuits and relied on by judges to establish a link between anthropogenic emissions and climate impacts.

The starker language and findings of this latest report have the potential to strengthen climate lawsuits against both governments and companies, Kate Higham, who coordinates the Climate Change Laws of the World project at the Grantham Research Institute on Climate Change and the Environment, told Climate Home.

This is important, she said, because researchers have found that the evidence used by lawyers in climate cases often lagged behind the most up-to-date science that could help establish causal links between emitters and climate impacts.

A study published in Nature Climate Change in June, which analysed evidence from 73 lawsuits, concluded that in most cases, there was no attempt to quantify the extent to which climate change was responsible for the climate-related events affecting the plaintiffs.

Now, legal experts are expecting the latest IPCC report to strengthen the evidence and the claims made by plaintiffs. The report recognises the progress of attribution science in linking individual extreme weather events such as heatwaves, heavy rain, droughts and tropical cyclones to greenhouse gas emissions with more certainty.

Rupert Stuart-Smith, a founding member of the Oxford Sustainable Law Programme who researches climate change litigation and attribution science, told Climate Home the report “provides, implicitly, a call to arms for the use of evidence of this type”.

“By and large, attribution science hasn’t had its day in court,” he said, adding that “many of the cases are still unsuccessful for legal, rather than scientific reasons.”

Attribution science can help establish the causal relationship between emissions from a company and the losses experienced by a plaintiff in cases seeking compensation from major emitters for example.

It can also be used in lawsuits which have asked a court to instruct a government or company to deepen their emission reductions by setting out the consequence of failing to cut those emissions.

“With the right channels of communication between the legal and scientific communities,” scientists could be made aware of legal interests and provide evidence for specific cases, he said.

“Of course there’ll still be legal issues which need to be ironed out. But if we are able to get past those initial legal obstacles, it doesn’t seem far-fetched anymore to suggest that future cases will in fact force companies to pay compensation to communities affected by climate change,” he said.

Cases that have already been filed but haven’t passed some of those legal hurdles could benefit from the latest scientific assessment to strengthen their evidence to the courts, Higham said.

“There is an argument that this report will be useful in cases similar to the Milieudefensie vs Shell case in showing that emitters have a responsibility to reduce emissions going forward because we know that these emissions will contribute to climate harm,” she said.

That case, which resulted in a Dutch court ordering Royal Dutch Shell to cut its emissions 45% by 2030 compared with 2019, was the first time a company was held legally responsible for its role in causing the climate crisis.

The IPCC’s assessments of the remaining carbon budgets to meet the Paris Agreement temperature goals could further help start a conversation in the courts over who needs to reduce emissions and by how much, Higham added.

For Kate McKenzie, of the Strathclyde Centre for Environmental Law and Governance the report will, above all, strengthen claims calling on governments to do more to cut emissions.

The report’s stronger language on the need to reach “at least net zero CO2 emissions” to stabilise the climate could lead to “potential tougher judgements” in asking governments to go beyond net zero emissions, McKenzie told Climate Home.

Greater understanding of long-term climate impacts set out in the report could reinforce the cases of youth claimants, who have increasingly argued that poor climate action is violating their rights to a humane future, she said.

And the report’s emphasis on regional differences in climate projections offers stronger evidence for countries to sue each other over climate impacts, McKenzie added.

“I do think that this provides stronger evidence if a small island state or an African nation starts bringing a case against a larger emitting country in the international legal arena,” she said. Although no such case has yet been filed, McKenzie said the prospect could not be ruled out.

Campaigners are ready to take on this call to action.

“We’re not going to let this report be shelved by further inaction. Instead, we’ll be taking it with us to the courts,” said Kaisa Kosonen, senior political advisor at Greenpeace Nordic.

“By strengthening the scientific evidence between human emissions and extreme weather the IPCC has provided new, powerful means for everyone everywhere to hold the fossil fuel industry and governments directly responsible for the climate emergency.”