Rapid warming of the Arabian Sea is driving more frequent and intense cyclones along India’s west coast, which the region is not prepared for 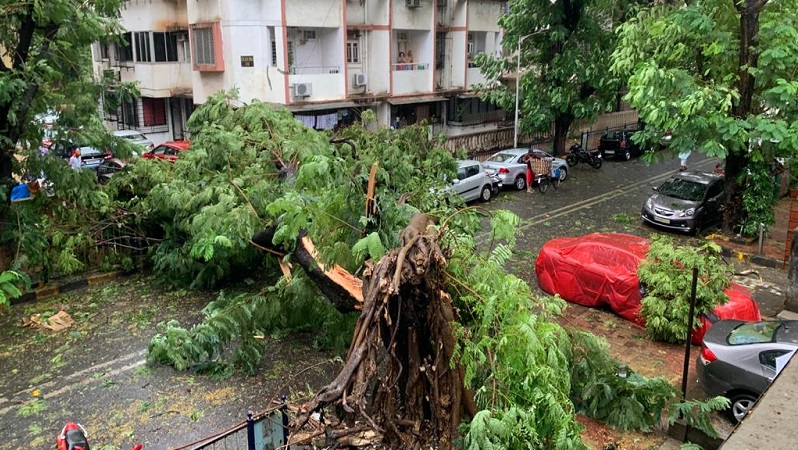 A tree fell on buildings in a residential street in Mumbai in the wake of cyclone Tauktae (Photo: Thomas Spencer)

The Indian state of Gurajat has been battered by the worst cyclone to hit the country’s western coast in more than two decades, as global warming fuels more intense cyclones in the Arabian Sea.

Cyclone Tauktae made landfall as an “extremely severe” cyclonic storm in the Saurashtra region late on Monday, with winds gusting up to 220 kilometres per hour.

It is the worst cyclone to hit the region since 1998 and the fifth strongest tropical cyclone on record in the Arabian Sea, according to the Joint Typhoon Warning Center.

At least 16 people have died and more than 90 people are missing after a barge owned by India’s Oil and Natural Gas Corporation and deployed for offshore drilling sank off the coast of Mumbai, near the Heera oil fields, with 273 people on board.

Deputy chief of naval staff Murlidhar Sadashiv Pawar told the Indian news agency ANI this led to “one of the most challenging search and rescue operations I’ve seen in the last four decades”.

The Arabian Sea was not previously known for powerful cyclones. But scientists say rising greenhouse gas emissions and warming waters are leading to the formation of more intense cyclones off Indian’s west coast.

“The Arabian Sea used to be cyclone shy, but no more,” said Roxy Koll, a climate scientist at the Indian Institute of Tropical Meteorology.

“Among the tropical oceans, the western Indian Ocean including the Arabian Sea registers the fastest warming rates,” he told Climate Home News. “This rapid warming in the Arabian Sea has hence resulted in an increase in both the frequency and the intensity of cyclones in the basin.” 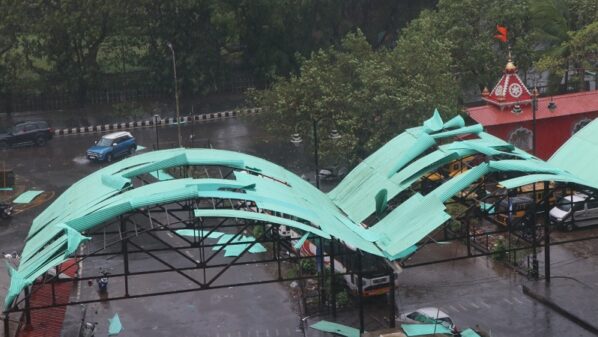 Destruction after the passage of Cyclone Tauktae past Goa (Photo: Parthasarathi Rout)

The event has raised serious concerns of a new rise in Covid-19 infections. More than 200,000 people were evacuated from their homes and moved to shelters, where social distancing is hard to maintain.

India is grappling with a catastrophic wave of coronavirus cases, which has overwhelmed hospitals across the country. Cyclone Tauktae has put even more pressure on local health facilities.

In Mumbai, a major vaccination centre suffered serious damage as winds lashed the city. Hundreds of Covid-19 patients in temporary facilities were discharged or moved to hospitals as the cyclone approached. The city of 20 million people recorded more rain in 24 hours than at any other time during the month of May in recorded history.

Standing tall and strong even with all the pounding of these gigantic waves
.#architecture #mumbai #CycloneTauktae #TauktaeCyclone #CycloneAlert #CycloneTauktaeupdate pic.twitter.com/cDsKHFkq6l

Climate projections dating from 2013 forecast an increase of 40-50% in tropical cyclone frequency over the Arabian Sea. For researchers, Cyclone Tauktae is evidence of that trend.

Vineet Kumar Singh, a colleague of Koll’s at the Indian Institute of Tropical Meteorology who researches cyclones in the north Indian Ocean, said on Twitter that since satellite records began in India in 1980, this was the first time that pre-monsoon cyclones had been recorded in the Arabian Sea for four consecutive years.

Cyclone Tauktae was the strongest pre-monsoon Arabian Sea cyclone in the last decade, he added. Monsoon season runs from July to September.

A review by the two researchers of weather observations from the past four decades in the north Indian Ocean found cyclones rapidly intensifying within 24 hours, when surface temperatures exceeded 30C. Tauktae followed this pattern.

“This is a challenge both to forecasters and the disaster management on ground,” said Koll. 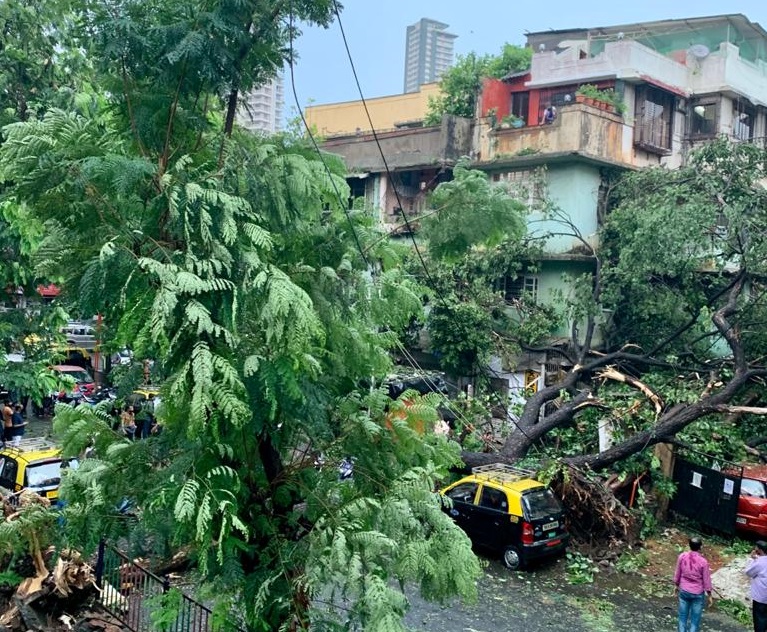 During the post-monsoon season, warmer waters have led to an increase in the frequency of extremely severe cyclones in the Arabian Sea, according to 2017 study published in Nature Climate Change. It warned that continued increased emissions “will further amplify the risk of cyclones in the [Arabian Sea]”.

Koll told Climate Home the west coast of India is not prepared for frequent and intense weather events, unlike the eastern coast where cyclones are frequent.

While forecasts have much improved and predicted the cyclone nearly a week in advance, “we cannot wait for forecasts every year to evacuate people,” Koll said. “And we cannot evacuate houses, infrastructure, cars, and ecosystems.

“India should prepare a risk assessment for its coastline and take precautionary measures using both natural defenses like mangroves and artificial defenses as well as rehabilitate people from high-risk zones.”