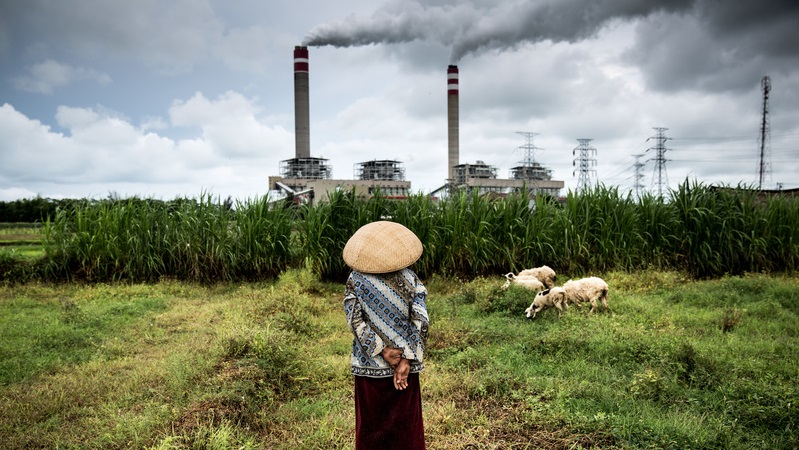 A woman watches over her sheep that graze near a coal power plant in Jepara, Central Java (Photo: Kemal Jufri/Greenpeace)

In a briefing to Indonesian media, Zulkifi Zaini, president of the state-owned electricity company Perusahaan Listrik Negara (PLN), said the company would invest in renewables and aim to become carbon neutral by 2050.

“After we finish developing the [35GW of additional power generating capacity], we will fulfil Indonesia’s electricity needs using only renewable energy,” Zulkifi said.

Indonesian analysts and campaigners told Climate Home News the move was a “good sign”. But they warned that by continuing to build already approved power plants, Indonesia was burdening itself with assets that would become stranded while damaging citizens’ health and contributing to the climate crisis.

Lidy Nacpil, co-ordinator of the Asian Peoples’ Movement on Debt and Development, said PLN “should seriously plan for and implement a rapid and just transition out of coal, instead of locking in Indonesia into more decades of coal energy.

“In addition to the impacts of coal projects to communities in Indonesia, they are putting people in Indonesia, and the rest of the world in serious risk of climate catastrophe”.

Indonesia was the world’s second biggest coal producing country in 2019 and PLN is the 15th biggest owner of coal power plants. Its renewable energy deployment has lagged behind other nations in the South Asian regions, such as Vietnam.

Under its 2015 energy plan, Indonesia pledged to build 35GW of new power capacity, 20GW of which would be from coal.

These are the projects PLN president Zaini said would be completed. Most of the plants currently under construction are backed by overseas coal financing from China, South Korea or Japan.

Putra Adhiguna, researcher at the Institute of Energy Economics and Financial Analysis (Ieefa), told Climate Home that projects for which contracts have been signed are difficult to cancel.

Instead, the focus should be on stopping projects where companies have not yet signed power purchase agreements (PPAs) or reached financial close, he said.

PLN has not made clear which projects are going ahead to meet its 35GW goal.

Under different scenarios for reaching carbon neutrality some time between 2045 and 2070, commissioned by national planning minister Suharso Monoarfa, coal will need to be phased out of energy use by 2045.

Since the life cycle of a coal power station is around 40 years, the ongoing construction of coal plants risks leaving Indonesia paying for its coal infrastructure until the late 2060s. The Indonesian coal industry is heavily subsidised.

Global Energy Monitor analyst James Browning said PLN’s announcement was an attempt to spin public opinion ahead of the publication of its long-awaited electricity supply business plan for 2021-2030.

“PLN is doing damage control and trying get credit for a shift towards renewables…. as economically unviable and unfundable coal plants are cancelled in the new plan,” Browning said.

Public and private finance has been increasingly moving away from coal power. Last month, South Korea said it would no longer finance overseas coal projects. Japan is under pressure to do the same and China has placed an increased emphasis on greening its overseas investments.

Foreign policy analyst Esther Tamara said the move by Indonesia’s utility to announce an end to coal power was a reaction to domestic pressure from campaigners and international pressure led by the US.

Zaini, of PLN, told the press briefing that Indonesia would invest in wind and solar. These currently make up a a tiny percentage of Indonesia’s electricity production.

A 2019 report by the Asian Development Bank concluded that renewable development in Indonesia had been hindered by low tariffs on wind and solar, a lack of expertise from project developers and financiers and quotas which require developers to source a certain amount of their supply chain domestically.

Zaini added that PLN would pursue co-firing, where biomass is mixed with coal and burned for energy. The International Renewable Energy Association (Irena) estimates that this can reduce coal use by 20-50%, although the climate benefits depend on where the biomass comes from.

Ember analyst Dave Jones said: “Indonesia’s electricity transition has been lagging – it’s one of only three G20 countries, alongside Saudi Arabia and Russia, that has yet to start building wind and solar in earnest.

“Saudi Arabia has pledged to make 50% of its electricity from renewables by 2030 from near-zero today. With Indonesia’s announcement, that leaves Russia as the only G20 country that has yet to embrace wind and solar.”