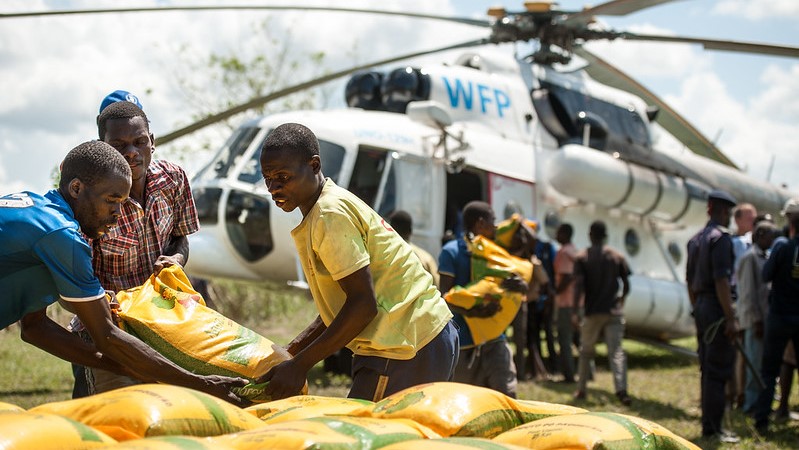 The UK is gathering ministers from climate vulnerable and donor countries for a virtual summit on Wednesday to identify practical steps to improve developing nations’ ability to cope with intensifying climate impacts.

But the UK’s planned aid cuts to some of the world’s most climate vulnerable nations and research institutions is undermining international solidarity and contradicting the UK’s goals, practitioners have warned.

As developing countries reel from the economic downturn from the coronavirus pandemic, climate finance has been increasingly delivered in the forms of loans rather than grants, with only about one fifth of the money supporting governments to adapt to climate change.

Speaking to Climate Home News, Anne-Marie Trevelyan, energy and clean growth minister and the UK Cop26-host’s champion on adaptation and resilience, said the summit will allow “a gritty conversation about what we need to be all doing differently, [and] better” for vulnerable nations to become more resilient to climate shocks.

“We’ve got to think differently and much more holistically in order to help our climate vulnerable friends and partner be able to tackle these issues,” she said.

The one-day virtual ministerial aims to maintain trust between the world’s poorest and richest nations and identify concrete actions around four key themes: adaptation, access to finance, quantity and quality of finance and debt relief for sustainable development.

More than 50 representatives from donor countries, including G7 nations, as well as emerging economies such as India and South Africa, developing nations, small island states and multilateral institutions are due to attend.

For academics and practitioners though, planned UK government cuts to research threaten climate-related projects and directly contradict the meeting’s objectives.

In November 2020, the UK government announced it would cut overseas development assistance from 0.7% to 0.5% of its national income until “the fiscal situation allows” the country to return to its previous commitment. The government insisted climate change spending would be prioritised and a commitment to spend £11.6 billion in climate finance in the next five years will be upheld.

But earlier this month, a government body called UK Research and Innovation wrote to higher education, research intuitions and businesses to inform them that cuts to overseas development assistance would leave a £120 million ($165m) hole in funding for the year 2021-22, and lead to inevitable cuts in grant support.

One of the projects threatened by the cuts aims to enhance the role universities play in addressing climate change in four vulnerable nations: Fiji, Kenya, Mozambique and Brazil.

Led by University College London, it uses participatory research to support 12 universities to design and implement practical actions to cut emissions or adapt to climate impacts.

In Mozambique, project partners are working with the local university, authorities, businesses and civil and society to explore ways to strengthen the resilience of the city of Beira, which in recent years has been hit by a series of devastating cyclones to which it is struggling to recover.

The three-year project, which started in February 2020 is at risk of not receiving any funding beyond July.

Patricio Langa, of Eduardo Mondlane University, who is leading the project in Mozambique, told Climate Home News the threats of cuts was “distressing” and “inconsistent” with the UK’s discourse on the need for climate action.

“They are not practicing what they are preaching,” he said, adding that the decision had damaged the reputation and confidence in UK institutions as reliable research partners.

“This is a project we believe in very strongly and has a strong connection with the UK government’s stated commitment to climate change,” Tristan McCowan, project lead and professor of international education at University College London, told Climate Home News.

McCowan said education was a “critical part of the puzzle” for climate action and the cuts would “contradict” the UK’s own commitment to serious action this year.

A UK government spokesperson said officials were still working through what the cuts mean for individual programmes and that no decisions have yet been made. “We remain a world-leading aid donor and we will spend more than £10 billion this year to fight poverty, tackle climate change and improve global health,” they said.

The UK, which is hosting the G7 in June, is the only member of the group of rich nations to be cutting aid in response to the coronavirus pandemic, Andrew Mitchell, a conservative lawmakers and former secretary of state for international development, told an event last week.

Last week, campaign groups in the UK wrote to Cop26 president designate Alok Sharma and foreign minister Dominic Raab urging the UK government to reverse the cuts, describing aid as a “prerequisite for solidarity with the most vulnerable”.

“The planned cuts to the aid budget undermine the UK’s credibility as hosts of the climate and development ministerial, G7, and Cop26,” they wrote.

“It’s an inexplicable shot in the foot done for cynical and ill-informed reasons and it’s a terrible mistake,” he said, adding that prime minister Boris Johnson and “the beastly treasury” overruled foreign affairs officials’ concerns over the decision.

Minister Trevelyan defended Johnson’s commitment to climate action. She recognised there was “an enduring sense of anxiety” over debt challenges, the quantity and access to finance among vulnerable nations but insisted the UK prime minister had “a genuine passion” to host an “an inclusive Cop26 that is actually going to challenge the existing norms and think how we move forwards”.

Experts consulted during workshops last month ahead of Wednesday’s meeting have made key recommendations to ministers. These include committing to a set principles for projects to be locally-led, integrating climate action into long-term development strategies, increasing public finance and the share of grant-based and adaption funding.

Campaigners have urged donor countries to commit to announce new finance pledges for 2025, exceeding existing commitments and increase financial support for loss and damages that cannot be adapted to.

Ministers will be discussing each of the four issues across two sessions to accommodate different times zones. A chair’s summary will sum up the discussions and set out actions that could be taken forward by the G7, the G20, and Commonwealth heads of government meeting ahead of Cop26.