Carbon markets are proving resilient to the coronavirus pandemic

In contrast with the aftermath of the 2008 financial crash, carbon prices have not taken a big hit from Covid-19, reflecting improvements in market design 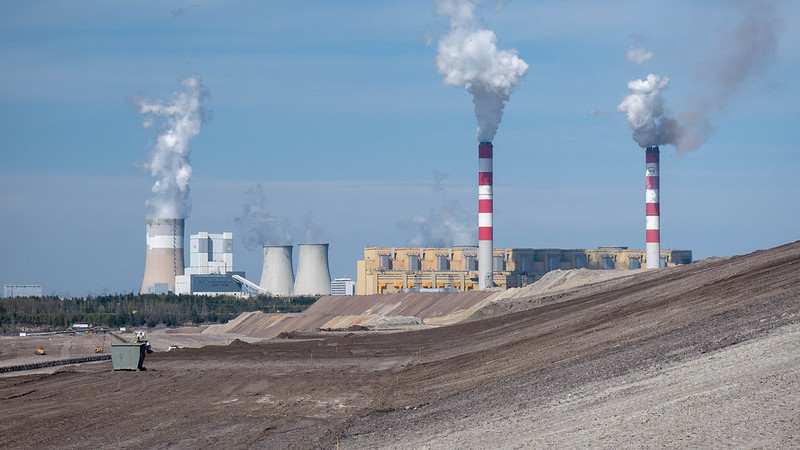 Bełchatów power plant, Poland, is one of the installations required to hold pollution permits under the EU emissions trading system (Pic: Roman Ranniew/Flickr)

After the 2008 global financial crisis, the price of pollution permits on the EU emissions trading system plummeted, hitting confidence in carbon markets as a lever for climate action.

The carbon price fell by more than 80% between mid-2008 and mid-2013, as the recession and other factors reduced demand for emissions allowances from power generators and heavy industries. Other systems also went through a period of low carbon prices.

With the coronavirus pandemic portending another long and deep economic downturn, some may fear another hit to carbon markets.

Fortunately, it looks like this time will be different.

It’s impossible to know the full impacts of Covid-19 on carbon markets at this stage: the inventories that governments maintain to track their emissions typically lag, and the world has not yet fully recovered from the public health and economic crises posed by the pandemic.

However, we’re seeing clear signs that the economic impacts of the pandemic will not prove a long-term drag on the effectiveness of carbon markets. The Emissions Trading Worldwide Status Report 2021, published annually by the International Carbon Action Partnership (ICAP), outlines some of the reasons why. 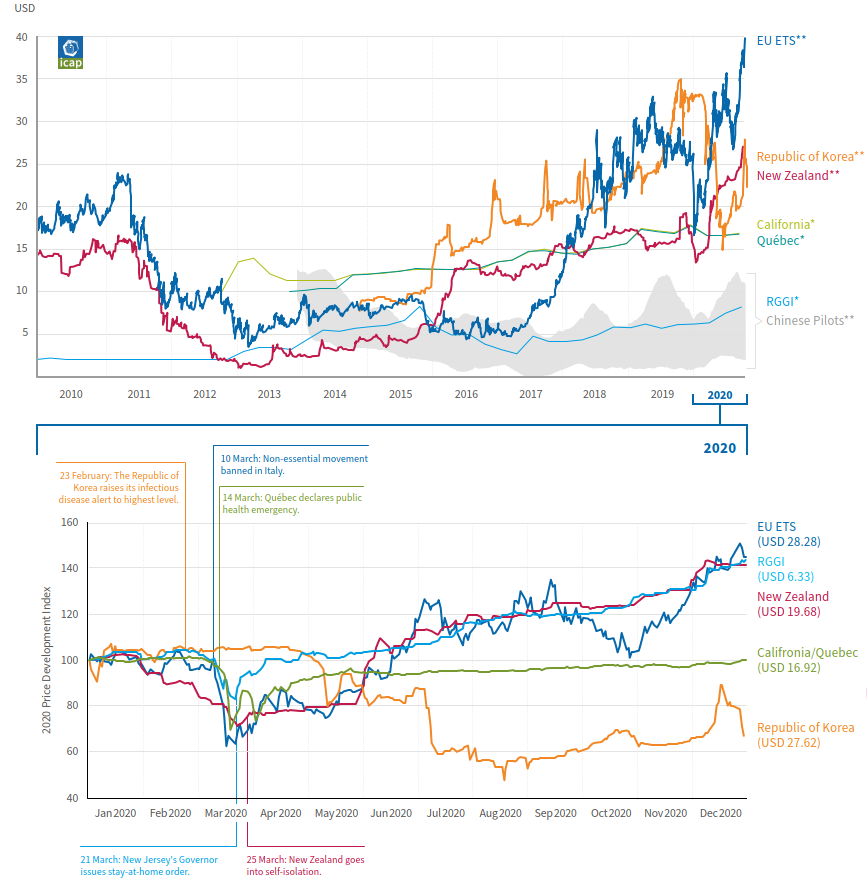 Allowance prices in the major, mature carbon markets have quickly regained their footing. Prices predictably fell across most systems, especially around March 2020 as governments enacted lockdowns to contain the virus, but by June most markets had begun to recover (see the figure above).

In the EU, allowance prices at the close of 2020 were 45% higher than where they started the year. In New Zealand, they were up 41%. In North America’s Regional Greenhouse Gas Initiative prices closed 43% higher, while in the linked market of California and Québec prices recovered to pre-pandemic levels.

This carbon market resilience is likely thanks in part to two factors.

Firstly, carbon markets have established mechanisms to create more stable and predictable conditions as well as respond to market shocks, and these tools are more widespread than they were in 2008. For instance, the EU’s Market Stability Reserve came online in 2019 to address allowance surpluses by adjusting the supply based on certain criteria and made an impact even before the pandemic.

Secondly, market participants have clear signals from governments that the supply of allowances overall will decline more rapidly in the years ahead under more ambitious 2030 targets and mid-century net-zero commitments that are set in law in some jurisdictions, both of which boost long-term prospects for higher prices.

The past year for carbon markets isn’t just a story of overcoming a pandemic – it’s also one of growth. Largely driven by the launch of China’s national ETS, global emissions covered by a mandatory carbon market nearly doubled to 16%, the 2021 ICAP Status Report finds. Starting with power generation and expanding to other sectors in the coming years, the Chinese national ETS is already the largest system in the world, covering 4 billion tonnes of CO2, about 40% of the country’s total emissions.

In addition to the 24 systems worldwide that are currently in operation, another 22 governments are considering or actively developing an ETS. Much of the activity is happening elsewhere in Asia, where South Korea has the region’s longest-standing and most expansive ETS. Indonesia and Vietnam are taking legal and regulatory steps to test and launch future systems, while Japan is taking renewed interest in carbon markets after announcing a net-zero commitment and the Philippines is considering ETS legislation. In the Americas, Colombia is preparing the launch of a pilot system, while carbon markets in various individual US states and through regional initiatives continue to attract interest and near completion.

Christopher Kardish is an advisor at Adelphi, which runs the International Carbon Action Partnership.