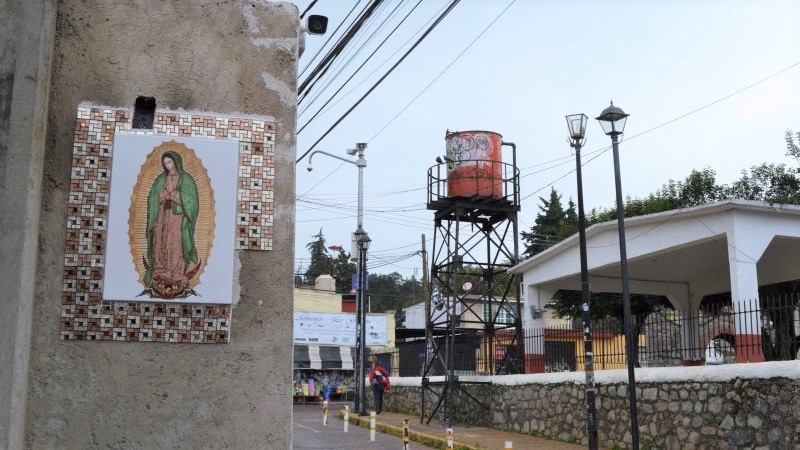 By Kylie Madry in Mexico City

Severa Galicia Flores hasn’t had clean water to her house since 2017, when a 7.1-magnitude earthquake rocked central Mexico – hitting the San Gregorio Atlapulco neighbourhood, where she lives in Mexico City, hard.

“After that, every time we turned on the water, it came out yellow,” Galicia Flores said. “We tried drinking it for a while, disinfecting it with bleach, but the kids started getting sick.”

The 68-year-old and her family have tried a variety of options over the years, knowing the once-clean water was a lost cause.

“We live close to a city well,” explained Galicia Flores’ daughter Elena Hernández Galicia, “but that’s where only yellow water comes out. There’s even a sign out front: ‘Not drinkable.’”

The family is one of many who regularly struggle to get clean water in Mexico City – an estimated 1.3 million of the city’s almost 9 million residents lack regular water access. As coronavirus rips through town, water-poor households are particularly vulnerable to infection.

Last year, the general coordinator of the Water System of Mexico City (Sacmex), Rafael Bernardo Carmona, admitted that more than 40% of the city’s running water is lost to leaks. 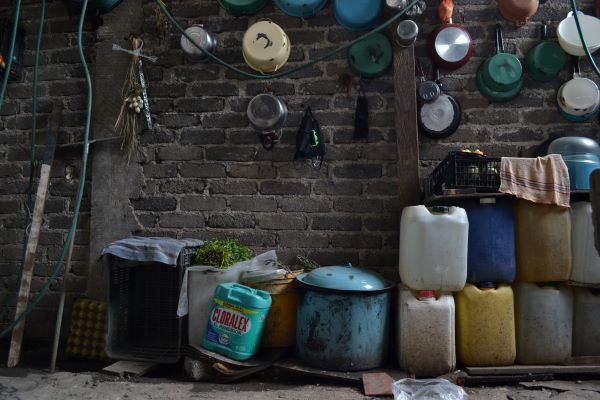 In Mexico, water has been a constitutionally protected human right since 2012 and is heavily subsidised – if it arrives at all. Pedro Moctezuma Barragán, an environmental sociology professor at the Metropolitan Autonomous University (UAM) in Mexico City and water activist with Agua para [email protected], Agua para la Vida (Water for All, Water for Life), was key to the fight for constitutional recognition. “Our government made this promise to us,” he said, “and now they have to keep it.”

San Gregorio Atlapulco, where Galicia Flores lives in Xochimilco, has been labeled by the Mexico City government as a “priority attention neighbourhood,” with some of the highest cases of the novel coronavirus in the area.

Most residents of the area are in a similar position to her, some going days without water coming out of the tap, forcing them to choose between regular handwashing and other daily activities like washing dishes, laundry, and bathing. It’s a cruel twist of irony, seeing as “Atlapulco” is Nahautl for “where the water churns” – the neighbourhood was known, for centuries, for its fresh water. 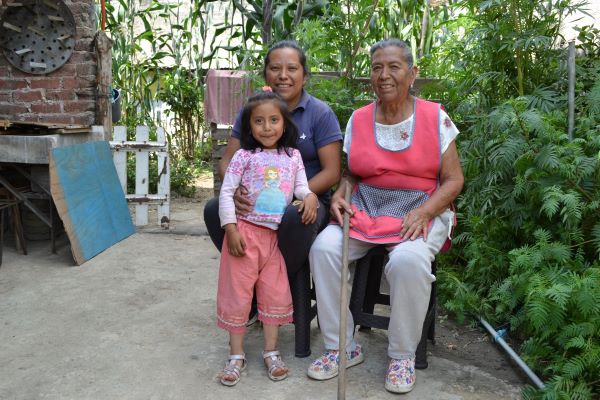 Luckily for Galicia Flores and her family, local nonprofit Isla Urbana is installing a rainwater harvesting system in their house today, almost three years after the earthquake. They were picked from a handful of applicants in the neighborhood.

“[The rainwater harvesting systems] are especially important given the sanitary crisis,” said Emilio Becerril, Isla Urbana’s public policy and management coordinator. “With more, and better, water, [recipients] can have higher levels of hygiene and health, free up time for other productive activities like education, work, etc, and apart from that, it significantly reduces the stress caused by water precarity.”

The group hopes to install 22 systems through September, with another 15 coming in October. Since its founding in 2015, Isla Urbana has set up around 350 in San Gregorio Atlapulco alone.

City officials and some scientists tout Isla Urbana’s mission as the perfect solution for Mexico City’s crumbling water infrastructure. The group won a contract with the city’s environmental ministry to design and implement a city-wide program, installing 10,000 systems in 2019. It is in talks to carry out another phase in 2021. 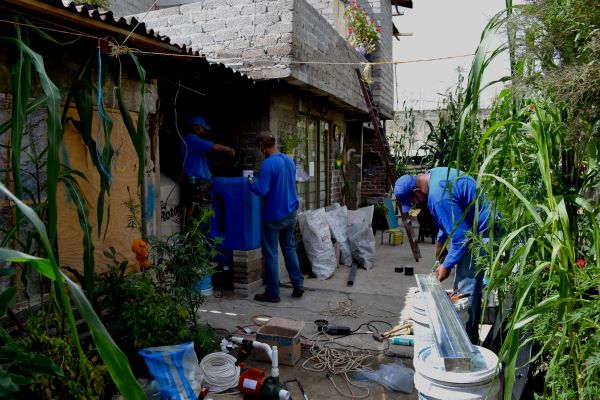 The struggle for water access is not just an engineering problem, it is deeply political.

Alejandro Ugalde González remembers how water used to flow freely through San Bartolo Ameyalco, the neighbourhood where he grew up. With a freshwater spring that had provided water to residents for centuries, things changed in San Bartolo when mega-housing developments started to go up nearby, he says.

“These massive developments for the rich, every house has their own cisterns that hold up to 20,000 gallons of water, they use it to wash their cars, their horses, water their gardens, everything,” Ugalde González said. “And meanwhile, we stopped getting water in San Bartolo. Now the neighbourhood is split in two: the higher part and the lower part of the neighbourhood. We have to alternate water. Some people get water during the day, some just at night.”

He’s loath to point all of the blame at the developers, however, saying that the local government, the Álvaro Obregón municipality, has permitted it. “Of course if we ask them if it’s happening, they’ll deny it,” he said. “But where else could all of this water be going? We know how much water comes out of the spring. But we’re not getting any of it.”

That’s why, in 2014, the neighbours of San Bartolo distanced themselves from the municipality, reclaiming its “traditional representation” as a pueblo originario (a small town that was later absorbed into Mexico City). 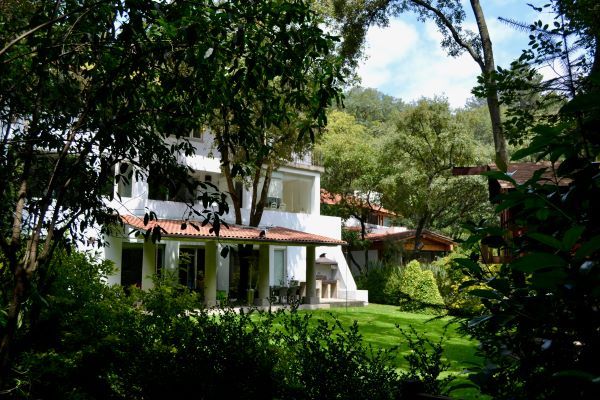 In the gated communities of San Bartolo Ameyalco, residents have plenty of water to keep their lawns lush (Pic: Kylie Madry)

This means that they now have a semi-self governing body, which Ugalde González was appointed head of in January, though many administrative issues like water management remain in the hands of the city.

The move was spurred by the events of 21 May, 2014, when residents sought to block the installation of pipes they feared would reroute water to other neighbourhoods. The municipality sent 1,500 police to “protect” the installation. In the resulting conflict, 100 residents were wounded and five detained for more than a year.

“It was an enormous violation of human rights,” Ugalde González said, “And the municipality wonders why we don’t trust them?”

In the middle of the pandemic, many residents still go days without water. “The municipality tells us they’ll send us pipas [water tankers], but they refuse to come here,” Ugalde González said. And just like in San Gregorio Atlapulco, Covid-19 cases have been high in San Bartolo Ameyalco – though the neighbourhood dropped off the government’s “priority attention” list in August.

There are other factors at play besides water, of course: Ugalde González points to an early lack of education around the coronavirus, pre-existing health conditions, and little government support as contributors to the havoc the virus has played in the area for the past six months. 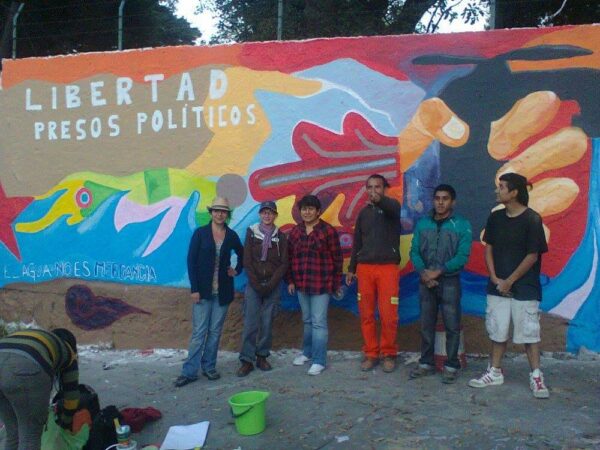 Residents of San Bartolo Ameyalco painted a mural on the side of a water-pumping station in the neighborhood, the site of the May 21, 2014 clash with police. The mural reads “Freedom for political prisoners,” and “Water isn’t merchandise.” (Photo credit: Alejandro Ugalde González)

For citizens with low confidence in their government, rainwater harvesting systems could give a needed boost of trust in a city known for its rainy season – and its flooding. Every afternoon for close to half the year, massive amounts of water drop down into the city like clockwork  – leaving billions of gallons of potentially usable water to waste. Since Mexico City lacks a comprehensive water drainage system, most of that rain floods out onto the streets, into metro stations, and into homes, costing Mexico an estimated $230 million (£178 million) a year.

The city’s drainage system is over 50 years old and the city’s population has rapidly expanded in that time, explained Mario Lopez Perez, who worked in Mexico’s National Water Commission (Conagua) for decades. “The pipes aren’t designed to handle double the capacity of water they used to,” he said.

Experts predict that the flooding will only get worse, as climate change causes more erratic weather patterns – in the month of September alone, Mexico City has seen some of its heaviest rains in the past 20 years. Beyond the flooding damage, the crisis is worsening the city’s sinkage levels, sewage spills and earthquakes.

Rainwater harvesting may not be a long-term solution to flooding, but could offer a needed relief to an overworked, underproducing water system. “They reduce costs just as much for the families as for the government, since, when there’s no water, they have to subsidize pipas and other water delivery methods,” Becarril said.

The relief they provide to individuals and families may not be the golden ticket, however. “[Rainwater harvesting systems] help, but don’t solve the problem,” Lopez Perez said. The ex-official points to more complicated approaches, such as better urban planning, and looking for more natural water sources, to keep future generations from going without.

But for today, Lopez Perez asks, “What am I supposed to wash my hands with, if I don’t have anything?”