The formation of a historic coalition government has put climate action at the top of Ireland’s priorities, with a plan to halve emissions in the next decade 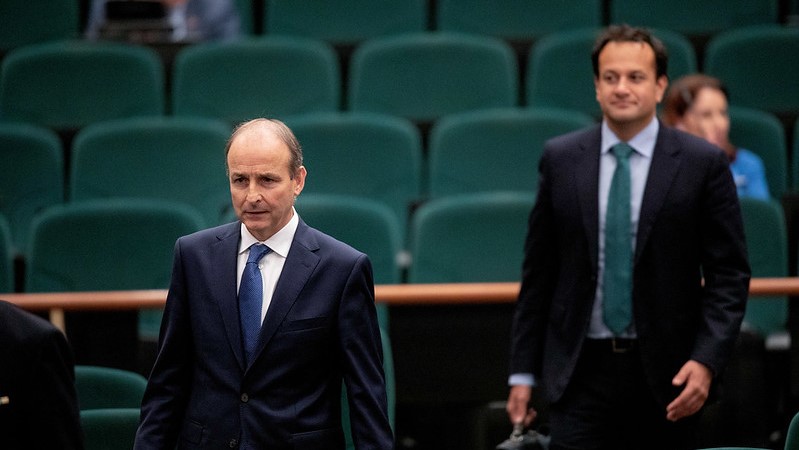 Following months of negotiations, interrupted and delayed by the coronavirus pandemic, a three-party coalition government was confirmed on Saturday. No single party won a majority in a general election in February.

The unusual alliance of the Republican party Fianna Fáil, the more liberal Fine Gael party and the Green Party was endorsed by party members, delivering a mandate for Ireland to set tough short-term emissions reduction goals alongside addressing the country’s housing crisis.

Under the coalition agreement, the three parties committed to reduce the country’s greenhouse gas emissions by an average 7% per year, adding up to 51% by 2030. They promised to enshrine in law a target to reach net zero emissions by 2050, in the government’s first 100 days in office, and deliver a “green” economic recovery to the Covid-19 crisis.

The Climate Action bill will define economy-wide five-year carbon budgets and set a cap on how much each sector can emit. Under the plan, every minister will make climate action “a core pillar of their new departmental strategies”, which will be produced by the end of the year.

Joseph Curtin, a member of Ireland’s Climate Change Advisory Council, described the new climate targets as “extremely ambitious”, adding they “compared favourably with anything on the table at the EU level or globally”.

Before the coronavirus pandemic, the fastest rate of national emissions reduction achieved by an advanced economy was about 3% per year in the UK over the past decade, and in France from the mid-1970s to mid-1980s, when dozens of nuclear power plants came on line, he told Climate Home News.

In setting the initial carbon budget for the next five years, the coalition pledged to “incorporate measures which initiate significant change”. However it noted their impact may only be felt from 2026, the start of the second carbon budget period when the government hopes to achieve the average 7% annual emissions cuts.

Such policies include banning new oil and gas drilling and scrapping plans to develop an LNG terminal in Shannon, western Ireland, for gas imports from the US.

The coalition wants renewables to deliver at least 70% of electricity by 2030, with plans to add 5GW of offshore wind capacity in the next 10 years and develop floating wind turbines in Ireland’s deeper Atlantic waters.

Carbon-cutting measures to meet the annual emissions reduction goal include retrofitting 500,000 homes for energy efficiency over the decade, accelerating the electrification of transport and ban the registration of new petrol and diesel cars from 2030.

If delivered in full, the coalition’s programme “will help Ireland catch up,” he said. Steep annual emissions cuts and year-on-year monitoring will provide “a clear direction of travel” that can spur action from businesses and “build trust” in the plan’s credibility, Palmer said, adding it could become “a standard for others to follow”.

Palmer regretted the lack of more measures to tackle emissions from the agricultural sector – a hot potato in Irish politics – and the absence of exit dates for coal and peat burning.

Sustained action could be achieved if delivered in a way that “draws people in” and “unites communities” beyond generational and rural-urban divides, he added.

For Curtin, the Irish government DNA will need to be transformed away from “an administrative system that is wedded to the status quo” in order to deliver on the plan.

The power-sharing deal will sea Fianna Fáil leader Micheál Martin become prime minister – or Taoiseach – until December 2022, when he is due to hand over to Fine Gael leader Leo Varadkar.

A new mega-department that merges the ministries of transport and climate action will be overseen by Green leader Ryan – a positive step forward in the government’s ability to deliver on its promises, Curtin said.

“[Ryan] is a talented, pragmatic and experienced politician who understands how to generate change from within the administrative system. He will require all of these political skills to achieve the ambitious vision set out in the government’s programme,” he said.