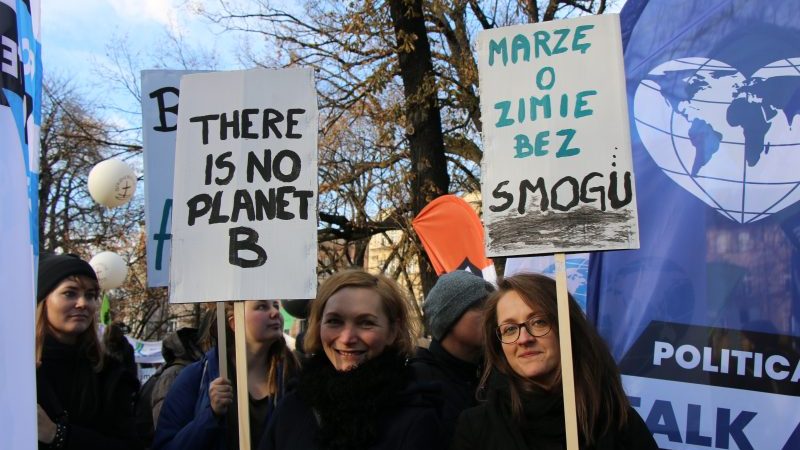 Justine and Marta came from Krakow for the climate march in Katowice. The right-hand sign says "I dream of a winter without smog" (Pic: Soila Apparicio)

It was a long and emotional plenary meeting to mark the halfway point in a fortnight of negotiations.

Four big oil and gas producers blocked the UN climate talks from welcoming the most influential climate science report in years – and met backlash from a broad range of poor, developing and rich countries. The battle was over two words: “note” or “welcome”.

Saudi Arabia, the US, Kuwait and Russia wanted the final statement to merely “note” the UN science report on the effects of 1.5C rise in the global temperature. But a call that started with the alliance of small island states pushed to “welcome” the findings.

The plenary chair’s attempt to find a compromise fell flat, setting the scene for a big political fight when ministers arrive in Katowice next week.

And that wasn’t the only moment of drama on Saturday. Earlier in the day, Africa stood firm as UN officials tried to finalise a draft of the rules that will govern the Paris Agreement. “You can’t bully Africa, it’s 54 countries,” one negotiator said.

The change will mean new proposals could come next week.

A few hundred people marched through Katowice to show their support for climate action on Saturday.

The demonstration stayed upbeat in the face of a menacing police presence, tooled up with riot shields, tear gas canisters and even a water cannon in case of trouble. As things wrapped up, one marcher sent a picture of a wall of police surrounding a few protesters on the ground.

I really can’t emphasise enough how intense the police presence at #marchCOP24 is – so much tension in the air and such a different spirit to the event last year at #COP23#COP24Katowice #PeoplePower #ClimateStrike pic.twitter.com/j9ZIEwQSQR

As countries huddled and fought over the most important UN science report in years, UN climate chief Patricia Espinosa took a phone call and was picked up on a live microphone. The caller? Her mum.

During tense moment at UN talks in Katowice as countries fight on the floor over the major UN science report of the year, UNFCCC chief @PEspinosaC calls her mum and is picked up on the podium microphone: "Bueno mama, Bueno mama."

It was tame compared to the scenes in Paris, where at least 55 people were injured and 700 arrested, according to the authorities, as cited in various news reports.

“Yellow vests” dotted climate marches across France under the slogan “End of the month, end of the world, same fight”.

The merged agenda followed a call from more than 290 French people, including trade-unionists, academics, politicians and artists, to pursue climate action in a more socially just way.

French paleoclimatologist Valérie Masson-Delmotte had urged French senators months ago to open up the conversation on climate change to the rest of society, she told Climate Home News.

She spoke as one of the co-chairs of a landmark report on 1.5C global warming, which concluded that public consultations could speed up climate action. But senators felt “powerless” in the face of the scale of changes required, she said.

At least 12 climate activists due to attend Cop24 were denied entry at the Polish border or deported, Climate Action Network (Can) claimed on Friday. Can put it down to Poland’s anti-terror legislation voted ahead of Cop24, which empowers authorities to detain “persons posing a threat to public safety”.

The head of the Cop24 Polish presidency, Michał Kurtyka, said that they were on the case and committed “to allow everybody who wishes to engage constructively in this discussion, of course, to be part of it”.

A number of Latin American and Caribbean countries have flagged interest in hosting the 2019 climate summit, after Brazil dropped out a couple of weeks ago – including Costa Rica, Chile and Guatemala.

The problem is money, the UN’s climate chief Patricia Espinosa, a former Mexican diplomat, told reporters on Saturday. “Financing of the conference is a challenge, because of the size. It’s really a huge endeavour, and that is what has prevented some final decisions regarding the candidacy.”

In the absence of a host country, the annual summit would be held at the UN Climate Change headquarters in Bonn, Germany – the site of last year’s event, presided over by Fiji. But it would be a big ask for the German government, which largely funded Cop23 and has signalled it can’t do it every year, Espinosa said.

“We’re still hopeful that, with the support of the international community, it can be held in Latin America and the Caribbean,” she said, expressing hope the decision can be made by the end of Cop24, next week.

To ramp up the pressure for climate action, WWF is replacing its panda logo with the faces of human beings for the duration of the UN summit.