Ministers from China, Brazil, South Africa and India want to see more action from the rich world, in a critical year for writing the rules of the Paris Agreement 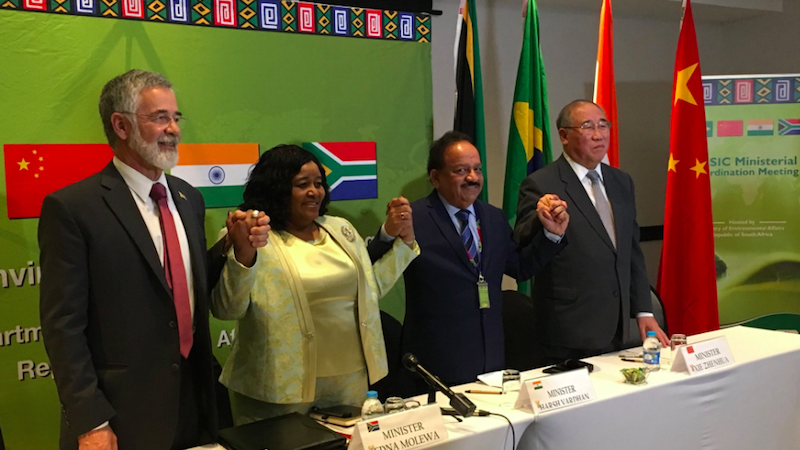 The biggest future carbon emitters continue to raise the heat on the polluters of the past.

Environment ministers from China, South Africa, Brazil and India met in Durban over the weekend to solidify their cooperation in a year they hope to gain concessions from wealthy countries on the rules of the Paris Agreement.

This is a critical year for the UN climate process. Three years on from the summit in Paris, the rules that will govern the deal remain unwritten and hotly contested.

Brazil, South Africa, India and China, together known by the acronym Basic, account for roughly two thirds of global coal consumption. As middle income countries, they are hit hardest by the blurring of the distinction between developed and developing countries that was engineered into the Paris Agreement.

After meeting this weekend, ministers “urged developed countries to take the lead in emission reductions, achieve the peaking of their emissions as soon as possible if they have not already done so”.

The Basic ministers said they were committed to agreeing a rulebook when countries attend a major climate summit in Poland in December. But they called for developing countries to be granted “flexibility” in the rules that require countries to openly report their efforts to cut carbon under the Paris deal and also called on rich countries to improve their own systems of reporting.

E3G senior policy advisor Camilla Born said: “They are saying that all need to step up; it’s not just developing countries catching up.”

Slow-moving talks last month in Bonn led countries to schedule an emergency interim meeting for Bangkok in September. The Basic ministers said the Bangkok meeting needed to produce a “negotiating text” to serve as the basis for discussions in Poland.

They also noted efforts to help the poor world adapt to the impacts of climate change were lagging behind. Climate change is already destroying lives and livelihoods. This needed an “urgent global response”, said the ministers. They called for rich countries to report more openly how they were funding adaptation around the world.

Born said the current approach to dealing with the impacts of climate change was “comparably underdeveloped”, which “could introduce a challenging dynamic into the Poland talks”.

“While countries of course need to talk about cutting carbon, developing countries are saying, hang on, how about helping to deal with the climate impacts that are happening now,” she said.

Report: Eyes on ministers to intervene as UN climate talks get mired in old battles

In a joint statement the Basic ministers said wealthy nations have failed to meet their pre-Paris deal commitments on cutting their carbon emissions and building up financial flows to help poor countries before 2020.

In 2017, UN Environment reported that countries’ pre-2020 targets were not ambitious enough and would make it harder to keep the world from warming more than 2C.

“Ministers noted with concern the significant gaps in pre-2020 climate efforts,” said the ministers, and “stressed that these gaps should not be transferred to the post-2020 period and present an additional burden to developing countries”.

There was also a note in the statement noting “deepest concern” over what they said were attempts by wealthy countries to change the way the UN Green Climate Fund decides how to divide its funding. Last year, the UK board member vetoed two projects in South America, saying that middle income countries should be subject to stricter requirements.

“Such attempts are tantamount to renegotiating the Paris Agreement and potentially undermine the level of ambition of developing countries in the global effort against climate change,” said the ministerial statement on Sunday.

The meeting was attended by Polish minister Michał Kurtyka, who will preside over the December talks. E3G’s Born said this was a “good sign” the Poles were getting organised to host the pivotal talks.

Representing China was lead envoy Xie Zhenhua. The continued role of the veteran negotiator has been in doubt since China’s government incorporated climate diplomacy into an expanded environment ministry.