Dodgy credits allow exporters to ship the valuable timber overseas, to unsuspecting consumers who are unaware the timber may be illegal 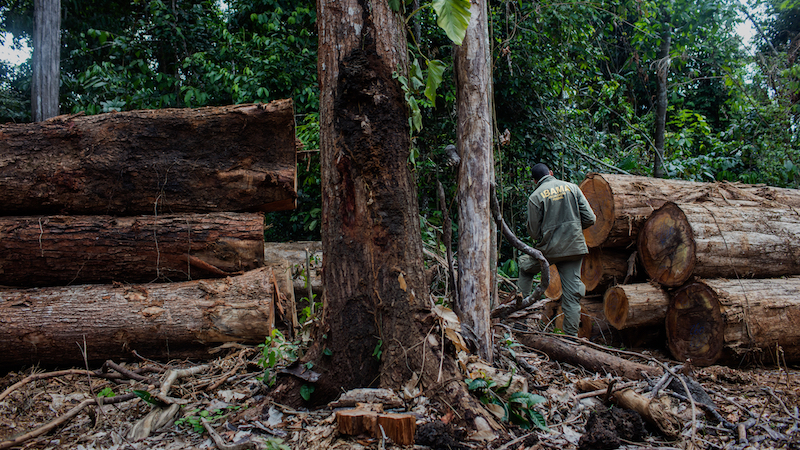 From a legal point of view, it’s all clear. The paperwork assures companies that the Brazilian ipe wood, exported mostly to US and European markets, has followed all the correct steps, from tree logging to its shipping.

But a joint investigation by Greenpeace and Ibama, the country’s environmental agency, has found that the permits hide a trail of fakery fuelling the destruction of the Amazon.

In a report published on Tuesday, Greenpeace argues that fraud is so widespread in the Brazilian Amazon’s lumber industry that it has become virtually impossible to separate legally from illegally logged timber.

The investigation analysed 586 Logging authorisations (Autefs, in the Brazilian acronym) granted by the State of Pará between 2013 and 2017. In 76.7% of them, Greenpeace found they showed a higher density of standing Ipe trees than scientific research has shown to be typical. That means the quantity was likely overstated in order to generate false credits – the so-called imaginary trees.

These false credits are then used to launder ipe trees stolen from indigenous lands and other protected areas. In the most extreme case, Ibama did not find any of the 283.53m³ of Ipe credits (about 10 trees) registered at one private property. The timber is commonly used as decking in construction around the world.

A further investigation discovered that these credits had been transferred to a company in the city of Santarém, which then used most of them to export Ipe wood to Europe.

One of the main loopholes of the licensing system is that there is little, if any oversight of information about forest management areas. That allows forest engineers to overestimate the amount of Ipe and other valuable wood.

“State agencies subsequently issue credits for the harvesting and movement of this non-existent timber. These credits are then used to ‘cook the books’ of sawmills that are processing trees illegally logged from forests on indigenous lands, protected areas or public lands,” explains the report.

According to Greenpeace, the US is, by far, the biggest importer of the tainted Ipe wood, followed by France and Portugal. The NGO said consumers should suspend purchase from Brazilian wood, as there was no guarantee of its legal origin.

“In order to avoid the irreparable loss of species with high commercial value and the biodiversity associated with them and, more generally, to avoid the degradation caused by illegal logging, with all its negative impacts on forest biodiversity and local communities as well as broader climate impacts – it is important that the production, harvesting and trading of timber are halted until the current problems in the licensing and control systems are addressed,” says the report.

This reporter contacted the state of Pará’s department of environment, which is responsible for the licensing, but it declined to comment on the report.