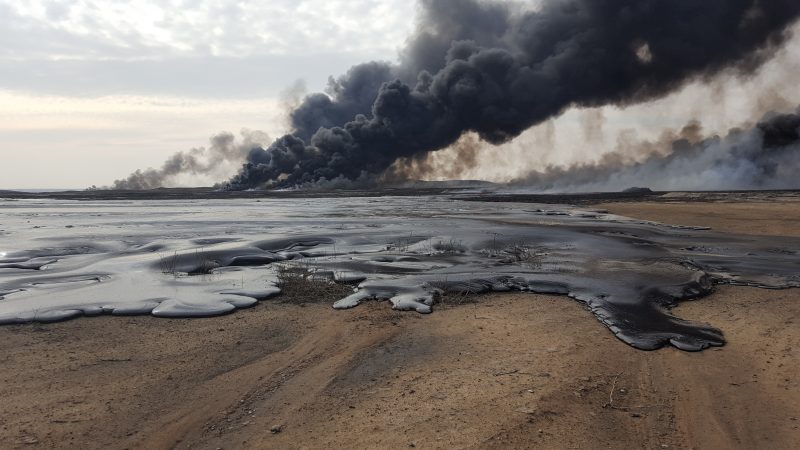 Following the recapture of Mosul last month, US defence chief Jim Mattis visited Iraq on Tuesday. The next battleground is Tal Afar, some 50 kilometres to the west.

Five oil fires (photographed below in 2015 and 2017) have been blazing since August 2015 to the east of Baiji oil refinery. Several more in the Qayyarah oil field, south of Mosul, burned for eight months before firefighters extinguished them in March. 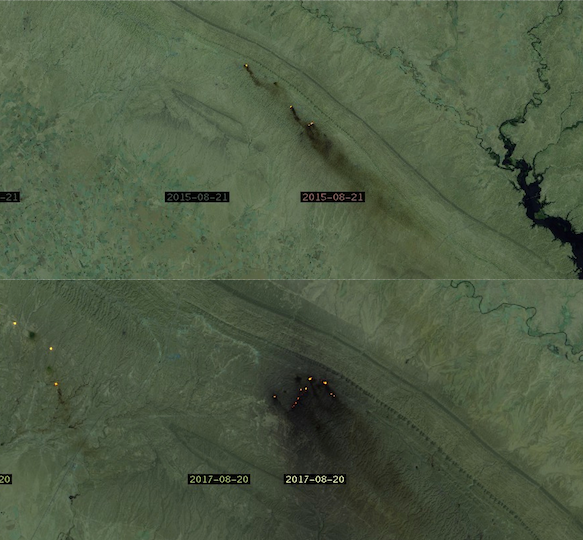 The scene recalls the first Gulf War in 1991, when more than 600 oil wells in Kuwait were set alight. Subsequent analysis estimated that conflagration released 133 million tonnes of carbon dioxide into the air. That is more than a year’s worth of CO2 emissions for a medium-sized country such as the Philippines, Belgium or Nigeria.

Meanwhile sulphur dioxide emissions from Al-Mishraq sulphur mine, torched last October, were bigger than those from any volcanic eruption in 2016, according to NASA. 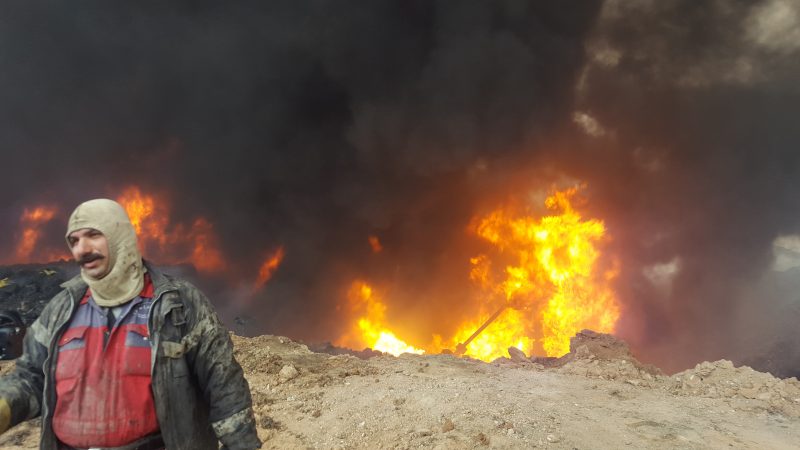 Wim Zwijnenburg from Dutch NGO Pax, who just returned from a trip to the oil fields near Mosul, warns that this environmental damage brings an untold health cost to the area’s inhabitants.

“All these people are concerned about their health because they are being covered in soot. People are complaining about a lot of respiratory issues because of the oil fires,” he told Climate Home.

“It is a warzone, so there is a lot of trauma care need for people affected by the conflict. Traditionally, environmental health risks tend to get low priority, which is to some extent understandable. But the downside is that it has never been picked up or properly researched.” 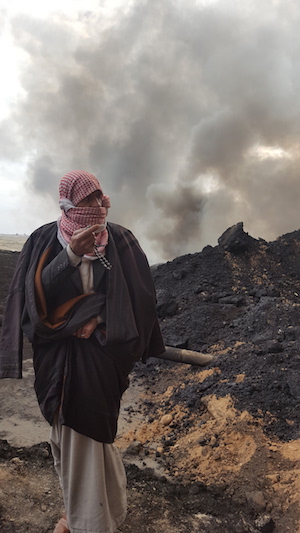 Zwijnenburg’s photos, shared with Climate Home, show the scale of the destruction on the ground at Qayyarah oil field.

Pax is calling for environmental remediation to be incorporated into reconstruction efforts. That means boosting governance of the oil industry as it restarts production, to crack down on polluting practices, as well as putting out fires.

The Kuwait oil fires focused international attention on how to mitigate the environmental impact of war, but it has proved a sensitive issue.

“You can’t always establish who is responsible for damage during an armed conflict,” explained Marie Jacobsson, a Swedish lawyer who until last year led the International Law Commission’s work on environmental protection in relation to armed conflicts. “The actions you may have taken as a combatant may have been perfectly legal at the time you did them, and then who is responsible for the consequences?”

Rather than try to apportion blame, the legal effort has focused on promoting cooperation to rehabilitate conflict zones. Jacobsson said: “You need solutions. States should have a responsibility to share information so they can assist each other in managing problems like this.”