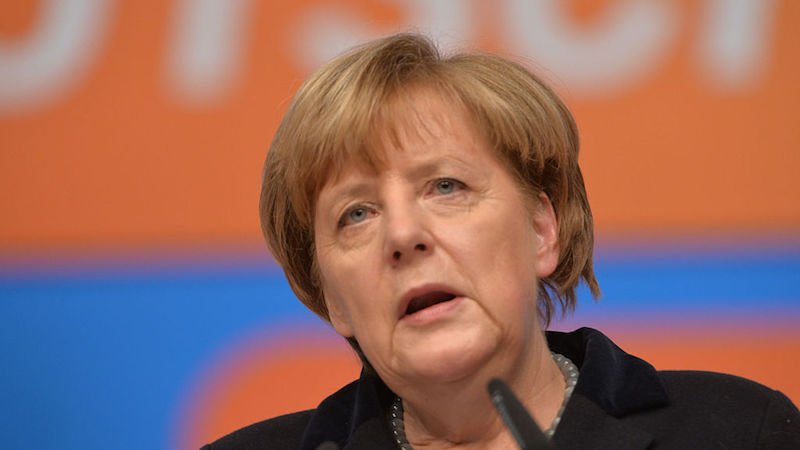 German chancellor Angela Merkel has said she will confront the US president over climate change, but in negotiations Germany made huge concessions to keep him onside (Photo: Olaf Kosinsky)

German chancellor Angela Merkel has said she will go to the floor with Trump over climate change at next week’s G20 meeting in Hamburg.

But documents exclusively leaked to Climate Home show just how far Germany was prepared to bend in the months before president Donald Trump announced his decision to withdraw the US from the Paris Agreement, in order to keep him on board.

Ahead of the summit, the German hosts have been working on a climate action plan, Arthur Neslen reports. But between March and May, they gutted the draft of ambitious language and opened the door for some fossil fuels, possibly even some coal projects, to be treated as “clean” energy.

Since their diplomatic efforts failed, it remains to be seen whether Germany will stick with the watered-down report, produce a stronger version to be agreed by the G19 (without the US) or abandon the initiative altogether.

How green is Modi’s India, really?

It was all smiles and hugs when Narendra Modi met Donald Trump on Monday. Their divergent positions on climate change did not come up.

When talking to other audiences prior to the state visit, their differences were clear. Trump accused India of rent-seeking. Modi promised to go “above and beyond” the Paris climate deal that the US is quitting.

But how deep does Modi’s climate conviction actually run?

In an essential long read, Aditi Roy Ghatak looks past the solar hype to Modi’s close relationship with the coal-pushing Adani family. In its friendliness to business, the Modi administration has slashed environmental protections and cracked down on critics, she writes.

0.01% – the proportion of industrial projects in Modi’s India rejected due to their impact on wildlife

India has done little to cause global warming, historically, but is vulnerable to many of the effects. Many campaigners see flows of green cash to developing countries – which Trump is choking off – as “climate justice”.

Focus groups run by UK-based Climate Outreach found that phrase means little to ordinary Indians, however. As Kavitha Rao reports, participants preferred to think of India solving its own problems, the majority agreeing with the statement: “We cannot wait for help to arrive from the West; India is in the unique position to be the first emerging economy to take action.”

To build support for clean energy, the communications experts recommended presenting renewables as “jugaad”, an Indian term for frugal innovation.

Is there anything “jugaad” about a coal mine that needs big public subsidies to be viable? That is what Adani is pursuing in Australia.

In the latest installment of a long-running controversy, a UN committee has encouraged the Australian government to review its support for new coal mines.

As a public infrastructure fund considers a $1 billion loan to build a railway supplying the proposed Carmichael mine, the Committee on Economic, Social and Cultural Rights warned coal expansion would contribute to dangerous climate change.

Trump’s attempt to reverse the decline of coal mining in the US is doing workers no favours, write Oliver Sartor and Andrzej Błachowicz. Looking at various examples from Europe, they argue that failure to plan for the end of coal hurts miners most.

It struck a chord on Reddit’s futurology discussion thread, prompting many people to share their stories. “People don’t want to admit that their heritage and their past is basically becoming obsolete,” reflected NotADarkLord, the descendant of two generations of miners in Kentucky.

Praise for China’s carbon market is premature, warns Emil Dimantchev. It may be big, but it is too early to say if it will be effective – and the administration’s opacity is a cause for concern.

An estimated 20 people have been killed in rumbling conflict over land in Laikipia County, Kenya, reports Mantoe Phakathi.

Politicians are accused of stoking racial tensions to win support for the general election on 8 August.

The UN’s flagship Green Climate Fund has been urged to take a wider view of what adapting to climate change means, ahead of a board meeting next week.

In the past year, bids from Bangladesh and Ethiopia failed to win approval in part because they looked too much like traditional development projects.

More than 80 NGOs said in a letter that the distinction between adaptation and development was “largely artificial”.