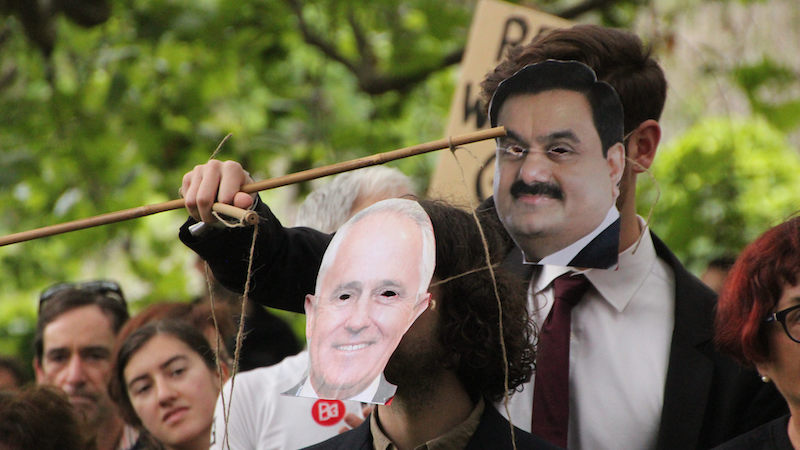 The Committee on Economic, Social and Cultural Rights (CESCR), which reports to the UN high commissioner on human rights Zeid Ra’ad Al Hussein, said Australia’s increasing carbon footprint was “at risk of worsening in the coming years” undermining the country’s pledges to the Paris climate agreement.

In a periodic review of Australia’s performance under a UN treaty on human rights, released this week, the committee noted: “environmental protection has decreased in recent years as shown by the repeal of the Emissions Trading Scheme in 2013, and the State party’s ongoing support to new coal mines and coal-fired power stations”.

In light of this, the committee of 18 international human rights experts encouraged Australia to “review its position in support of coal mines and coal export”.

The Australian government has remained a staunch supporter of the proposed Carmichael mine project, coal from which will generate more carbon emissions than New York City each year it operates.

On a trip to India in April, prime minister Malcolm Turnbull claimed the project would create “tens of thousands of jobs” for Australians – a claim that has been discredited by Adani’s own experts and a Queensland court.

A government infrastructure fund is weighing an application for a near-$1bn loan to Adani for a railway to transport the coal to the coast.

Australian ministers have often argued the Adani mine is backed by a “moral case” for supplying Indians with cheap electricity. The experts on the CESCR are elected by state parties based on their “high moral character”. They include an Indian representative.

The UN recognises that climate change is a threat to human rights. Coal mining and other highly-polluting industries could therefore be viewed as contravening international treaty obligations.

During the review process, which occurred last month, the chair of the committee Waleed Sadi told Australian officials that the recent decision of the US president Donald Trump to withdraw from the Paris Agreement meant the actions of wealthy countries such as Australia had a broad impact beyond their national borders.

A recent review of the energy system by Australia’s chief scientist recommended the government establish a “clean energy target”. But the concept has been shown to be politically compromised and may be expanded to encourage high-efficiency coal power alongside renewables.

The committee also raised concerns over the disproportionate impact of climate change on Australia’s Aboriginal population and called for the government to engage indigenous peoples when designing policy. The Adani mine is opposed by some indigenous landowners.

In the last review of Australia’s obligations to the covenant in 2009, the committee raised issues over domestic emissions and indigenous peoples, but this was the first time coal mining was singled out.