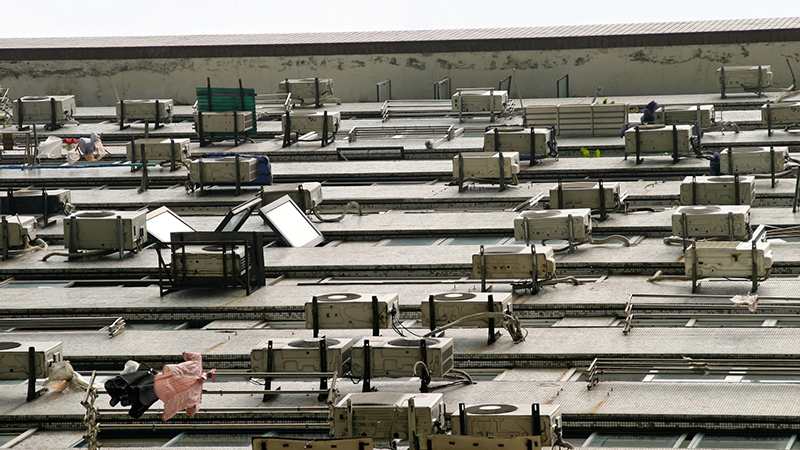 By Huizhong Wu in New Delhi

Everything is a quadrangle in Daikin India’s manufacturing facility. Its clean straight lines are at odds with the dusty and sprawling landscape outside the facility, 120km from India’s capital.

It is 37C outside, unbearable for many in the Western hemisphere, but about the norm for Rajasthan, in western India. Here temperatures reach up to 50C. Across the country, people live in conditions where temperatures are above 24C more than half of the year.

As India’s population of 1.3 billion grows richer, they will want access to cool air.

Only 4% of Indians have access to air conditioning today, but that number is rising fast. Between 2003 and 2013, The Indian Refrigeration and Air-conditioning Manufacturers’ Association recorded a 20% annual growth rate. This makes the Indian market absolutely pivotal in the years to come for businesses, and also pivotal for the environment as hundreds of million of people will buy their first air conditioner.

AC is a driver of climate change for two reasons: it uses a lot of electricity, mostly generated by coal in India, and the widely used coolant chemicals hydrofluorocarbons (HFCs) are themselves potent warming gases.

A global deal to phase down HFC production agreed in Kigali in October 2016 is expected to avert up to 0.5C of warming. Its implementation depends on manufacturers like Daikin.

Researchers estimate that using only less-polluting coolants and energy efficient kit in 2030 would prevent roughly twice the amount of emissions saved by India’s 100GW solar target. It would reduce the number of power stations needed to meet peak electricity demand, the US-backed analysis from Lawrence Berkeley National Laboratory explains.

India led hard negotiations in Kigali, citing economic concerns. “The high rate of growth in different sectors using ACs was on top of our mind and this was pushed very hard in negotiations,” said Manoj Kumar Singh, joint secretary in the Ministry of Environment, Forests and Climate Change.

But ultimately India signed as “the group also accepted that India’s situation is different” and made provisions for the country to have a later deadline than others who were more developed. Under the revisions, India will freeze its usage levels of hydrofluorocarbons (HFC) in 2028 and reduce this 85% by 2047.

Eight months after signing the Kigali amendment to the Montreal Protocol, India is working towards meeting the expectations of the treaty and reducing its carbon footprint.

In the short term, this means switching from one HFC blend to a less polluting variant. The industry standard used to be R-410A, a gas with roughly 2100 times the global warming potential (GWP) of carbon dioxide. For the preferred alternative, R-32, the figure is 675 times.

The government is a main driver of this change. To promote economies of scale on ACs that use R-32, the power ministry has put out a bid for companies to supply ACs for 200,000 ATMs across the country.

On the side of private industry, market forces and industry research are driving the change.

There is a lot of industry movement moving towards using medium-GWP coolants such as R-32, said Karan Mangotra, a fellow with The Energy and Resources Institute. That’s in part being driven by the Indian Bureau of Energy Efficiency’s five-star labeling system, which gives every AC unit a rating between one and five stars based on its energy efficiency. Consumers are more likely to purchase the energy efficient ones, driving the companies to produce more efficient products as a result.

Daikin was the first to sell ACs using R-32 in India in 2015. Two years later, said Gaurav Mehtani, a divisional manager with Daikin India., all their competitors are trying to catch up by switching to using the lower emissions coolant.

“We are ready with the Kigali agreement,” said Mehtani. “Though the amendment will start in 2028, in 2017 we are ready to meet the demand of India.”

“Indian industry, they have been in it right from the start, because AC is an industry that people have been there for quite some time, they’ve seen [many] phasedowns, so they’re very well equipped to handle all of that,” said Mangotra. While there’s still a lot of uncertainty, “there is enough pressure now on the Indian industry.”

The challenge, as more and more Indians are able to afford ACs, will be for companies to create even more efficient machines and for domestic researchers to come up with further less-polluting coolants. US-headquartered multinationals have a headstart on intellectual property in the sector.

With the longer term in mind, the environment ministry had announced a research and development platform prior to the Kigali amendment to encourage homemade innovation in research on coolants and energy efficiency technologies, bypassing any patent problems that may arise for its domestic manufacturers.