Trump-era climate resistance, from a beachside in Rhode Island 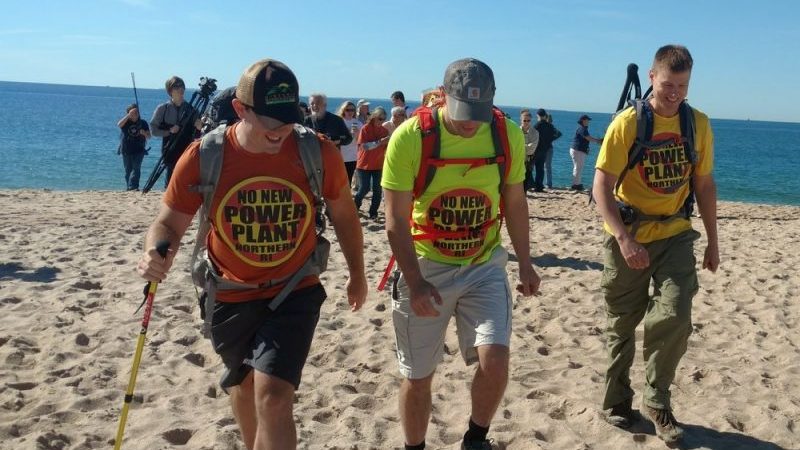 By Megan Darby in Charlestown, RI

At 8am on a sunny Sunday in June, around 40 people are gathered at a beachside carpark in Charlestown, in the US state of Rhode Island.

These early risers have come to show their opposition to a gas power station planned for Burrillville, on the inland edge of the ‘Ocean State’. In a low-key, congenial protest, three men from Burrillville are setting off on a three-day, 78-mile hike along the wooded North-South trail that links the two communities.

The campaigners say Invenergy’s Clear River Energy Centre – the 900MW plant in question – will blow Rhode Island’s carbon budget, and only community pressure can stop it.

Since US president Donald Trump nixed federal action on climate change in order to go all out for American coal, oil and gas, local resistance like this has taken on a national dimension. In the absence of a federal plan to shift from dirty to clean energy, states are now stepping forward to claim leadership.

Rhode Island was one of 12 states to sign up to the US Climate Alliance after Trump declared his intention on 1 June to pull the country out of the Paris Agreement. A further ten states have subsequently aligned with the pact’s pledge to uphold the US’ commitments to the deal. Collectively, they account for 40% of US greenhouse gas emissions.

But realising state-level targets depends on decisions about fossil fuel infrastructure, which often face local opposition based on local concerns. With a vacuum at the top, the US contribution to global carbon-cutting efforts is set to play out through a thousand more community battles.

History shows that the cumulative effect of these small movements that often fail to grab national headlines is nonetheless significant. The Sierra Club’s Beyond Coal campaign, which builds coalitions of community actors to oppose new developments, has blocked construction of 189 proposed coal plants. Along with lobbying for clean energy support and retirement of old coal plants, this has contributed to a cut in annual CO2 emissions from the US electricity sector of 538 million tonnes over the past decade – that’s five times the decadal emissions of Rhode Island.

“Caring about climate is not just for the activists, it is not just for the liberal professors and scientists, it is for average, ordinary citizens,” Jason Olkowski, Burrillville resident and MC for the event, tells Climate Home. “If the ordinary citizens don’t get involved, the vested interests that want to preserve the status quo, they will win.” 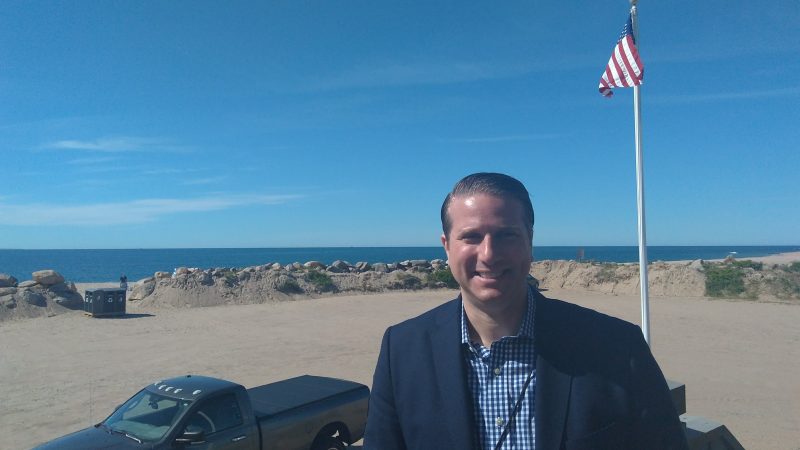 Local activism is less entrenched along party and ideological lines than the national politics of climate change. A believer in small government and fiscal conservatism – Republican values – Olkowski is not your typical eco-warrior. When Invenergy announced the project in August 2015, he was inclined to give them a hearing and sceptical of groups waving homemade protest placards.

“Some of these environmental activists began to come up and at first, we didn’t really pay any attention to them. We thought ‘oh, they oppose all stuff like this’. But they were trying really hard to engage the community, so we started to listen,” he says.

Local factors allowed Keep RI Beautiful to take off, transcending partisan politics. The small town of 16,000 people already has a gas power plant and compressor station. The prospect of razing 200 acres of trees for another major bit of infrastructure caused consternation.

Olkowski’s wife was raised in Burrillville, catching frogs in the wetland and hiking the forests with her brothers. They moved back as a family to give the same kind of upbringing to their daughters – who, he apologises, could not be mustered out of bed in time to attend the morning’s demo.

The Clear River development threatened that way of life. And the more he learned, the more Olkowski became convinced it was both damaging and unnecessary.

As a Republican voter turned independent, Olkowski says with understatement he was “disappointed” by Trump’s decision to withdraw from the Paris pact. As VP at a multinational software company, he sees the move to a green economy as the next technological revolution – not the job-killer Trump claims. In his professional life, he has seen attitudes from overseas colleagues towards US citizens hardening as a result of Trump’s position.

“Unfortunately, my party has been hijacked by special interests, by the fossil fuel industry,” he says. “I am hopeful that people will wake up to that. Until something like this happens to you and you have a connection to it, you don’t really understand all the factors.”

Opposition to the plant is having an impact. The development had looked like a slam dunk when Invenergy boss Michael Polsky launched the project flanked by state governor Gina Raimondo – a Democrat – and trade unions.

But after a series of public hearings and legal challenges, the developer was forced to change its water supply arrangements, delaying the project and increasing costs.

Further hearings are scheduled before the state’s Energy Facility Siting Board will decide whether to grant a permit, no sooner than early 2018. Whichever way the decision goes, an appeal is likely to follow. Meanwhile, a lawsuit is pending against the revised water plan.

The case for the plant focuses on jobs and cheaper electricity. The case against highlights natural beauty under threat. A glance at social media shows which has best captured the public imagination.

A Facebook post for Keep Rhode Island Beautiful detailing the campsites, water resources and protected areas surrounding the proposed power plant site has been shared more than 1,000 times. “This is wrong and unnecessary! A gorgeous area will be irreparably destroyed and for no reason. Please keep sharing and saying NO!” writes Patty Griffin below the post.

Posts on Clear River Energy Centre’s page attract a smattering of – overwhelmingly negative – attention, in contrast. “Your company is not welcome here,” is one of the politer comments, from a Susan Lavallee.

Defence of the project mainly falls to those with an interest in it. Rhode Islanders for Affordable Energy, a coalition of trade unions and industry groups supporting the plant, is transparently funded by the developer. “Paid for by Clear River Energy Center, LLC,” says a note at the side of the website.

Climate change is not the primary driver for either side, but it is what elevates this parochial matter to international relevance. And both camps claim the moral high ground.

Advocates argue Clear River will be more efficient than the old generators it displaces across New England, the six-state region that shares a power transmission network. Inverenergy’s analysis says it will bring carbon emissions across the region down by 1% per year.

By framing this as a New England-wide problem, they sidestep the inconvenient matter of Rhode Island’s emissions target. The Resilient Rhode Island Act, passed in 2014 under Chafee’s governorship, commits the state to cutting emissions from within its borders 85% below 1990 levels by 2050, with interim targets.

Timmons Roberts, a sociologist at Brown University involved in drafting the legislation, was blunt in his written testimony to the body responsible for the permit decision. Building this plant “would make it impossible” for the state to meet those goals, he says.

A shift to natural gas from dirtier coal and diesel fuel has cut the region’s emissions to date. But to sustain that trajectory, he advises, cleaner technology is needed.

On a clear morning in Charlestown, like the one that greeted the small protest this month, the US’ first offshore wind farm is just about visible on the far side of Block Island. Those five turbines are the way of the future, says Roberts at the beachside gathering.

Roberts – Climate Home’s ride to the event – regularly takes groups of students to UN climate talks. In the spirit of “think global, act local,” he tells the community activists: “These local struggles against fossil fuel infrastructure are extremely important.” 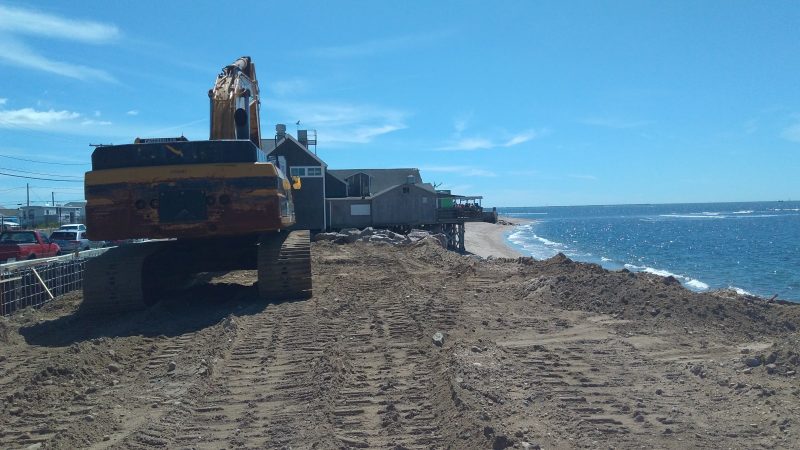 By hiking from the coast, the demonstrators are forging solidarity with a part of the state that is vulnerable to the impacts of climate change.

The northeast US is a hotspot for sea level rise. Tide gauges at Newport and Providence recorded roughly double the global average rate last century. Land subsidence and a weakening Gulf stream heighten the effect of melting ice caps and warming waters.

In Charlestown, the homes are on stilts, as a precaution against coastal storm surges. But an elevation that historically kept residents out of harm’s way may not be enough to escape future extreme weather damage, when high winds meet rising seas.

A few miles down the coast at Matunuck Beach, a seawall is being built to protect the only road from coastal erosion. The rate of coastal erosion is expected to double within 50 years. In the other direction, a salt marsh is struggling to keep pace with the encroaching ocean, the subject of a pilot restoration project.

“This is a fragile area and we just can’t be pumping more CO2 into the air,” says former governor Chafee, who tells local journalist Tim Faulkner he’s considering another run for office.

Sea level rise is only accelerating. The National Oceanic and Atmospheric Administration forecasts the water could come up to 3.5 metres higher in the region by 2100. That worst-case scenario is based on unchecked emissions; curbing greenhouse gases reduces the risk of drastic changes to the coastline.

One gas power plant may make a negligible difference to the trajectory, but the connection is not lost on the community’s representatives.

“When you look at projected sea level rise, it has a huge impact on this town,” says Julie Carroccia, a member of Charlestown council out to show solidarity with Burrillville. “All politics are local. We have to support each other.”