News of record-low solar prices in India – celebrated as a victory for renewable energy over coal – masks a brittle and unsustainable industry, utterly dependent on China, solar power developers and analysts have told Climate Home.

In May, Acme Solar, a leading Indian solar power company, won the tender for a 200MW project at a solar park in Rajasthan bidding Rs 2.44/kWh (US$0.04), an all-time low. This smashed the previous record of Rs 3.15, set just a month before.

Government officials point out that the current price of solar is lower than the average price of coal-based power. The average price of power generated by coal-fired plants belonging to India’s largest power utility, the National Thermal Power Corporation, is Rs 3.20/kWh.

Solar still comprises only 1% of the electricity generated in the country, but is the fastest growing source. According to the Central Electricity Authority, solar’s contribution to Indian electricity generation jumped 81% in the 2016-17 financial year, an extraordinary leap in a single year. 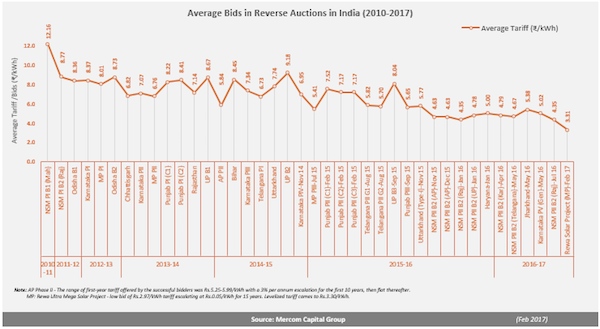 Bids that set solar prices from large farms have fallen by an average of 73% since 2010 in India. A recent auction, not included on this graph, pushed the price down even further to Rs 2.44 (Source: Mercom)

Ambitious renewable energy targets are driving India to add 8.8GW in new solar capacity this year – a further 69% growth. During 2017, India will overtake Japan as the third largest solar market worldwide after China and the US.

However of late, the pace of new tender announcements and completed auctions has slowed significantly, according to analysts Bridge to India. The bidding for new solar tenders is conducted as a “reverse auction”, where sellers of solar power – rather than buyers – bid the lowest prices, which can’t be raised for 25 years. State power corporations – who want access to the cheapest power possible – are waiting and watching to see whether the current auction prices fall further, instead of binding themselves to the current prices.

Adding to the bottleneck, southern states have expanded their solar capacity rapidly and are already much of the way to reaching targets set for 2022.

All this means the prices of large-scale solar are being depressed beyond what is sustainable, said Gyanesh Chaudhary, who heads Vikram Solar, India’s largest maker of solar photo voltaic (SPV) panels.

“This is a race to extinction,” he said. “These bids are unviable. India at one point was a trailblazer at what it was doing. It is one of the top three markets globally in terms of annual generation. It is also giving the world a fright in terms of prices bottoming out.”

Asked how SBG Cleantech was able to make such aggressive bids, beating its own Rs 4.34/kWh, set 18 months ago, executive chairman Manoj Kohli said the most important change in the global solar sector was that the price of solar modules – which are largely manufactured in China – had come down by 35% in 18 months.

“This is a global phenomenon led by China, and has nothing to do with the Indian market specifically. Everyone who is buying from China has benefited,” he said.

“There is so much pent-up demand for large-scale solar projects that developers are willing to sacrifice returns to win projects so that they can utilise their idle staff and resources,” said Prabhu.

“It is a vicious circle,” he said. As solar tariffs have fallen, government agencies in other regions have asked developers to rework their bids to match the new low price, this slows down the process, which in turn creates a glut among developers, so they bid even lower. “And so on.”

Ashwini Kumar, managing director of the state-owned Solar Energy Corporation of India, told Climate Home he wasn’t worried about the falling bids. “There were 27 bidders in the last few auctions for 700-800MW [solar farms] and they had obviously done their arithmetic.”

But Santosh Kamath, partner at consultancy KPMG expressing his personal views, told Climate Home: “If the true cost of manufacture is taken into account, even for Chinese imports, the current bids may not be viable. At present, Chinese panel prices are sold below cost because of the oversupply in the global market.

“In the auctions, bidders have factored in a further fall in panel prices into the next 15-18 months when projects need to be delivered,” he said.

If module prices were to reflect true manufacturing costs, said Kamath, the price developers are bidding would need to be Rs 0.50-60 higher for every kilowatt hour.

The problem of cheap solar panels flooding the market is a difficult one to control from within India. In 2015-2016, India imported $2.34bn worth of cells, of which 84% were from China. India relies on thin-film technologies, which are cheaper, but less efficient that standard silicon cells. Thin-film depends on “rare earth” metals on which China has a near-monopoly.

“China has such an advantage in scale and pricing,” said Mercom’s Prabhu. “They are now by default the solar manufacturers for the world. If you go to Japan, India or the US, [Chinese products] not only dominate but the market depends on those low prices to make a decent return.”

Thus India’s solar developers are subject to the whims of the Chinese government’s currency and export decisions, said Sajal Ghosh and Rohit Prasad from the Management Development Institute (MDI) in a recent article on Live Mint.

“China uses predatory pricing and dumps cheap thin-film solar cells to capture the Indian market in the absence of any anti-dumping duty imposed by India,” the academics said.

In May, Power Minister Piyush Goyal said that the government would promote indigenous manufacture of high quality solar equipment.

But KPMG’s Kamath said the low auction bids were suppressing local industry. “If the government policy intends to support domestic manufacturing, there ought to be some protection like safeguard duties,” he said.

Ghosh and Prasad suggested a different type of auction should be implemented to ensure developers do not regret making overly aggressive bids. A ‘dynamic auction’ is more transparent and allows companies to start higher and work their way down. “This allows market information to become public, and reduces uncertainty for bidders.”

In India’s quest to become a global solar leader, the rapidly declining solar tariffs have been held as an example of the country’s success and emergence as a competitor. But if those tumbling records become a deterrent to would-be bidders, India’s solar revolution may fall victim to its own success.