Each degree of warming thaws India-sized area of permafrost – study 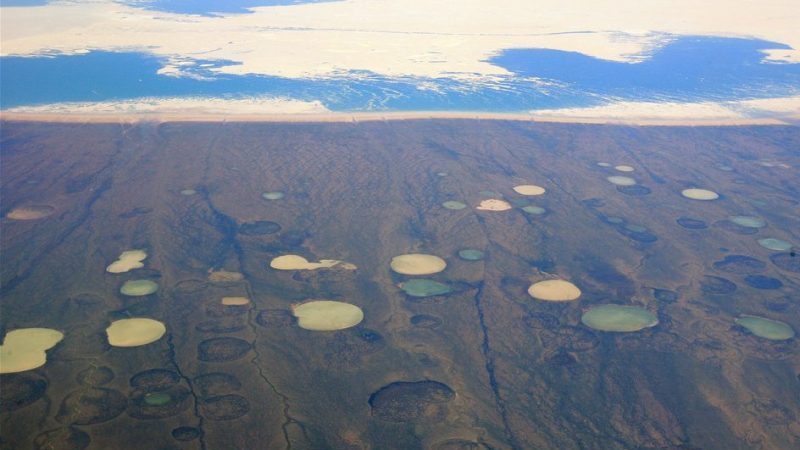 Pools of melted permafrost from the air (Pic: Flickr/Steve Jurvetson)

Permafrost, the layer of permanently frozen ground that lies just beneath the Earth’s surface in the polar regions, has been found to be more sensitive to the effects of global warming than climatology had recognised.

In a study published in Nature Climate Change journal, scientists say they expect the warming to thaw about 20% more permafrost than previously thought, potentially releasing significant amounts of greenhouse gases into the Earth’s atmosphere.

The study, conducted by climate change experts from the universities of Leeds and Exeter and the Met Office, all in the UK, and the universities of Stockholm and Oslo, suggests that nearly four million square kilometres of frozen soil – an area larger than India – could be lost for every additional degree of global warming the planet experiences.

Permafrost is frozen soil that has been at a temperature of below 0C for at least two years, trapping large amounts of carbon that is stored in organic matter held in the soil.

The study says it is estimated that there is more carbon contained in the permafrost than is currently in the atmosphere.

Thawing permafrost has potentially damaging consequences not just for greenhouse gas emissions, but also for the stability of buildings and infrastructure in high-latitude cities.

Roughly 35 million people live in the permafrost zone, with three cities and many smaller communities built on continuous permafrost.

The study says a widespread thaw could cause the ground to become unstable, putting roads and buildings at risk of collapse.

Recent studies have shown that the Arctic is warming around twice as fast as the rest of the world, with permafrost already starting to thaw across large areas.

The researchers suggest that the huge permafrost losses could be averted if ambitious global climate targets are met.

Lead author Sarah Chadburn, associate research fellow at the University of Exeter, says: “Achieving the ambitious Paris Agreement climate targets could limit permafrost loss. For the first time, we have calculated how much could be saved.”

The researchers used a novel combination of global climate models and observed data to estimate the global loss of permafrost under climate change.

They looked at the way that permafrost changes across the landscape, and how this is related to the air temperature, and then considered possible future increases in air temperature before converting these to a permafrost distribution map, using their observation-based relationship.

This allowed them to calculate the amount of permafrost that would be lost under proposed climate stabilisation targets.

Co-author Peter Cox, professor of climate system dynamics at the University of Exeter, says: “We found that the current pattern of permafrost reveals the sensitivity of permafrost to global warming.”

According to the study, permafrost appears to be more susceptible to global warming than previously thought, as stabilising the climate at 2C above pre-industrial levels would lead to the thawing of more than 40% of today’s permafrost areas.

The 2C target was set at the 2015 UN climate conference, which concluded the Paris Agreement, although participants agreed to aim for more stringent reductions to 1.5C.

Another of the co-authors, Dr Eleanor Burke, permafrost research scientist at the Met Office Hadley Centre, says: “The advantage of our approach is that permafrost loss can be estimated for any policy-relevant global warming scenario.

“The ability to more accurately assess permafrost loss can hopefully feed into a greater understanding of the impact of global warming and potentially inform global warming policy.”

The authors’ report of the greater vulnerability of the permafrost to warmth will now be tested by other groups of researchers, who will seek to replicate it.

Whether the achievement of the Paris targets on emissions cuts is likely to be possible still remains doubtful in the view of some leading climate scientists.