With “extreme policy measures”, a 2.5C limit is in reach, according to latest climate model from William Nordhaus 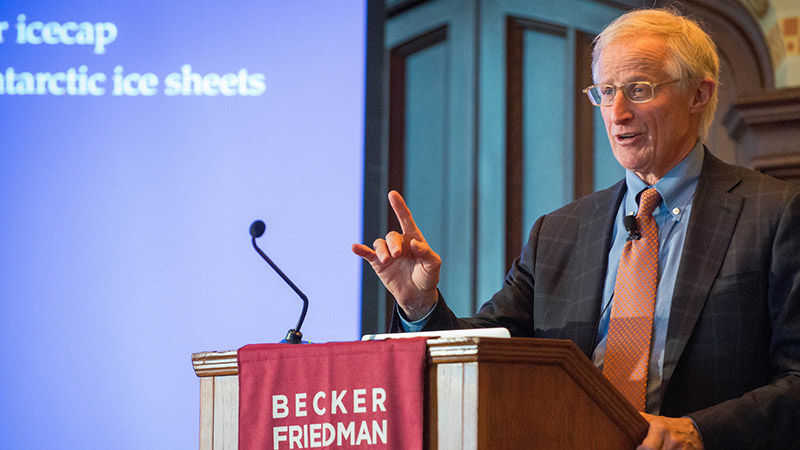 Agreed by 195 countries in December 2015, the Paris climate deal was billed as an historic game-changer by UN officials when it came into force last November.

Not everyone is convinced, least of all the respected climate economist William Nordhaus, who dimisses the deal as “rhetoric” in a new paper.

The Yale academic – who has explored the implications of climate change since the early 1990s – ran the numbers through his economic model known as DICE and came up with some bleak answers.

“The international target for climate change with a limit of 2C appears to be infeasible with reasonably accessible technologies – and this is the case even with very stringent and unrealistically ambitious abatement strategies,” he writes.

Ramming home the message, Nordhaus says: “notwithstanding what may be called ‘The Rhetoric of Nations,’ there has been little progress in taking strong policy measures.”

European plans to cut emissions 40% on 1990 levels by 2030 are “very modest”, Nordhaus says, despite repeated claims that Brussels is a global green leader.

In the current political climate, he suggests, “the prospects of strong policy measures seem to be dimming”.

Nordhaus’ bleak assessment is based on economic growth projections through 2050, which he estimates to be around 2.1% a year, slightly down on the 2.2% witnessed from 1980 to 2015.

The lack of any tough international carbon tax – which he believes is the most effective policy available – means that sustained growth translates to rising emissions.

“The future is highly uncertain for virtually all variables, particularly economic variables such as future emissions, damages, and the social cost of carbon,” he says.

“It might be tempting to conclude that nations should wait until the uncertainties are resolved, or at least until the fog has lifted a little. The present study finds the opposite result.

“When taking uncertainties into account, the strength of policy (as measured by the social cost of carbon or the optimal carbon tax) would increase, not decrease.”

Nordhaus’ calculation of the social cost of carbon (SCC) – an estimate of damages linked to climate change – has risen 50% since his last round of DICE modelling in 2013.

Under Barack Obama, the US government’s SCC is based on three models, one of which is DICE. The central value is US$36 a tonne of CO2, rising to $69 in 2050.

President-elect Donald Trump’s administration is expected to challenge that figure, considering it too high.