Turkish gas companies with corrupt past get World Bank loan 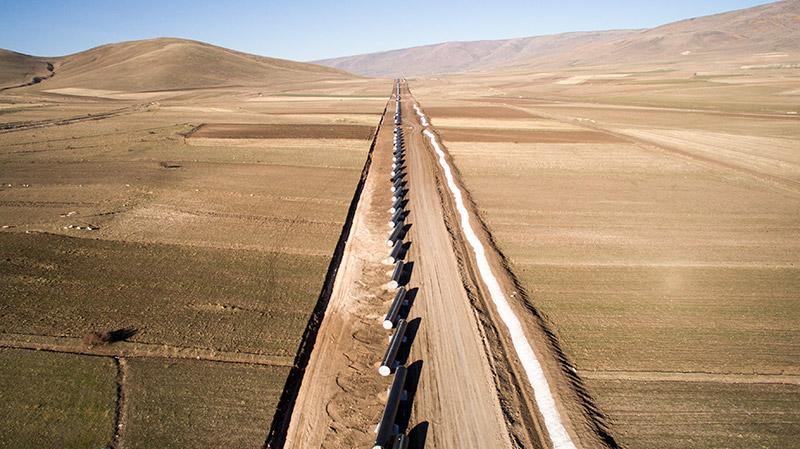 Work has begun on the Turkish section of the Southern Gas Corridor. Photo: Tanap

The World Bank has approved $800m in loans for a gas pipeline through Turkey and Azerbaijan that will be built by several companies with a history of corruption scandals.

The World Bank’s board of directors on Tuesday granted $400m loans to the Turkish and Azeri governments to complete their 1,850 km segment of the Southern Gas Corridor – known as the Trans-Anatolian Natural Gas Pipeline (Tanap) – which will connect southern Europe with gas fields in Azerbaijan.

In Turkey, the World Bank loan will be overseen by state-owned corporation Botas, which has contracted various construction companies to complete sections of the work.

Powerful executives within these companies were convicted for their involvement in organised gangs that systematically rigged tenders in the energy sector during the 1990s and 2000s, according to a report released last week by Bankwatch.

The Fernas group, which will build a 375km section through northeastern Turkey from the Georgian border, is owned by Muzaffer Nasiroğlu. Nasiroğlu was jailed for bribery and corruption in 2005. The current CEO of Fernas, Yaşar Giregiz, was also convicted for his involvement.

At the opposite end of the pipeline, where the Limak company will build the section that crosses the Greek border, the chairman of Limak Nihat Özdemir was convicted in 2008 for his involvement in rigging tenders, including for pipeline projects.

Botas, the state-owned pipeline company that granted tenders to Limak, Fernas and others, was at the centre of a massive investigation, known as Operation Blue Line, which lead to 77 executives (including Nasiroğlu and Özdemir) standing trial in 2008.

Initially a court sentenced all 77 defendants to jail, but a series of appeals finally lead to an overturning of the judgement in the Supreme Court in March 2016 due to insufficient evidence.

Sakir Arikan, who works with Fernas and was one of the 77 executives involved in the Operation Blue Line, told Climate Home that the accusations in the Bankwatch report were false and that the executives had been exonerated. He said that the judges in the case had been jailed for their part in an attempted coup in 2016.

The World Bank has been contacted for comment on the contents of the Bankwatch report.

On announcing the loan on Tuesday, World Bank vice-president for Europe and Central Asia Cyril Muller said: “Tanap will not only boost competitiveness and create economic opportunities for people in Azerbaijan and Turkey, it will also support regional trade, improve connectivity, and support energy security in Turkey and in Europe.”

A coalition of civil society groups, including Bankwatch, oppose the construction of the pipeline. They argued that the corruption exposed by the report raises doubts that the project would provide public benefit.

“It is hard to see how the World Bank’s support to this project will benefit in any way citizens in Azerbaijan and Turkey. Such financing is at odds with any development logic since it mainly reinforces the reliance of both countries on revenues linked to fossil fuels for the autocratic regimes in place,” said Xavier Sol, director of Counter Balance.

The Asian Infrastructure Investment Bank was scheduled to vote on Wednesday on its own $600m loan to Tanap. A World Bank press release implied that several other development banks that have been considering loans were joining the bank in a coalition to support the Southern Gas Corridor. However there was no confirmation of this on other development bank websites.

According to Bankwatch, a total of $9.4bn in public development finance is under consideration for the $45bn project.

In Azerbaijan, the World Bank’s $400m loan will also be handled by state owned companies. The regime, headed by president Ilham Aliyev, has a deeply troubling human rights record. But energy security and the supply of gas to Europe have tempted politicians to overlook and even actively quash those concerns in order to curry favour in Baku.

However analysis by the London-based environmental think tank E3G found that the argument that the Southern Gas Corridor was necessary to secure energy supply was based on an assumption that the 2030 gas demand would be 72% higher than expected, should Europe meet its energy efficiency targets.

“This is not rocket science, why would you pipe gas in from Asia? For what reason are you doing it when there is a glut of gas capacity across Europe?” said E3G chief executive Nick Mabey.

“With clever, integrated infrastructure planning, which we don’t do in Europe, you could get energy security much cheaper and with much less capital outlay. But of course, for lots of people, the capital outlay is the whole point, because that’s where you get the 10% and that’s where people make their money.”

The Bankwatch report also highlighted corruption and organised crime links in Italian and Greek companies that have won contracts to work on lower sections of the pipeline.

UPDATE: According to reports, the Asian Infrastructure Investment Bank (AIIB) approved a $600m loan to the Tanap project on Wednesday. It is the biggest ever loan made by the AIIB.

Public finances: The European Bank for Reconstruction and Development, European Investment Bank and Asian Development Bank and are all considering publicly-backed loans for the development in excess of $500m each. The World Bank has approved an $800m loan.