The world’s working coal mines and oil and gas fields contain enough carbon to push the world beyond the threshold for catastrophic climate change, according to a report released on Thursday.

If all the existing fuel were to be burned, projects currently operating or under construction could be expected to release 942Gt CO2, said the report by US-based think tank Oil Change International (OCI).

This exceeds the carbon limits that would most likely warm the world 1.5C and even over 2C above the pre-industrial average. These were limits agreed at last year’s climate conference in Paris.

It has been established for some time that the enormous unworked reserves claimed by fossil fuel companies contain vastly too much carbon to ever be burned safely. But OCI said that this was the first time an analysis had been done of how much greenhouse gas is stored in projects already working or under construction.

Founder of 350.org and climate campaign Bill McKibben said the report “change[d] our understanding of where we stand. Profoundly”.

It means that even if not a single new coal mine, oil or gas field were opened up, the carbon budget would be at risk, said OCI’s executive director Stephen Kretzmann.

Projected investment in new extraction sites and infrastructure over the next 20 years adds up to a staggering US$14tn, the report found. 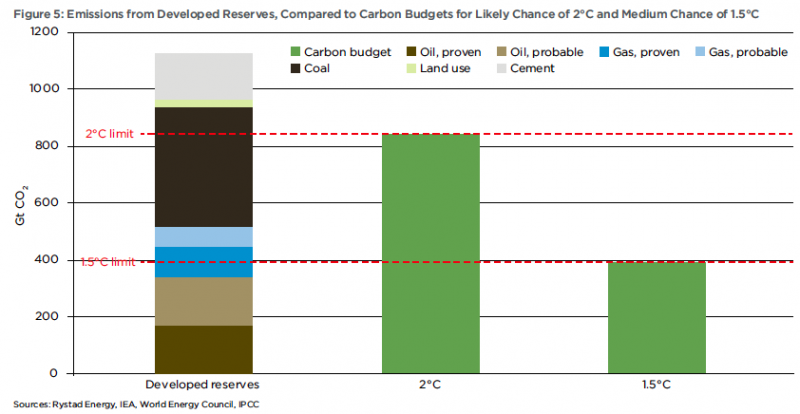 The OCI report said existing oil and gas fields alone would exceed the carbon budget for 1.5C – which is a limit some small island states say would finish them and scientists believe would wipe out most coral reefs.

James Leaton, research director at the Carbon Tracker think tank which did much to popularise the concept of “unburnable carbon”, said research by Carbon Tracker in 2015 showed coal demand was declining so quickly that current reserves would be enough. But the picture was less clear for oil and gas.

“There is clearly no need for new coal mines to be developed if we are to stay within a 2C carbon budget,” said Leaton. “Because oil and gas production declines over time in any particular well, this may fall faster than the level of oil and gas demand in [a 2C scenario], in which case some new production would be needed. Depending on how much carbon budget you allocate to each fossil fuel, and the speed of the energy transition assumed, the window for new oil and gas will also start to close.”

In the UK, the government has committed to opening its shale gas resources to fracking. Ken Cronin, chief executive of the industry body UK Onshore Oil and Gas, said: “This report needs to look more deeply into the use of gas in a modern energy mix, looking at areas such as reformation of methane into hydrogen and carbon capture and storage, particularly for heating systems and potentially transport. The simple fact is that the best way to combat climate change is to remove coal ASAP and to do that you need to replace much of the coal capacity with gas.”

The OCI report did not take into account carbon capture and storage (CCS), which it argued is still at an “uncertain” stage of development. The International Energy Agency reported last week that CCS, which is fitted to emissions sources to trap carbon, was being rolled out at a rate of just one project every year.

Study author Greg Muttitt said it was imperative for governments to focus on shutting down new mines and fields before a sod was turned.

“Once an extraction operation is underway, it creates an incentive to continue so as to recoup investment and create profit, ensuring the product – the fossil fuels – are extracted and burned. These incentives are powerful, and the industry will do whatever it takes to protect their investments and keep drilling,” he said.

There is new carbon math coming tomorrow that will change our understanding of where we stand. Profoundly.

Ben Caldecott, director of the Sustainable Finance Programme at the University of Oxford Smith School said: “One direct implication of meeting climate targets are stranded upstream fossil fuel assets. These stranded assets need to be managed, particularly in terms of the communities that could be negatively impacted. Policymakers need to proactively manage these impacts to ensure a ‘just transition’.”

The report expands on a call made by former Kiribati president Anote Tong last year to stop opening new coal mines. China, the US and Indonesia, the world’s largest, third and fifth largest coal producers, have banned any new coal mines. In the US, the moratorium is only on public land.

But in Australia’s Galilee basin, there are nine proposed coal mines with a total lifetime emissions of 24Gt CO2. This includes the massive Adani Carmichael mine, which the Australian government has approved. The Australian Department of Environment would not comment on whether it had assessed the impact of the Carmichael mine on the global carbon budget.