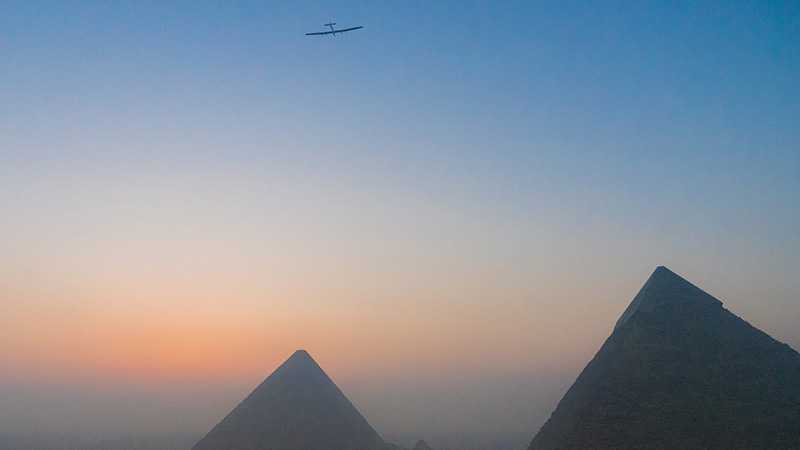 Clean energy technologies like the Solar Impulse plane need to have radically scaled-up for the world to have a hope of cutting emissions (Pic: Solar Impulse/Flickr)

An investigation into the dangers posed by temperature rises above 1.5C opened on Monday with a top UN official branding it the “yardstick” on which efforts to tackle global warming will be based.

Nearly 100 government officials and scientists are in Geneva this week for the launch of the two-year study, which is under the control of the Intergovernmental Panel on Climate Change.

Its findings will form the “scientific basis” of a global stocktake in 2018, when the climate plans of 195 countries will be assessed at a UN meeting, said IPCC chair Hoesung Lee.

“It will be the yardstick on whether countries are doing enough,” the South Korean economist told an opening meeting of invited experts.

July data are out, and what do you know, still 99% chance of a new annual record in 2016. pic.twitter.com/ndSsbYuedA

Mandated by the 2015 Paris climate agreement, the report will assess the scientific and economic viability of avoiding global temperature rises of 1.5C above pre industrial levels.

It’s also expected to look at the potential impacts of warming at and above that level, and detail the potential greenhouse gas emission pathways still available.

Investment in technologies that can remove CO2 from the atmosphere or mass tree planting are among other areas that will be analysed, an IPCC spokesperson told Climate Home.

“It comes at a moment there is urgency and also momentum to really bring science and policy together to make an important decision,” said Thelma Krug, a Brazilian scientist who is IPCC vice chair. “It’s most likely the most pressing report the IPCC will have to produce.”

Two British climate scientists likely to take part in the study told Climate Home the two-year window for the new report is ambitious given the paucity of research on the 1.5C goal.

The vast majority of reports assessing temperature rises have focused on the 2C warming target, a figure discussed since 1975 and formally agreed at a 2010 UN summit in Cancun.

Even that limit is questionable, said Florin Vladu, an official with the UN climate body. “2C is not a safe limit anymore,” he said, adding “we need to push the defence line.”

Many question whether meeting the 1.5C goal is still possible given the levels of carbon dioxide and other warming gases already in the atmosphere.

Jan Christoph Minx and Sabine Fuss from the Mercator Research Institute say the limit requires “close to zero” of net CO2 is released.

“Even in the most optimistic case, it will not take longer than five years to exhaust the remaining carbon budget at current rates of CO2 emissions,” they said in a Huffington Post article.

“It will be, on the other hand, about 10-25 years before the world crosses the budget line for 2C.”

This week NASA underlined fears that levels of warming are on the inexorable rise. July was the hottest month on record, said the US agency’s Gavin Schmidt.

2016 is widely expected to be the warmest year since records began, boosted by climate change and by an El Nino weather event, which causes huge releases of heat from the oceans.

Levels of atmospheric carbon dioxide are unlikely to dip below 400 parts per million in the near term, a once-iconic level that scientists say heralds warming well above 1C.

Unusual weather events this year that scientists say are linked to climate change include an Arctic ‘heatwave’ in January, a Middle East heat spike of 54C and mass bleaching of coral reefs.

A critical mass of countries are expected to formally approve the Paris climate agreement on 21 September in New York, allowing it to enter into force.

Analysis: Can a GIF change the way we think about global warming?

Still, this week an influential trio of climate writers have declared their lack of faith in governments and their ability to tackle the issue and urged the public to take affirmative action.

“World War III is well and truly underway. And we are losing,” wrote 350 founder Bill McKibben in the New Republic, calling for a vast government-led plan to ramp up clean energy capacity.

“The world can cope with 7 or even 10 billion people. But only if we stop eating meat,” said George Monbiot in the Guardian, asking readers to consider becoming vegans.

“We are risking everything by continuing on this path. Don’t let anyone convince you otherwise,” he wrote.

“We can’t have a stable and prosperous global society without the basics of water, food, health, and stability.”