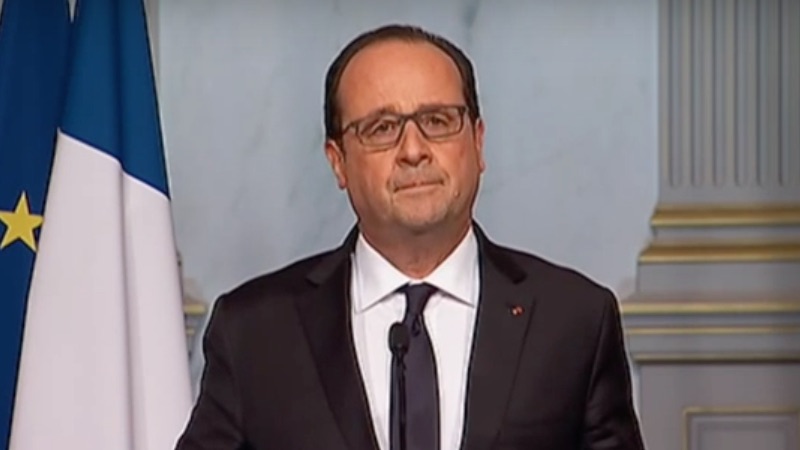 French and UN officials say plans for the 2015 UN climate summit in Paris will continue, despite Friday night’s terror attacks that left over 130 dead and 300 injured.

Former French president Nicolas Sarkozy was talked out of calling for the summit to be postponed, according to the AFP news agency, after a meeting with Francois Hollande.

“He had questions about it on Saturday… he spoke about this with the president who gave him a full response. He will not ask for COP21 to be postponed,” a source told AFP.

Over 120 heads of state and 40,000 delegates are expected at the two week climate meeting, which starts on November 29. UN officials hope a new treaty to limit global warming will be signed off at its conclusion.

Countries attending the G20 summit in Antalya this weekend also voiced support, according to a Russian official.

“It will be held for sure, all the states, at least at the level of presidential representatives consider that it is unacceptable to change their plans and to surrender to the terrorists’ threats, that’s why Paris conference will be held and we hope that it will be successful,” said Svetlana Lukash in quotes reported by Sputnik News.

Further details of security arrangements at the UN summit will be released this week, said French officials.

Still, green groups say they may now rethink plans for a march through the streets on Paris on November 28. There had been hopes over 200,000 could take part in a show of force before the talks started.

According to Reuters organisers will meet on Monday at 1400 GMT to review their plans. Oxfam said the French presidency of the talks would inform their decision.

Events in Paris have overshadowed the meeting of the world’s top 20 economies in Antalya, Turkey, where the threat of terrorism and war in Syria have dominated discussions.

Leaders are expected to discuss how they can meet longstanding pledges to slash subsidies for oil, gas and coal, which the IMF says amount to over $5 trillion a year.

They will also consider a recommendation from the Financial Stability Board to set up a global climate risk task force to assess the potential losses investors could face if the world moves away from fossil fuels.

“Once climate change becomes a defining issue for financial stability, it may already be too late,” said bank of England governor Mark Carney, who chairs the FSB.

Megan Darby has more background on what to expect here.

Don’t forget to tune in…
BBC environment analyst Roger Harrabin kicks off the first of a three-part series ahead of the UN climate summit on Monday at 2000GMT on Radio 4. You can listen online here.

Never heard of them? Join the club of millions. But they’re a huge part of global financial flows.

This week the OECD will try and reach agreement on how to phase out support for fossil fuels through these credits.

Japan, which accounted for $20 billion of that figure, previously defended the practice. In a significant shift last month, the country got behind a phase out [see this article by Megan Darby for more information].

Speaking at the opening of the G20, India PM Narendra Modi underlined his support for the COP21 summit, calling for a “concrete outcome” in Paris.

Modi also revealed he’s working on a grand pact to drive solar energy growth with Francois Hollande, with a view to launching the initiative on 29 November.

Development in harmony with nature is the goal of my proposal to launch, along with the French President Hollande, an alliance of solar-rich countries at the time of COP-21 meeting.

“He added: “G20 must continue to focus on infrastructure, as we did In Brisbane in 2014. Clean energy and environment friendly infrastructure will address both development and climate change.”

This week UK energy and climate chief Amber Rudd will reveal her plans for keeping the country’s lights on, and it’s likely to have mixed news for the clean energy sector.

“Energy security has to be the first priority. It is fundamental to the health of our economy and the lives of our people,” she will say, according to the Daily Telegraph.

But it’s unlikely to offer much good news for the UK wind and solar sectors, which were informed by government the range of subsidies to incentivise the use of clean power would be radically cut.

“New, clean technologies will only be sustainable at the scale we need if they are cheap enough. When costs come down, as they have in onshore wind and solar, so should support,” Rudd is expected to add.

There is one spot of good news for green groups – Rudd will say the UK’s fleet of coal plants are unreliable and likely to face early closure, perhaps as soon as 2023.

“Longer term, it seems obvious that the risks from relying on ageing coal plant, which requires heavy investment just to maintain the plant, will increase,” she will say.

Keep an eye for a climate finance spectacular from the Climate Policy Initiative on Monday, together with a review of corporate influence at the UN climate talks later in the day.

The World Meteorological Organization will issue its latest Update on El Niño on Monday 16 November at 1400 GMT.

NGO Bankwatch will also explore the impact of EU development finance on clean and dirty energy investments on Tuesday.