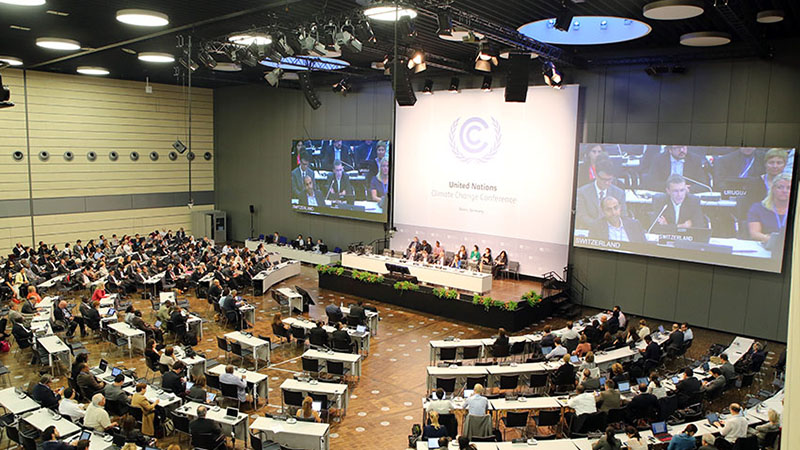 Time-pressed talks on a global climate deal faced delays on Monday after the co-chairs guiding the process accepted their proposed draft agreement lacked support from most countries.

UN officials had presented a radically cut 20-page set of proposals earlier this month, but their work was shredded in an intense and angry morning session in Bonn.

Instead of planned negotiations, the text swelled rapidly on a binge of over 50 so-called “surgical insertions” from countries, most ranging between 1-2 pages.

Most submissions came from the Africa Group and G77+ China, reflecting their frustration at what they argued was a text tilted in favour of richer nations.

The obligation of rich countries to provide climate finance and help poorer nations cope with expected extreme weather events were specific concerns raised by her group.

Evoking memories of apartheid, she said the document produced by US State Department veteran Dan Reifsnyder and Algeria’s Ahmed Djoglaf had left a potential Paris deal unbalanced and lopsided.

“To the G77 this text seems to rewrite, re-interpret and replace the convention… it jeopardises the interests of developing countries,” Diseko said.

“Credit us with a little wisdom,” said Malaysia’s Gurdal Singh. The document was an “injustice” added Amjad Abdulla, chief negotiator for the alliance of small island states (AOSIS).

Steve Cornelius, a former UK negotiator now working for WWF-UK, said the language used was some of the strongest since the final hours of the ill-fated Copenhagen summit of 2009.

Harjeet Singh, representing ActionAid, said the rhetoric was a result of a lack of trust in the two co-chairs. It would “seriously hamper” the process moving forward, he warned.

“Most options that G77 put forward were not reflected… adaptation, loss and damage, finance – you don’t see those options,” he added.

“Equity is at the core of it… they have not mentioned it… it does not say who has to do more.”

On twitter – never the most reliable barometer at these talks – rumours the text had been penned by the US State Department reached fever pitch, spawning the hashtag #UStext.

Liz Gallagher, an analyst with the London-based E3G think tank dismissed suggestions of a “super conspiracy”, arguing instead this was the result of pre-Paris tensions.

“It was never going to be a totally smooth process to whittle down the negotiating text; the stakes are so high,” she said.

One reason nerves are on edge is that what comes out of Bonn will be the basis for ministerial talks at the start of November and the heads of state conflab on day 1 of the Paris summit.

“The G77 will be asking to see their previous proposals on adaptation and loss and damage reflected in the iteration of the text that goes to ministers at high level events,” said Saleemul Huq, a Bangladeshi scientist.

One veteran of this process Climate Home spoke to dismissed Monday’s excitement as “nothing new”, but there were evident signs of nerves from the UN and negotiating teams.

Switzerland’s environment ambassador Franz Perrez described himself as “very concerned with how this process is going.”

Trigg Talley, a usually phlegmatic US number 2 negotiator, struck a note of warning, mindful perhaps of the political capital the White House has invested in this process.

“We have 5 days left before Paris… before our leaders come to give us all momentum,” he said.

“I guess I’m wondering to see what the whole picture is… I’m starting to worry we actually will find we get bogged down and will not understand what the full picture is.”

Mindful of the oncoming storm, the outgoing Peruvian president of this process, Manuel Pulgar Vidal, had recorded a greeting message that was played out first thing Monday.

“We have 2 options… the first is to throw into the waste basket what we have in front of us, but all of us know that if we do that we will suffer what we suffered in 2009,” he said.

On that, at least, there was widespread agreement. But the road to Paris remains fraught with difficulties.