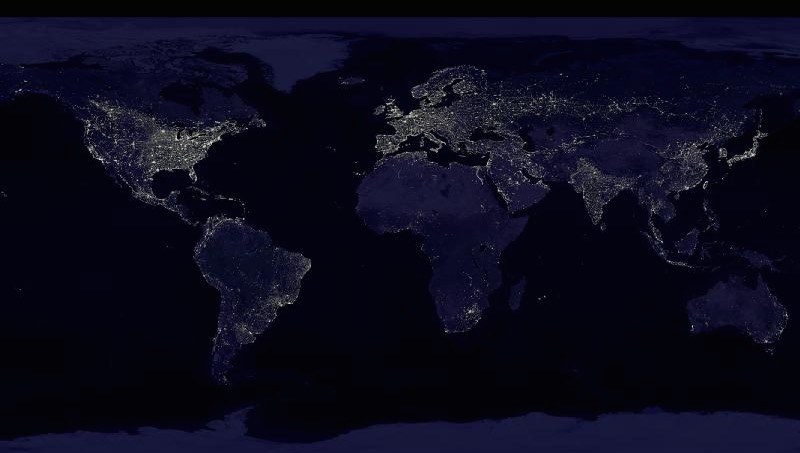 German scientists have identified a new way to measure the planet’s energy budget: the brightness of the city lights.

And the first results clear up one or two points. American city-dwellers emit “many times” more light than their counterparts in Germany, while western German citizens tend to dim the lights more than those in the former Eastern Bloc.

That scientists can now say such things with confidence is because two new instruments have been sweeping the skies.

Until recently, the “planet-at-night” maps were composites of data collected not just at different times on different nights, but at different seasons during different years.

They delivered vivid confirmation that more electrical energy per capita was expended in the US and European urban areas than in the great megacities of the developing world − but that was about all.

But Christopher Kyba, of the German Research Centre for Geosciences, and colleagues report in the journal Remote Sensing that the European Space Agency’s NightPod instrument on the International Space Station has provided an atlas of individual cities at night. It has even revealed the patterns of lighting at street level.

Also, a new US weather satellite called Suomi has been in polar orbit since 2012, and on board is an instrument called the Visible Infrared Imaging Radiometer Suite Day/Night Band sensor, which has somewhere between 45 and 88 times better spatial resolution than its predecessors.

Furthermore, it goes around the planet 14 times a day, over the same location every 16 days, and takes its measurements at around 01.30 am local time, all the time. So the measurements have unparalleled consistency. .

But the German scientists decided to use data from the two instruments just to explore the local geography of brightness.

They carefully matched imagery provided by the astronauts on the space station and by the detector on the weather satellite, then made allowances for the different flyover times and flight paths, and tried to measure radiance scales from the six great European cities of London, Paris, Berlin, Warsaw, Amsterdam and Madrid.

Light emissions from airports, sports stadiums and harbours were also pinpointed, and they even measured the lights of Madrid at nine different times of night to better interpret what they were looking at.

They found unexpected results − and one was that there were subtleties even in the emissions gap between German and US cities.

The bigger the city in the US, the more brightly shone the city lights. In Germany, as the cities grew in size, the light per capita tended to diminish, as if greater resources were invested in lower levels of light pollution, or in energy saving, or in different types of lamps.

In US towns of 10,000 inhabitants, the “sum of light” was three times what it would be in a German settlement of the same size. A US town of 100,000 people would be five times brighter than a German one of the same population.

The other surprise was that what had once been East German cities seemed more profligate with the electricity than those in what were once in the West.

Even in the capital, once divided by the notorious Berlin Wall, the scientists report that “the imprint of 40 years of divided lighting management remains visible in Berlin, despite nearly a quarter century since the German reunification”.

The research has barely begun, but the scientists were able to distinguish the glow from street light systems, automobile lights, industrial areas, major roads, city centres, and even the 19th-century gas lamps – all 40,000 of them – that survive in Berlin

“The size of the difference in light emission is surprisingly large,” Dr Kyba says. “This work will allow us to identify comparable cities in order to uncover the reasons behind the differences.”