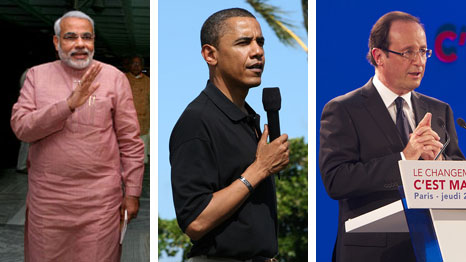 One of the main findings of the New Climate Economy report, published on Tuesday, is that an economic fog of flawed models and numbers is stopping decision-makers from seeing that we can cut carbon emissions and boost economic development at the same time.

Seven countries commissioned the report, including Britain, South Korea and Indonesia, with the aim of improving economic decision-making, and especially helping world leaders convening next week for a UN General Assembly meeting on climate change in New York.

The report finds that, in general, the problem of climate change has been misconceived.

The debate, to date, has often been that we must try to avoid climate change, which will lead to higher sea level rise, mass extinction of species and more frequent deadly heat waves, but also beware of higher costs of climate action, such as replacing coal with more expensive solar power.

The present day is pivotal, it says, because we are about to invest colossal sums in infrastructure, over the next 15 years, as urbanisation continues apace and emerging economies drag themselves out of poverty.

We can choose between continuing to invest in the economic model of the present and the last decade, or a low-carbon, climate-resilient alternative.

The report finds many flaws in the present approach, including a failure to recover pre-financial crisis growth as productivity gains have sagged; growing inequality; and government and market failures.

Regarding investment, it finds that the two approaches cost about the same, once you factor in the lower lifetime operational costs of low carbon energy which offsets a higher capital cost; greater productivity of low-carbon technologies; lower grid costs from avoiding large, centralised power plants; and better balance of payments and improved security of supply from lower fossil fuel imports.

The present debate about cost misses the point, if the overall difference is too close to call. The question instead becomes what kind of quality of life, climate and air people want for the rest of this century and beyond.

On these criteria, the low-carbon model wins hands down: more efficient, low-carbon infrastructure will improve air quality and reduce deaths from lung and heart disease; cut the cost of services in more compact, mixed-use cities; protect forests and green spaces; and reduce emissions of greenhouse gases, and so avoid climate change which threatens to undo the gains of economic growth.

The obvious and perhaps most interesting question is, if it is so simple, why is the world not already on such a path?

The new report presents some interesting case studies for why the world remains on its present course. These include: flaws in the default economic tools used by finance ministries; and the political difficulty of embracing change.

In its chapter on economics, the report shows failures in the conventional economic models which finance ministers use to choose investments, plot growth and balance budgets.

The models are tuned to assume we live in a world of perfect markets. For example, they assume that there is no waste as a result of subsidies which make energy cheaper to consume; no costs from sprawling cities which make transport and city services more expensive and pollute the air; and, in some cases, no climate impacts from greenhouse gas emissions.

The models are built in this way because it is impossible to model the real world, and so it is necessary to draw the line with certain assumptions. But these assumptions make a low-carbon transition appear more expensive, because the market failures they ignore are precisely some of the main benefits of a low-carbon approach.

A study commissioned by the green groups WWF and Friends of the Earth (quoted in the NCE report), for example, examined the British Treasury’s computable general equilibrium (CGE) model, and found that accounting for the health benefits of reduced air pollution from burning fewer fossil fuels reversed the net cost of climate policy into a net benefit.

A related, systematic problem in national decision-making is the standard use of gross domestic product (GDP) as a measure of wealth, which does not account for the depletion of natural resources, or damage caused by pollution.

The problems of these flawed economic tools are compounded, the report argues, by the political difficulty of changing course, because of a tendency for historical decisions to determine present and future ones, called path dependence.

For example, governments may invest in innovation to enhance present technologies, such as the internal combustion engine or oil and gas extraction, rather than recognise the potential of emerging technologies for unleashing energy savings in consumption.

Governments help determine the path of innovation through their spending on R&D, which in turn attracts entrepreneurs, and ultimately consumers, as well as regulations including fossil fuel subsidies.

Also inclining governments towards the status quo is the influence of elites, who have generated their wealth from present economic structures, and who may exert undue sway on preserving things as they are.

The most concrete example of how market and government failures can weigh against political support for climate action is the damage to public health caused by burning fossil fuels.

The most important health risk is from minute, air-borne particles with a diameter smaller than 2.5 micrometres (PM2.5). Such smoke-like particles increase they prevalence of lung cancer, chronic obstructive pulmonary disease, ischemic heart disease (from reduced blood supply) and stroke.

NCE-commissioned research estimated that in China, PM2.5 pollution was linked to a median estimate of 1.23 million premature deaths in 2010, with health damage equivalent to 9.7-13.2% of China’s GDP.

In India, PM2.5 pollution was estimated to cause a median estimate of over 627,000 premature deaths, and to generate health costs valued at up to 5.5-7.5% of GDP.

The NCE report cited estimates for the total health damages caused by burning fossil fuels at $73 per tonne of CO2, in the world’s 15 largest carbon emitters.

Such estimates are about double the US government’s estimate for the cost of climate damage per tonne of CO2 (about $30 per tonne). Accounting for health is therefore vital in an economic analysis of the net impacts of climate policy.

Tilting policy decisively in favour of climate action will depend on revealing other market failures, and helping governments devise alternatives.

In the case of ending fossil fuel subsidies, governments must find new, more efficient ways to support people who cannot afford to pay their energy bills, for example.

The NCE report shows that an important step in the shift to a low-carbon pathway is as simple, and difficult, as banishing an overly simplistic way of looking at the global economy, and for governments to act more rationally.