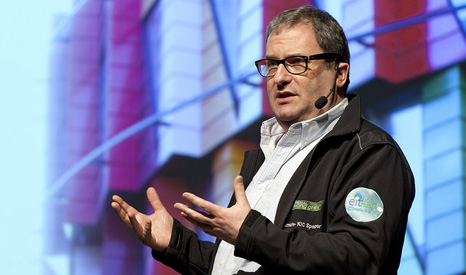 In the race for creative solutions to climate change, what is more important: carbon savings or slick presentation?

When RTCC peeked into the Dragon’s Den of climate innovation last month, it seemed the judges went for style over substance.

Richard Templer, chemistry professor at Imperial College London and UK director of Climate-KIC, defends the judges’ decisions. He bursts with pride in his cohort of entrepreneurs and the successful businesses they have created.

While climate negotiators talk themselves round in circles, these start-ups are taking action – and making money in the process.

“For climate innovation to get into the market, it has got to be attractive to people,” says Templer. “There have been quite a lot of hair-shirted attitudes.”

Climate-KIC is one of three programmes sponsored by the European Institute of Innovation and Technology (EIT). (KIC stands for knowledge and information community).

Through a mix of summer schools, projects and start-up “accelerator” schemes, they aim to boost Europe’s standing in the global innovation stakes.

The other programmes are in ICT and energy. Templer admits the decision to separate climate and energy (the sector responsible for most carbon emissions) “was a bit mystifying”.

The energy KIC, based in Poland, does not entirely pull in the same direction as its climate cousin, either, covering “clean” coal (a phrase recently banned as misleading by the UK’s Advertising Standards Authority) as well as low carbon technology.

Still, it frees up the climate programme to explore some of the less obvious sources of emissions cuts.

While cleantech tends to be associated with renewable energy, there are big opportunities for greening other sectors.

Climate-KIC looks for projects that solve problems within whole systems.

Templer takes the example of Aqdot, a winner of the 2013 European venture competition. This start-up is working with Novozymes, a biotech company that claims a whopping 48% share of the global enzyme market.

The most familiar application of enzymes for most people will be bio laundry detergent. They are also used in a range of agricultural and industrial processes.

Aqdot’s technology captures the enzymes after use. That may not sound too exciting, but it means less runoff into wastewater. That in turn means less energy is needed to clean up the wastewater, which can be a costly and carbon-intensive process.

As a “platform technology” that can be used in lots of ways, this could potentially have a big impact.

EIT gave Climate-KIC €75 million this year and is set to provide nearly €100 million next year. As a condition of the funding, Climate-KIC must raise three times that amount from other sources.

But it is doing much better than that, according to Templer, getting some 90% of its cash from partners – almost 250 organisations, of which more than half are businesses.

“We are unusually successful. Last year, eight out of nine start-ups that got to the end of our process went on to get more than a million pounds.”

Another big backer is supermarket chain Sainsbury’s, which is looking for ways to slash its carbon footprint 30% by 2020, compared to 2005 levels, as part of its 20×20 strategy.

This is “a great stimulus” for start-ups, says Templar, creating some internal competition for contracts with the retailer.

Last month’s venture competition in London was one element of Climate-KIC’s efforts to coach and support entrepreneurs taking their products to market.

Nine project leaders were pitching for two prizes of €20,000 and the chance to bid for double that funding at the European final in Valencia, Spain.

The winners are also set to appear on Bloomberg TV. And the successful candidates, RTCC puts it to Templer, were the most telegenic – but not necessarily the ones with the biggest carbon saving potential.

Kate Hofman of GrowUp urban farming, a business that farms salad and fish in London, tells an engaging story.

And she left a well-paid job at IBM to launch the venture, raising money on Kickstarter.

But does it really make sense to use land for agriculture in a city with a chronic housing shortage? And while all the entrepreneurs must prove their carbon-cutting credentials to get on the scheme in the first place, they did not feature highly in the GrowUp pitch. 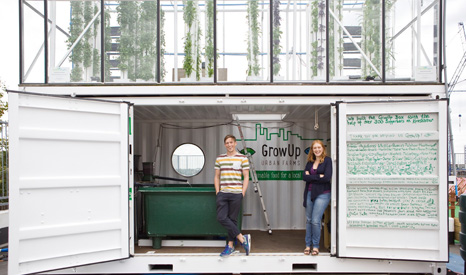 Hidde-Jan Lemstra of Reduse had an undeniably impressive product in the “unprinter”, which uses lasers to blast ink off paper so it can be re-used. This uses 80% less energy than recycling or using new sheets, the start-up estimates.

But weren’t we supposed to be operating in a paperless office by now?

Those were the winners. They triumphed over CHESS, a project to actually suck carbon dioxide out of the air while generating electricity from gas.

That is “potentially a silver bullet”, Templer says, but unfortunately not the kind of project a venture capitalist will invest in.

Energy technologies take 10-15 years to get to market.

“It is too expensive, it is too high risk. You would sink a hundred million pounds into that easily to get to the point there would be a 1GW station.

“You need governments to invest in it and major utilities to take it on.” 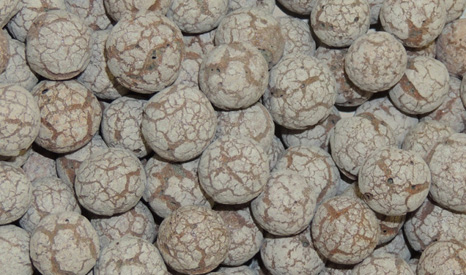 Then there is Novagg, an unglamorous initiative to make aggregates out of waste products. “That is scalable, that will make a huge impact. It is grubby, but that is where a lot of this stuff is.”

But on the day, “the pitches from Kate and Hidde-Jan were just better,” says Templer. “I think every single project is great.

“In the absolutely optimal world, you create something that scales up to multiple millions of dollars a year and strikes of tonnes of CO2 from the atmosphere.

“The reality is, most of the stuff is much more complex than that.”

And with a rapidly expanding population and only a few decades to get a handle on carbon emissions, Templer says he joined Climate-KIC because he wanted less talk and more action.

“I got really fed up with the wailing and gnashing of teeth, or not doing anything.”

After the agricultural, industrial and information revolutions, the green economy comes next.

“I am always amused when people talk about saving the planet. The planet will survive – this is about saving our necks.

“We can’t go on as we are now. Nature has told us this; the signals are very clear.”