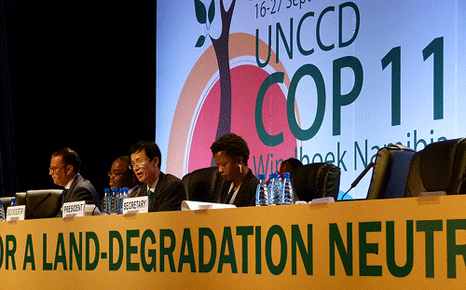 Negotiations aimed at developing a global agreement on reducing land degradation are progressing slowly at a UN summit in the Namibian capital Windhoek.

Delegates RTCC has spoken to say Brazil and the USA are blocking proposals to develop a set of indicators countries could use to measure the health of ecosystems.

Both countries believe this would infringe national rights and could be used to dictate how future development policies are framed.

Supporters say agreed measurements could allow countries to accurately chart the health of their soil, water, trees and other services provided by nature.

The US Congress is notoriously hostile to international agreements, and would be unlikely to back any such measure.

A negotiator RTCC spoke to on condition of anonymity talked of an increasingly fractious atmosphere within the talks, with increasing levels of anger directed towards Brazil’s delegation.

“They are concerned this will affect their economic plans, especially production of ethanol, and future use of the Amazon,” they said.

Brazil has rejected any use of the term ‘Zero Net Land Degradation’ in the text, and has so far refused other efforts to develop a compromise.

The country has historically rejected moves at UN summits to force it to measure, report and verify destruction of the Amazon Rainforest, most recently at climate change talks in Doha last year.

But this stance is seen as surprising given the clear commitments countries gave at the Rio+20 Earth Summit in June 2012, in a text drafted by Brazil.

“We recognize the need for urgent action to reverse land degradation,” paragraph 206 reads.

“In view of this, we will strive to achieve a land-degradation-neutral world in the context of sustainable development. This should act to catalyse financial resources from a range of public and private sources.”

Talks are expected to run into the early hours of Thursday morning, with a decision scheduled on Friday afternoon, although UN staff privately say they expect negotiations to conclude on Saturday.

A lack of high-level political figures who can discuss key issues separately from the main strand of diplomatic talks means there is no obvious solution.

The Namibian Presidency of COP11 is understood to be ready to directly contact the Brazilian Government in a bid to resolve the impasse.

Speaking to RTCC, EU delegation chief Timo Makela says it is vital that the summit builds on the progress achieved at the Earth Summit in 2012.

“By far the most important thing for us is to take forward the commitments heads of state made at Rio+20, they agreed to step up efforts to achieve land degradation neutrality,” he said.

“From the EU side we now need to take this forward. The political momentum is there and that needs to be taken on board.”

He added: “I don’t want to end up in endless debates over definitions…we all understand what we are losing.”