The Earth’s climate is more sensitive to changes in CO2 than previously thought, according to new research.

New data taken from an Arctic sediment core that has recorded the climate for the past 3.6m years, suggests climate models, including those used by the Intergovernmental Panel on Climate Change (IPCC), have not given enough weighting to CO2’s role in the changing climate.

The latest analysis by a team from the University of Massachusetts Amherst revealed that millions of years ago temperatures in the Arctic were 8°C higher with summer averages of around 15-16°C.

At the time, atmospheric concentrations of CO2 were comparable to today’s levels, which are set to pass the 400 parts per million mark.

“One of our major findings is that the Arctic was very warm in the middle Pliocene and Early Pleistocene [around 3.6 to 2.2 million years ago] when others have suggested atmospheric CO2 was not much higher than levels we see today,” reads the report published in Science. 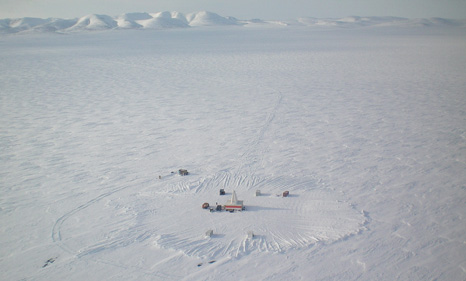 The sediment drilling station in the middle of the frozen El’gygytgyn lake (Source: University Massachusetts Amherst)

“This could tell us where we are going in the near future. In other words, the Earth system response to small changes in carbon dioxide is bigger than suggested by earlier climate models,” it continues, adding that this includes the last major climate assessment by the IPCC.

The next IPCC report is due in September this year as politicians continue to negotiate a global deal to reduce greenhouse gas emissions.

“We show that this exceptional warmth well north of the Arctic Circle occurred throughout both warm and cold orbital cycles and coincides with a long interval of 1.2 million years when other researchers have shown the West Antarctic Ice Sheet did not exist,” said Brigham-Grette.

The sediment core was taken from Lake El’gygytgyn, 100km north of the Arctic Circle, which was created by a meteorite 3.6m years ago.

A lake filled the crater depositing sediment and tell-tale chemical signatures of the climate. The lake, and its sediment, were not disturbed by early ice sheets, providing a continuous 3.6m year-long record.